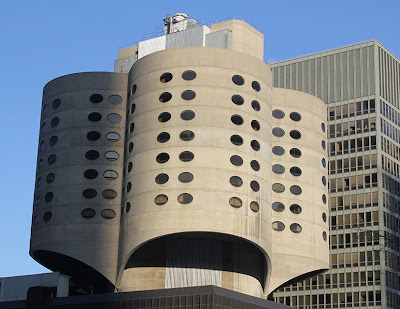 click image for larger view
The last time we wrote about Bertrand Goldberg's brilliant Prentice Hospital, a security guard was trying to tell me I couldn't take pictures of it without getting prior permission from Northwestern Hospital, the building's current owner.  Northwestern has been silent about the structure's future, which is ominous, and the Commission on Chicago Landmarks MIA.

Now there's an ongoing effort by Landmarks Illinois, Preservation Chicago, and other preservationists to save this irreplaceable modern masterpiece, including setting up a Save Prentice page on Facebook.

Today at 12:15 p.m. at the Chicago Architecture Foundation, 224 South Michigan, Preservation Chicago Executive Director Jonathan Fine will be revealing this year's version of the organizations own Chicago 7, the Seven Most Threatened Places of 2011.  I'm betting Prentice should be near the top of the list, especially since Preservation Chicago's website has just posted this new video, including testimony from people like architectural historian Bob Bruegmann, architect Jack Hartray, writer Cheryl Kent, and the architect's son, Geoffrey Goldberg, doing an excellent job of explaining the building and it's centrality to Chicago's architectural legacy.

Great post. And amazing about the security guard who wanted to prevent you from taking pix. I was photographing the exterior of Soldier Field a year ago and a guard came out and told me, "You can't take pictures. We don't allow photography. The building has a copyright."

The video makes a clear case that Prentice was a unique solution, and even a brilliant solution, to the client's requirements, and also it is/was a brilliant piece of craftsmanship and design.
But it can't be used for healthcare now, Northwestern claims.
If a building has no use, should it be saved? I can't say. I would be more comfortable arguing for its preservation if I could see some use for it.

By that standard, at least half of our landmarks would already be toast, including the Auditorium, which was also considered a "useless" building that avoided demolition only because it would have been too expensive. There are many avenues to adaptive reuse - student housing, a hotel for families from out of town staying with patients. Those are only two possibilities that strike me. I'm sure an adaptive reuse professional could come up with dozens more.