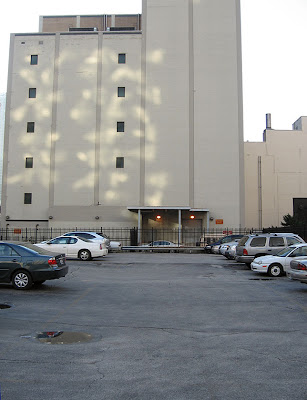 click images for larger view
. . . a long-time surface parking lot employees of the AT&T facility on Dearborn shared with the upscale pigeons of River North.

But, especially after construction began on the massive Hotel Palomar just across the street, the developer had much loftier ambitions for their property.    Still visible on the Weiss Architects web site is  this design for a multi-use tower topped by 35 condominiums. 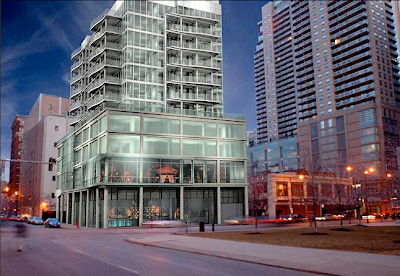 That didn't turn out so well.  Then there was Michael Reschke's 2008 plan to have architect Ricardo Bofill design a 15-floor Gigglesnort Gansevoort Hotel.  After Reschke bailed to concentrate on building the sparkling new J W Marriott hotel out of Daniel Burnham's 208 South LaSalle, Lincoln Park's John Barleycorn pub was reported by Crain's Chicago Business to have signed a letter of intent to build a 20,000-square-foot outlet on the site.  Then they dropped out, choosing, instead, to recently open the second location of their Moe's Cantina concept in part of the Kinzie Street loft complex that was all once the, now substantially reduced, Jay Roberts' Antiques Warehouse.

But God knows you can never have enough good cantinas, and now that's all that's left at 508 North State: a two-story Cantina Laredo #132, the first Chicago outlet for the Dallas-based "gourmet Mexican" chain that's already put down stakes in Rosemont.  According to CB Richard Ellis, which is  marketing the land under the restaurant for a cool $8.296 million, Cantina Laredo has signed a non-cancellable 20-year lease for $560,000 a year, 2% compounding annual rent increases, plus 2% of gross sales above $10 million.  The 17,000-square-foot structure represents about a tenth of what zoning would allow. 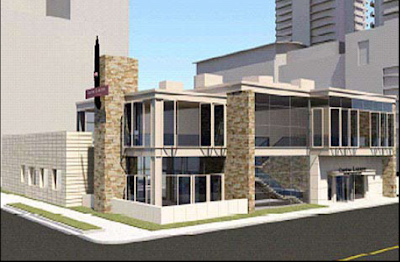 To its credit, the design, also credited to Weiss Architects, will be very open along State, with a prominent glass, mahogany and walnut grand staircase at the center and windows that will fold open in warmer weather.  The exterior of the building seems an homage to the Howard Johnson's on LaSalle. 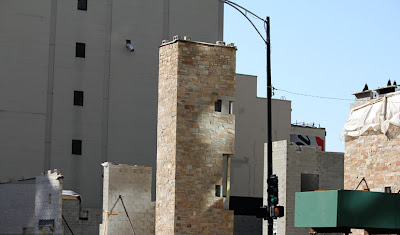 What's interesting is watching how the structure is going up in isolated pieces.  There's the usual ugly concrete block wall along the alley to the north, but otherwise what we have is a series of now disconnected elements dominated by two concrete-block towers, the tallest rising 38 feet, veneered in Tex-Mex ashlar, with openings to anchor the forthcoming steel that will tie everything together. 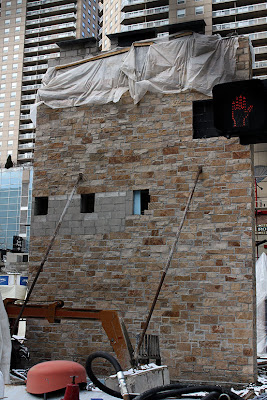 Ross Guthrie said...
This comment has been removed by the author.
10:39 PM

Looking at the rendering, Illinois gets another blank wall. Illinois will just a monolithic wall between State & Dearborn.