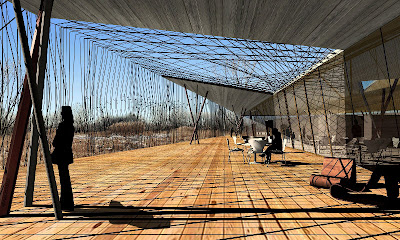 Can you name a single building the two-decade administration of Richard M. Daley put up that's in the great tradition of Chicago architecture? (And don't mention Millennium Park, where everything great was the result of the activism of others.)

His father gave us the Daley Center.  The son gave us Block 37, and the wanton destruction of the Michael Reese Hospital campus.  As being reported by the Sun-Times David Roeder,  Daley's last kick in the teeth to the city he supposedly so dearly loves is the death of the Ford Calumet Environmental Center designed by Jeanne Gang/ Studio Gang.  For the better part of a decade, despite funding of $6,000,000 from Ford, the city has failed to move a single brick toward constructing the spectacular design that won a competition all the way back in 2004.

Now, quietly, the bureaucrats at the Department of the Environment, according to Roeder, are saying the Gang design will never be built, because the original $7.600,000 estimate has soared to $27,000,000.  Except maybe not.  "It's unclear if that includes staff and programming," says Roeder, who doesn't know, and is apparently too lazy to find out.  He simply swallowed the city's line whole.

And of course, the city line is that it's all Studio/Gang's fault, just like Richard M. Daley tried to pin the cost overruns at Millennium Park on Frank Gehry during one of his infamous, petulant press conferences.  What's the truth?  We'll probably never know.

What I do know, however, is that Studio/Gang has made its reputation by creating amazing architecture on very tight budgets in projects such as the SOS Community Center, at the Chinese American Service League.  That is part of the public record.  Also part of the public record is that this is the administration that so mis-managed construction of just one key project that they somehow squandered almost half a billion dollars on a "superstation" beneath Block 37 before giving up and putting it in mothballs, never to open.  I will leave to you which party's motivations are the more reliable.


Most cities would be thrilled to get a first class design by a world-class architect like Jeanne Gang, and would be working overtime to make it happen.  Daley's City Hall takes seven years to find out it's too expensive and then just walks away.

Richard M. Daley's PR machine was relentless in portraying him as Chicago architecture's greatest friend, yet the city's architects spent most of his reign trying to appease what was perceived as his great love of neo-classicism, which he picked up on his junkets to Paris.  With friends like these, who needs enemies?

Daley's architectural legacy is Soldier Field and it ought to be renamed in his "honor."

Block 37 would be another good legacy-name project for Daley.

Rahm has his hands full. Hope he's up to the task.