Laclede's dream: Zbaren and Sharoff capture the afterimage of Three Centuries of Design in St. Louis 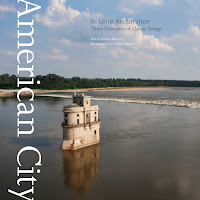 Chicago is the city that absconded with St. Louis's destiny: to become the great gateway to America's western empire. It wasn't to be, but an attractive new book, St. Louis Architecture: Three Centuries of Classic Design, featuring the photographs of William Zbaren matched to text by Robert Sharoff, provides both a concise overview of the city's journey, and a sampling of it's flavorful, often eccentric architecture.

New Orleans was the first city to break into the ten most populous in the United States from outside the original 13 colonies. From 17,000 people in 1810, it exploded to over 100,000 by 1840, when it was the nation's fourth largest city. It's growth was powered by the Mississippi, the great superhighway of the west.

In the next census, however, a new contender entered the lists: St. Louis - the first metropolis from west of the Father of Waters. It was the era of the steamboat, no longer dependant on the current or the winds, moving both people and goods up and down the river at will. Just south of difficult rapids, St. Louis was the northernmost port that could be negotiated safely by the larger steamers. By 1850, more commercial tonnage moved through St. Louis than through any other U.S. port, excepting New York.

At the end of the 19th century, St. Louis became an industrial powerhouse, home to such major corporations as Ralston-Purina, Brown Shoe, Curtis-Wright and, of course, Anheuser Busch. Nearly a decade before John Augustus Roebling did it in Brooklyn, James B. Eads pioneered the use of river caissons and cantilevers to create 1874's 6,442-foot-long Eads Bridge, uniting America's East and West with the first span to cross the Mississippi. He used an elephant to walk the length of the bridge to demonstrate its stability, followed by a test with no fewer than 14 locomotives crossing the span at the same time. Moving beyond the obsolescing steamboats, it made St. Louis a major rail center.

In 1904, St. Louis celebrated as host both to a World's Fair and the Olympics.  As Robert Sharoff notes in his excellent overview of the city's history, no less than Henry Adams said of the Fair, "The world has never witnessed so marvelous a phantasm."  Writes Sharoff,


The highlight was the "Ivory City," a collection of 12 enormous Beaux Arts exhibition halls grouped around a grand basin . . . Except for one - the Palace of Fine Arts - all were temporary structures constructed of plaster and lath.

In fact, St. Louis was always a classicist's town, less anarchic and more dedicated to good taste than Chicago, as can be seen in St. Louis Architecture's shots of Alfred B. Mullet's 1884 French Second Empire-styled Post Office, looking like a fraternal twin to the same architect's Executive Office Building across from the White House in Washington.  Eckel & Mann's 1904 City Hall when even farther back for its design cues, to Paris's 17th century Hotel de Ville.

There was the modernism of Louis Sullivan's iconic Wainwright Building, of course, but when you look at many of the structures in St. Louis Architecture, you often get an uncanny sense of having seen something very like them somewhere else before.    Henry Ives Cobb's 1896 Chemical Building seems like Holabird & Roche's Tacoma Building, redone in brick; Theodore Link's 1910 Rand Shoe Company Building the Wainwright reimagined in limestone; Arthur J. Widmer's 1933 Tums Building the apotheosis of the Bauhaus.

The less derivative structures are the most interesting.  The gracefully ascending setbacks give William C.E. Becker's 1936 Jewel Box an unmistakable elegance.  The unabashed romanticism of Harvey Ellis's 1894 Washington Terrace Entrance Gate makes even the medieval charming and approachable. 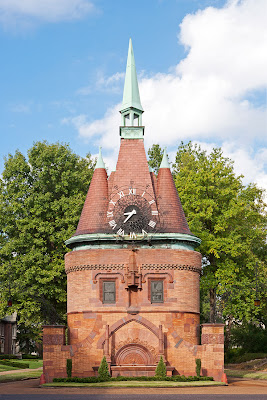 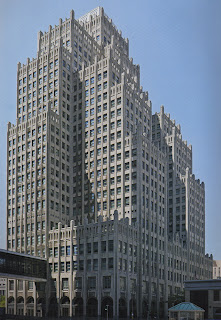 By the last half of the 20th century, modernism finally took firm root in St. Louis.  Minoru Yamasaki created the great white vaults of the 1955 Main Terminal at Lambert Field, and upon his departure for Seattle, his former partner teamed up with George Kassabaum and Gyo Obata, whom Sharoff quotes in 1967 as observing, "Architecture itself is becoming a big business." It was an outlook that no doubt helped make their new firm, HOK, a global powerhouse, "whose work in the 1950's and 60's," writes Sharoff,  "ushered in a mini golden age of Modern design for the city."

In 1955, Eliel Saarinen won the competition to design the soaring Gateway Arch.  In 1939 every structure but one on the 90 acres surrounding it, irreplaceable survivors that defined the city's history back to 1818, had been bulldozed to create the Gateway Mall.   "It is a decision that still boggles the minds of preservationists," writes Sharoff.

The book takes us up to the present day and Maya Lin's and Michael Valkenburgh's Ellen S. Clark Hope Plaza. 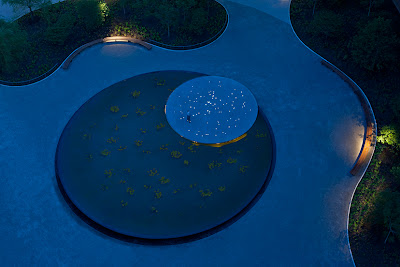 By 1870, St. Louis had become the fourth largest city in the United States. The fifth was Chicago. Since 1860, St. Louis had almost doubled its population, but Chicago had nearly tripled, and there was no looking back. It was Chicago that became the nation's crossroads, and by the time both cities reached their population peak, in 1950, Chicago had grown to almost four times the size of St. Louis, and was firmly entrenched as the Second City of the United States. While Chicago's population showed a steady decline over the next few decades, dropping to less to 2.7 million last year, St. Louis plummeted. It has lost nearly two thirds of its peak population.  The same general trend, however, marks both cities, more density at the core,  depopulation outside.  In St. Louis, many outlying neighborhoods have lost up to 40% of their population over just the last decade, while the small number of downtown districts have experienced dramatic growth.

Still, St. Louis endures, and William Zbaren's photographs in St. Louis Architecture provide a visually compelling portrait.  Shots of Sullivan's Wainwright Tomb are commonplace, but Zbaren also includes a rare view of the highly polychromatic interior, including a sequence of disembodied angels, all wings and head, flitting across the ceiling like a bunch of freaky fireflies.  There's an evocative series of shots of Ando's Pulitzer Foundation, as well as one of HOK's James S. McDonnell Planetarium, looking a bit like the exhaust tower of a nuclear power plant.  Zbaren's photographs serve up the buildings both whole and in detail, and are handsomely reproduced in the book. 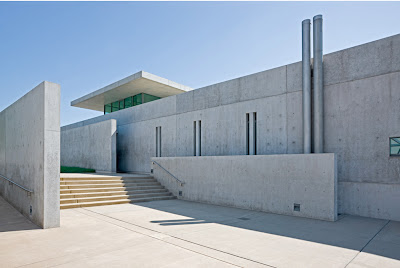 In 1960, a young Fumihiko Maki designed Steinberg Hall for St. Louis's Washington University, where he taught for six years before returning home to Tokyo to metabolize.  Nearly half a century later, he returned in 2006 to design an addition to Steinberg Hall.  Sharoff quotes his attitudes toward the city:


I sometimes dream of foreign cities, but oddly enough never of Paris or New York.  The city that appears most often in my dreams is. St. Louis, and the scene is never of a place I lived in or at Washington University, but of the desolate midtown or some fantastic townscape born of my memory of that place.

Invisible Cities, is what Italo Calvino called them, in his famous novel.  Vanished cities.  Ruined cities.  Cities that never were.  Cities reconstructed and remade out of our own obsessions, out of the selectivity of our memories.  I've never been to St. Louis - I really have to get out more - but the powerful stories and images of Sharoff and Zbaren's excellent St. Louis Architecture insinuate themselves into your mind's eye, lingering, forming, reforming and resolving into your own very personal imagining of a very distinctive place.

Great stuff. Except for this grotesque, can't-decide-if-it's-deco-or-gothic wedding cake. Hardly streamlined. I don't see that it has any of the grace of the Tribune Tower.