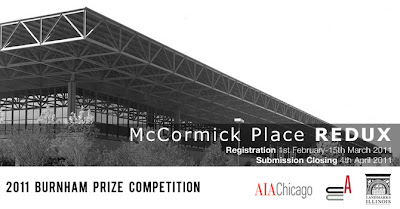 Herb Alpert & The Tijuana Brass was a big, big act when I was very, very small - microscopic, actually.  They are perhaps remembered best today not only for their mariachi-inspired pop mega-hits, but for an album cover featuring the come-hither gaze of a buxom brunette who appeared to be clad solely in billowing clouds of whipped cream. (Ummmmmmm, whipped cream.)

On a cold January night in 1967, I went with my parents to hear the trumpeter and his band in concert in the graceless, cavernous barn of the Arie Crown Theater at McCormick Place.   Later that night, after we had left, McCormick Place burned down.  Yeah, go ahead.  Try to pin it on me.  As if I were some Drew Barrymore Firestarter wannabe.  But believe me, there was no shortage of suspects.  If Arie Crown was a blimp of an auditorium, McCormick Place I, muscled onto the city's lakefront by the Trib's Col. Robert McCormick and Mayor Richard J. Daley, was a beached whale of a concrete bunker, widely reviled.

It lasted barely seven years before its 1967 self-immolation, and rather than rectifying the mistake of the facility's original siting, Daley had it built at exactly the same place.  The difference was the architecture. 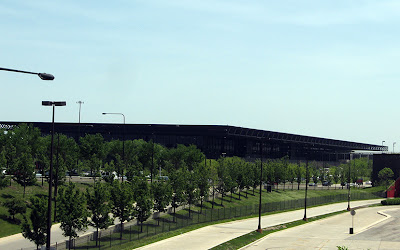 In the 1950's, Mies van der Rohe had proposed a spectacular 700-feet-square, 85 foot high steel and glass, clear-span convention hall, to be built, not on the lake, but at Cermak and Michigan.  It was never to be, but it's legacy was felt when it came time to rebuild McCormick Place.  Mies alumni Gene Summers, working at C.F. Murphy, made the new building a stunning expression of Chicago-style modern.  Blank-walled concrete was replaced by sleek steel and glass, and a spectacular roof with a seventy-five-foot cantilever at the perimeter.  Near the end of his life, Mies had a friend drive him past the new building, and afterwards, through a third party, the master communicated his approval to his student and former associate Summers. 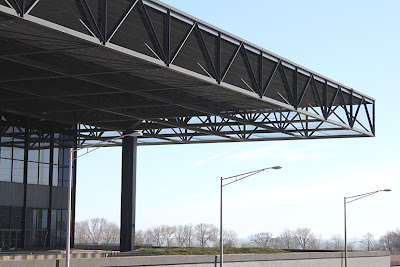 At the time of its 1971 opening, the new McCormick Place was a convention powerhouse, offering over half a million feet of exhibition space, much of it in a single room devoid of internal columns.  As time went on, however, exhibitions, like pretty everything else, just kept bulking up.  Massive new additions in 1986, 1997 and 2007, brought the complex to over two and a half million square feet of space.

In that context, the original McCormick Place, now known as Lakeside Center, is the shrimp of the family, dwarfed by the newer halls to the west, and used left often.  The recent Chicago Auto Show, for example, didn't use it at all. 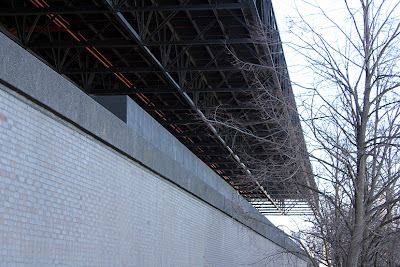 The cost of needed repairs and upgrades for the Lakeside Center have been estimated by the beleaguered McPier to be as high as $150 million, and that's just their opening bid.  In the 1990's, Mayor Richard M. Daley likened it to the Berlin Wall and talked about tearing it down.  No estimates on the cost of that.

McCormick Place REDUX seeks to address the challenges facing the aging conventional hall.  It's the subject of this year's Burnham Architectural Prize Competition from the Chicago Architectural Club, in partnership with AIA/Chicago and Landmarks Illinois.


The “McCormick Place REDUX” competition seeks to launch a debate about the future of this significant piece of architecture, this lakefront site that was effectively removed from the public realm, and the powerful pull of a collective and public claim on the lakefront. This iconic building is caught in the crossfire of a strong, principled, and stirring debate. So the question posed by the competition is quite simple: what would you do with this massive facility? What alternate role might the building play in Chicago should it be decommissioned as a convention hall? And if the building were to go away, how might the site be utilized? What might you do with a million square feet of space on Chicago’s lakefront (along with 4,200 seat Arie Crown theatre)?

Clearly outmoded for its original use, sited on a spectacular stretch of lake-front, and undoubtedly of very significant architectural quality - what visions are there for a resolution?

As I mentioned, today, March 15th, is the closing day for registrations to the competition, which has a first prize of $3,000.00, second prize of $1,500.00 and third prize of $750.00.  The registration fee is $90.00, with a reduced rate for students and CAC members.  Final submissions are due April 4th, with judging and announcement of winners on April 16th. You can find more information on the competition website here.  Just make sure to register today.

Shortly after the competition was announced, McPier's James Reilly sent an email to the Trib's Blair Kamin, stating that,  "While we would certainly appreciate any thoughts about the building because it does need some work . . . "  Some work?  Only a true bureaucrat can describe $150 million as a touch-up,  "Unless someone wants to spend hundreds of millions of dollars to replicate that space somewhere else on the campus, we will have to keep the building, at least the top part of it, in the trade show business."

So, let's see - hundreds of millions of dollars to save the building; hundreds of millions to replicate its somewhere else.  Not much of a choice, is it?  Or is that the point?  It will be interesting to see how the entrants to McCormick Place REDUX negotiate between a rock and a hard place.

does anyone know who the jury is for this competition?