Cacodemon: The End of Cabrini Green 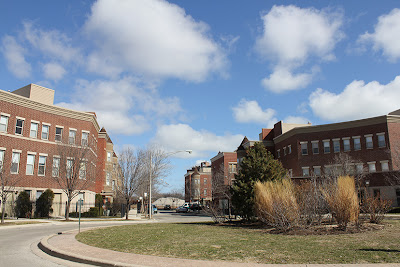 Then you get to Burling, and at the street's far end you see this: 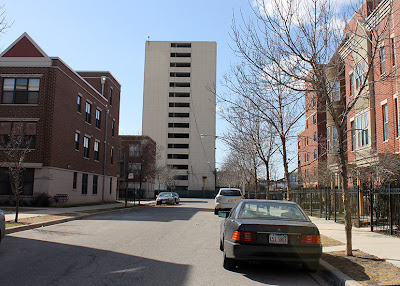 This is Green Homes 1, the last survivor of what was once the sprawling Cabrini-Green public housing complex. It was the slum that refused to die, beginning as a shantytown for poor Irish in the 1850's, followed by  the Germans, then the Swedes. It grew infamous for its overcrowded, squalid living conditions. By the turn of the twentieth century, it had a new name: "Little Hell".

What do do?  Obliterate all traces of it.  Obliterate it from the face of the earth. Which was what finally happened to "Little Hell" during World War II, to be replaced, at first, by the Frances Cabrini Homes, a series of long, two-story townhouse blocks for war workers.

If some was good, more would have to better, yes? In 1958 came the Cabrini Extension, a series of nineteen-story highrises built by the Mies-influenced PACE Associates, a firm that had served as architect of record for such Mies van der Rohe projects such as 860-880 Lake Shore Drive and the Promontory Apartments in Hyde Park. In 1962, the eight Green Homes towers, 15 to 16 stories each, followed. At its peak, 15,000 people lived in Cabrini Green. 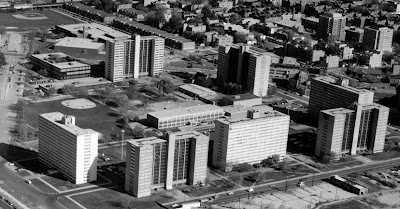 What was originally a source of hope, however, became, over time, a well of deepening despair. Before 1967, half of Chicago's public housing residents had jobs. By the 1980's, it was 10%.  For machine politicians, the dependency of the residents made them a large and reliable bloc of votes, yet expressions of gratitude were few. Maintenance of "The Projects" declined; screening of residents fell by the wayside. Gangs and crime became pandemic.

Although there were many other public housing projects, equally troubled, the very name, "Cabrini-Green" became shorthand for nightmare images of hell-hole high-rises.  When the 1992 terror film, Candyman, portrayed the legend of an evil, murderous spirit, the writers made Cabrini-Green his home.   But reality was the more horrifying.  Just three days before the film's release, seven-year-old resident Dantrell Davis was murdered by a sniper as he was being walked to school. 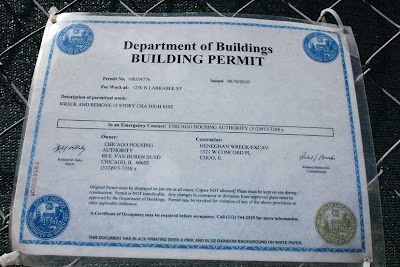 "Little Hell" was back and bad as ever. The answer? Obliterate all traces of it. Obliterate it from the face of the earth.  We're almost there.  The older buildings began to be demolished in the late 1990's, then the Green buildings, until now there is only Green Homes 1, at 1230 North Burling.  The last resident left in December.  The wrecking crane is on site, and final demolition is scheduled to begin March 30th. 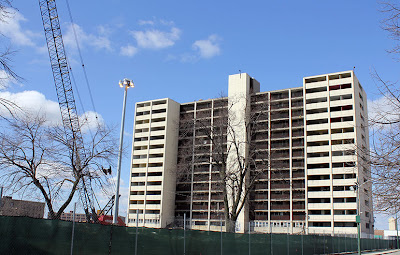 The end won't be one of those spectacular dynamited implosions such as brought down Minoru Yamasaki's Pruitt-Igoe complex in St. Louis in 1972 . . .

. . . just the methodological smash, tear and dismantle, grinding the structure to gravel as it disappears floor-by-floor. 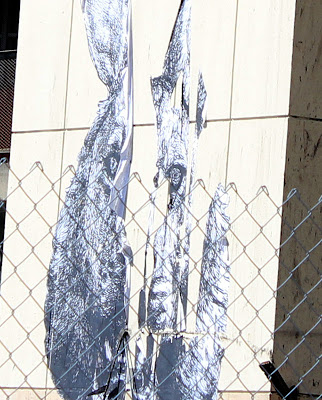 And if you see ghostly flashes of light scattering across the now open grid of the facade, it's not a haunting, but Project Cabrini Green . . .

a public art installation . . . led by the artist Jan Tichy and developed together with Efrat Appel . . . created in collaboration with youth from Chicago, most of them attending educational programs in the Cabrini-Green area and with students from the School of the Art Institute of Chicago.

On March 28th, two days before the beginning of the demolition, 134 self-contained, battery-powered LED modules were placed inside 134 of the building's vacated apartments. The lights will blink every day from 7pm to 1am CST, for the four week duration of the demolition, and will be gradually erased with the building. Each blinking light has a unique pattern. These patterns are a visual translation of poems written and recorded by the youth who attended workshops developed and instructed by Tichy, Appel, and students from the School of the Art Institute of Chicago.

You can see a live video feed from the building here. It will also be on view at the Museum of the Contemporary Art during the demolition. 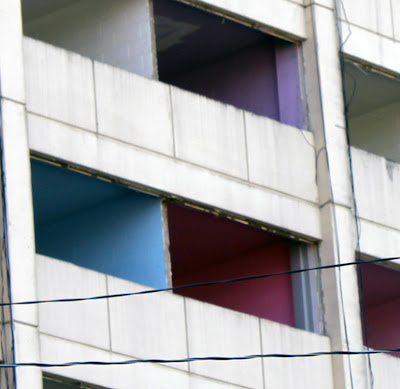 Already, most of the Green complex is a vacant expanse of rubble. The stain of the poor now removed, developers eye the site for pricey new development. Today's Crain's Chicago Business reports that Target is already negotiating for the large parcel just across from Green #1. 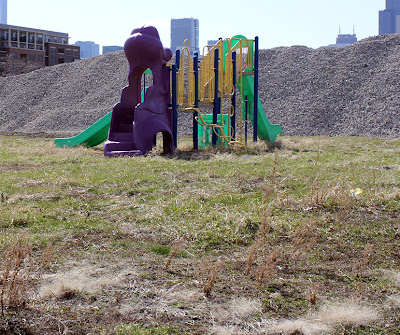 I imagine what it would be like to encounter this scene, innocent of any knowledge of it's history. Of walking past lot after lot of dirt and gravel, and seeing in the distance that last white tower, standing alone in a vast sea of nothing. 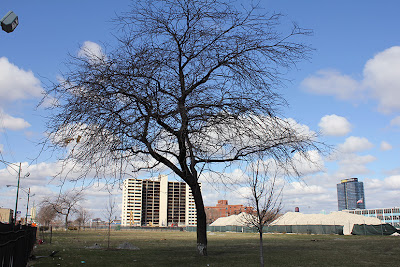 And I think I would sense it, an uneasy feeling in the pit of the stomach. Something happened here. Something that they want us to forget. Something they want to cover over as if it never existed. And in that moment of terrible beauty, the spirit of those who lived, who suffered, who despaired - and dreamed - here, infuses the sunlight, the bright blue sky and cold crisp air of an early Spring day. It bleaches clean the great honeycombed monolith that awaits, impassive and unrelenting, its final obliteration into anonymous dust. 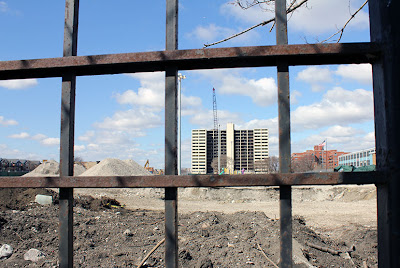 Fantastic article, Lynn. I've been in San Franciso for over20 years, but i still remember the darkness of Cabrini-Green well. Thanks for writing about this so eloquently.

I'm just reading this post today, in San Francisco. I used to live in Chicago 20+ years ago, and remember C. G. in the most chilling way. I wish I'd been more on top of it, and been able to watch the LED art installation when it was going on. Your post with pictures is terrifc. Superb writing, Lynn.

A very good photo essay. Sad to see a grand project fail so badly. Reminds me of Tower Hamlets Ronan Point. Tall towers to house those who would not qualify for housing, slum clearance. Specatcular failure 20 yrs later.