Constructions, Environments and Dreams, at the Auto Show 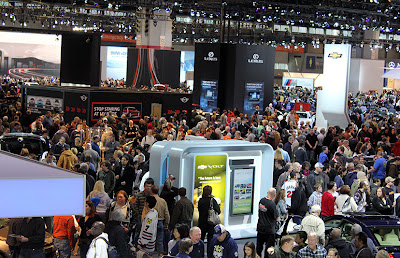 click images for larger view
When Gene Summers was designing the 1971 McCormick Place,  now known as the Lakeside Center, they fought him on using glass: they didn't want any.  They didn't want a glass box.  They wanted a sealed container.  That's the norm for the most halls, including the larger ones built later at McCormick Place, two of which were home to the massive 2011 Chicago Auto Show.

Inside the black boxes, it's a Vegas-like environment.  Natural light never makes it into the core.  It's an all-enveloping black gasket, under the bright sun of thousands of electrical lights, in which all sense of time suspends, an alternative universe in which exhibitors can create their own worlds.

Cars being a big-ticket item, while a few displays carried the look of an accountant's ledger book . . . 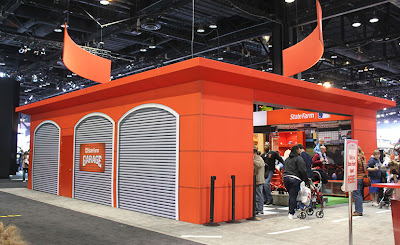 . . . most didn't appear to lack for money. The more modest consisted of architectural flourishes  reminiscent of hood ornaments . . . 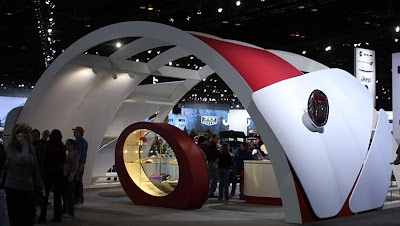 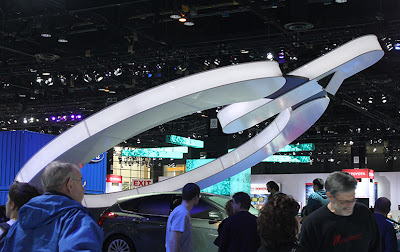 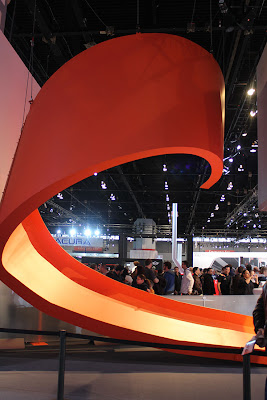 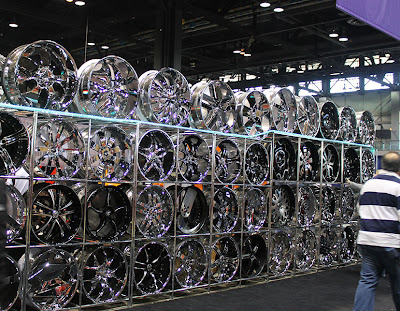 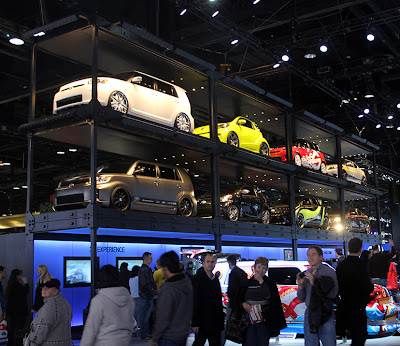 Like moths, we're attracted to the light, especially if it bears cool colors . . . 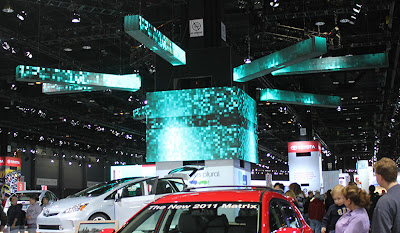 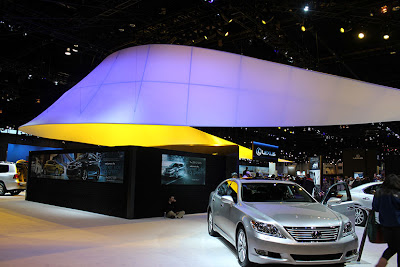 . . . and it's even more mesmerizing, of course, if the light actually comprises a giant video screen.  We like to watch, even if its only talking heads. 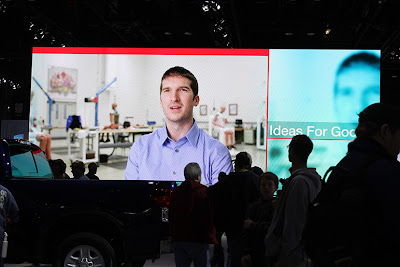 And, by the way, if you were less drawn to the front of the video wall shown below . . . 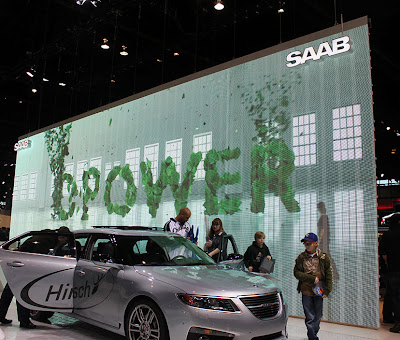 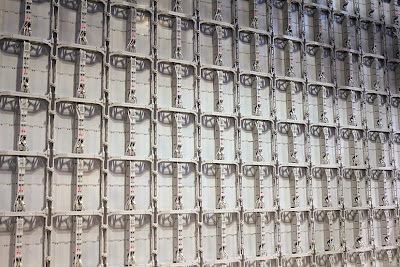 You, too, might be a techno/construction geek.
The larger exhibitors carved out their own environments within the general clamor, with the Jeep taking the strategy of getting your attention, even at the far end of the hall,  by holding something above your head . . . 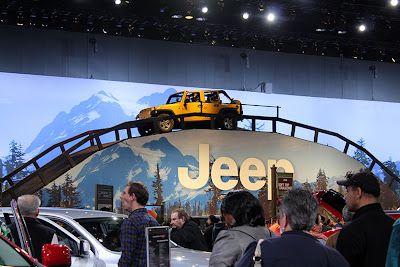 Ford probably had the most striking parti, latching onto shipping container chic, here done up in a striking Yves Klein blue . . . 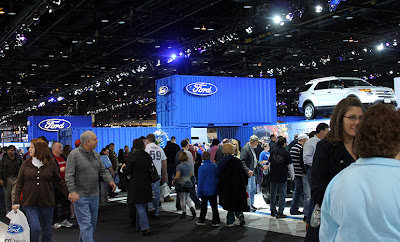 . . . although the same company stumbled in its test drive installation, which in other places at the show offered up the most intense world-within-a-world constructions, but in Ford's case consisted of little more than a metal ramp, a desultory clump of dirt, and lots of bare floor . . . 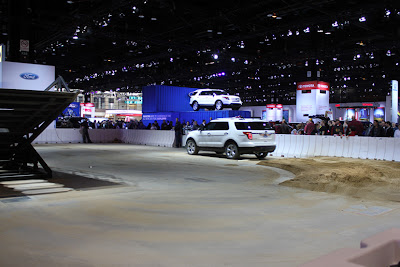 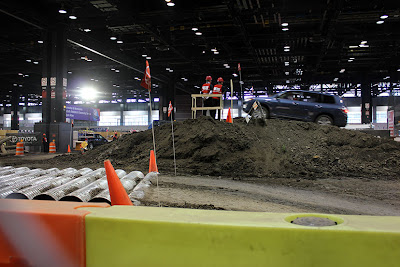 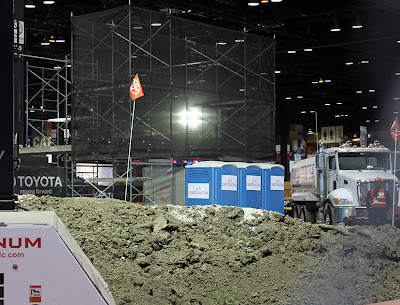 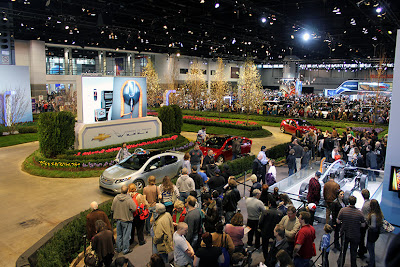 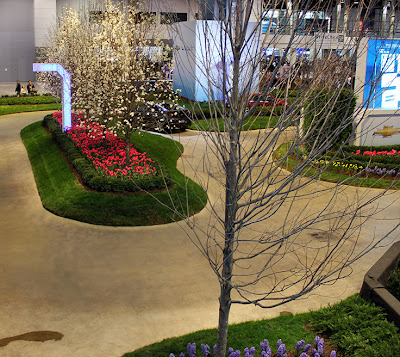 Was this some designers subversive commentary on the current state of the American dream?  Well, even if it was, this year's packed Auto Show demonstrated that it's a dream still very much alive. 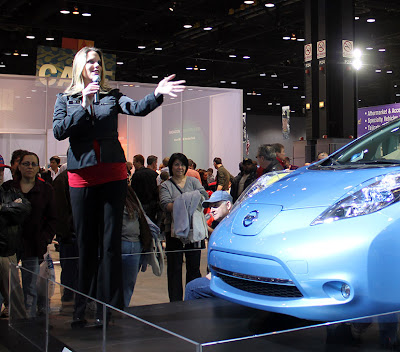 , , , No, not the small army of attractive spokespersons, beckoning us to their wares, but the enduring allure of the chariot of dreams of modern life, our personalized armor, our body ornament, protective shell, hermetic seal against the cruelties surrounding us without, our perpetual means of escape to that better world we can always see in our mind's eye, just around the next bend. 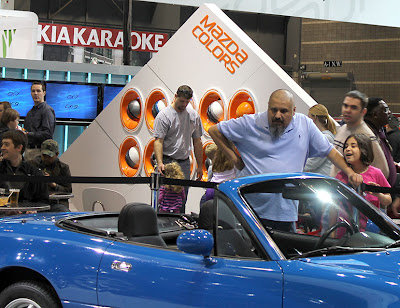