How a Building Becomes a Raised Middle Finger: Stephen Vaughn Shipman's Presbyterian Hospital, in 1888 and today

We've written before about the high quality of research produced by the staff of the Commission on Chicago Landmarks, specifically Terry Tatum, Susan Perry,  Matt Crawford, and Heidi Sperry, with Brian Goeken as editor.  It can be seen again in their latest batch of reports on buildings currently undergoing review for landmark designation.

Lee Bey has recently written about the now beautifully restored White Castle #16 building at 43 E. Cermak, including a couple of handsome nighttime photo's. The Landmarks Commission's 40 page report, however, not only covers the history of the building, and of the White Castle chain, but of the history of working class dining and buildings that served them.  We learn, for example, that while today's entrepreneurs battle both city bureaucracy and bricks-and-mortar restaurants to get food trucks back on Chicago's streets, horse-drawn lunch wagons were a Chicago mainstay in the 19th century and beyond.  The report covers the trend setting Fred Harvey Restaurants, and includes the 1907 cartoon you see here, warning of the dangers of diner food, which could easily be repurposed as a commentary on how our own fast food culture is leading us to obesity and disease. 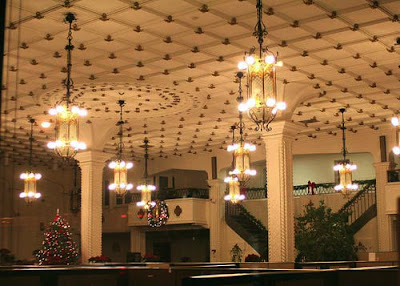 click images for larger view
The report on the Riviera Motor Sales Company Building at 5948-60 North Broadway not only chronicles the handsome building and its spectacular showrooms, but provides a history of how cars have been sold throughout Chicago's history, and provides a richly illustrated account of a time when they were displayed, not in garishly lit car lots, but in surroundings that mirrored the richness of the movie palaces of the era. 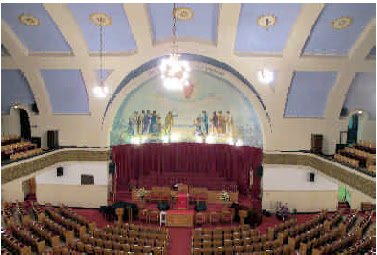 The report on the Ebenezer Missionary Baptist Church at 4501 S. Vincennes Avenue, originally Isiah Temple, Dankmar Adler's last major commission, provides a rich history of the building and its time, both in its early years as a synagogue, and in its much longer service as a house of worship for Chicago's Afro-American community.  There's a biography of Dankmar Adler, floor plans, copious photographs, and a history of the music of the church, which hosted such singers as Mahalia Jackson and Dinah Washington. 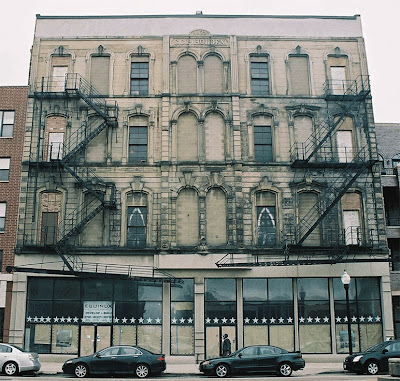 The report on the Italianate 1872 Holden Block at 1027 West Madison, to which Granacki Historic Consultants also contributed, is just as exhaustive.  One of the great things about the Commission's reports is how they'll include biographies of once prominent, but now forgotten Chicago architects.  In the case of the Holden Block, it was Stephen Vaughn Shipman, who moved to Chicago after the Great 1871 fire and remained here until his death in 1905.  His surviving work includes the Hubbard Street lofts that Harry Weese renovated to be the home of his firm, now the offices of Ross Barney Architects.  He also designed this: 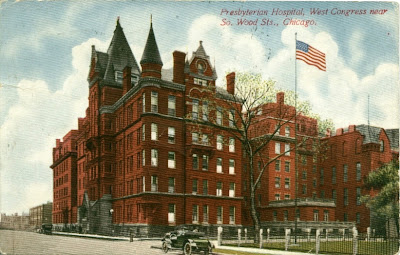 Recognize it?  Probably not.  How about this: 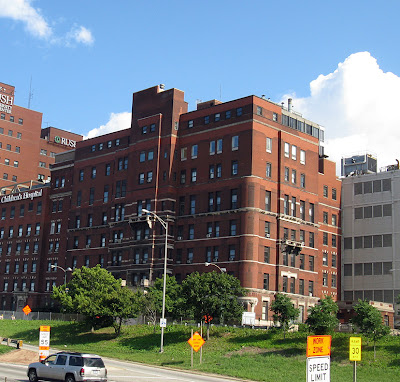 Even if you've seen it, it's the kind of building your mind has probably done you the favor of keeping you from remembering.  And it is, of course, the same building.  It's the 1888 Presbyterian Hospital, at Congress and Wood.  Shipman's original design, while no timeless masterpiece, was a work of care and quality.  What's happened to it since is the opposite.

Sometime in the new century, Shipman's original castellated roofline was removed and three additional stories added.  Postcards often offer an idealized version of the buildings they depict, but this postcard would seem to indicate that the addition, at the time it was added, worked to integrate with the older building beneath. 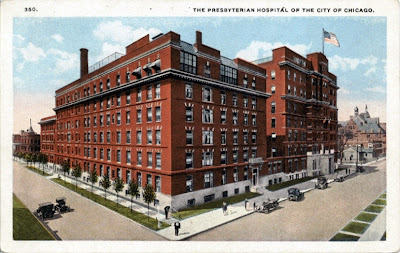 It's a key contributor to making the west side medical center, dominated by the boarded up hulk of old County Hospital, a decrepit and forlorn presence.  The new Northwestern Medical Campus is little better.  Why do medical institutions feel so comfortable in slumming up the city?  It's a good thing that the desperately ill are brought to hospitals lying face up, looking at the ceiling of the ambulance.  If they actually caught sight of the architectural pallor all around them, they'd probably die of depression before they even had a chance to be treated.

The carelessness of the hack job rehab of Shipman's Presbyterian Hospital is truly astonishing.  It's like a giant  Rahmian middle finger held up to everyone who has to look at this building on a daily basis.  Not only are the windows bricked up, making it look like a prison, there was no effort to clean the brick or make the slightest effort to match the appearance of the new to that of the old.  The new brick where old windows were ripped out looks like it was jammed in almost at random, in some places leaving the string course alone, in other cases dismembering them into fragments.  It reads as a series of ugly blotches set in the dirty brick of the original facades. 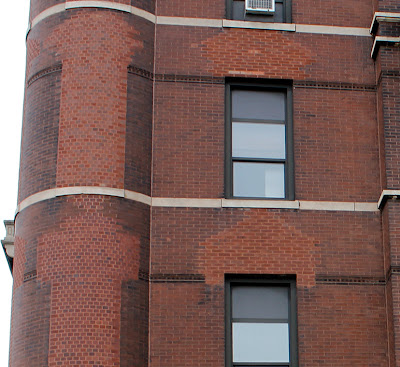 Former New York mayor Rudy Guliani was famous for his "Broken Glass" theory of administration - just a handful of broken windows can slum up a neighborhood and accelerate its decline.  The massive damage incurred by cities in the 1960's and 70's was accelerated by the kind of "who gives a _____" attitude that deliberately made the Presbyterian Hospital Building into a civic eyesore.  If hospitals were as culpable for architectural malpractice as they are for the medical variety, they would have been run out of business soon after "rehabs" like these were completed.

Fortunately, I think we've come a long way since then.  Just a few blocks from the Presbyterian, a new, spectacular, billion dollar (including $75 million of your tax money in TIF subsidies) Rush Presbyterian, designed by Perkins + Will, is nearing completion.  My bet would be is that not long after it opens, all those sad, once grand buildings to the west will disappear into the placeholders of surface parking lots and temporary lawns.  For the moment, however, if you look closely, you can still see remnant elements of what once made buildings like the Presbyterian Hospital the pride of the city. 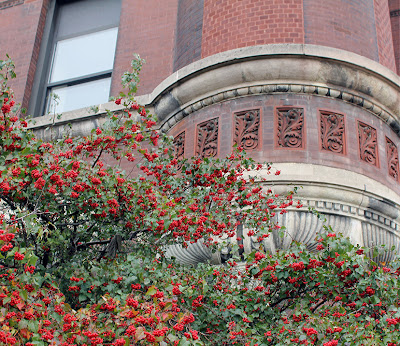 Some of the best, and most entertaining, Chicago history being published today - not just architectural, but social and commercial, as well - can be found in the Commission on Chicago Landmarks Designation Reports.  Check them out here

Great post. Loved your writing and the links to the original documents.

Great pictures of the Manis family's heritage. Went to the Hubbard St.lofts that SVS designed in 1887(I was told), met Carol Ross Barney who works out of one part of the building. Very cool building with lots of interior light thanks to a fire and Harry Weise. Construction is much like our "new" home in Jacksonville.