Apotheosis of the Skyscraper: The Rise of Mies van der Rohe's IBM Building

Do you think glass box skyscrapers are the devil's spawn?  Do you just want to drive a stake through their Miesian heart?  Well, you may be in luck.  A  new report from ‘green’ consultants Terrapin 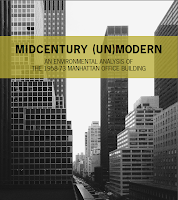 Bright Green proposes demolishing and replacing pretty much every Manhattan skyscrapers erected from 1958 to 1973.  (Maybe keep a couple like Seagram and Lever House as souvenirs, charms on a cheap bracelet.) Terrapin says all those modernist towers constitute a lost generation, too energy inefficient to ever be made environmentally responsible.  And it must be true because they're not only ‘Green’ but ‘ Bright Green’.  They say you can replace all those buildings with 44% more square footage and expend 5% less energy.  Developers - not to mention architects contemplating those juicy replacement projects - are salivating.  And all that embedded energy that would be lost in the carnage?  Fuggaedaboutit!  It'll be recovered by the replacement buildings in just a decade-and-a-half.  Or maybe three.  Just in time for a new generation of hucksters to discover how all those structures the Terrapin report is shilling for harbor defects so offensive to public morals that they, too, must be consigned to the chopping block.

Given how Chicago seems increasingly to judge itself on how close we ape New York (see streets turned into canyons and forward-facing subway seats), is it only a matter of time before we can rid ourselves of all of our own Miesian towers?  Illinois Center?  Equitable and Metcalfe?  The Daley and Federal Centers? Dump 'em all in the lake and let 'em sink like Crown Hall in Stanley Tigerman's The Titanic.

Only don't expect the IBM, the Mies van der Rohe skyscraper now known by its address, 330 North Wabash, to be anywhere near the beginning of the line.  Not only, as we wrote previously, is it much more energy efficient by virtue of being one of the first curtain wall designs in Chicago to include a thermal break, the building is adapting to its times in ways previously unimagined.  Conceived as an office building, a large chunk of floors are in the finishing stages of conversion into the Langham Chicago hotel, set to open in July. (More in Part Two)

The story of the IBM is a case study of how the confluence of design, technology and real estate create a great skyscraper, and how it is used, abused and adapted it over time.

In the 1950's, no corporation said ‘modern’ more than IBM.  Making its Chicago home a 1913 building at 618 South Michigan, it replaced the Burnhamesque classical facade with a flashy glass curtain wall.  By the mid-60s, in the throes of explosive growth, IBM was looking both for more space and to make a architectural statement. 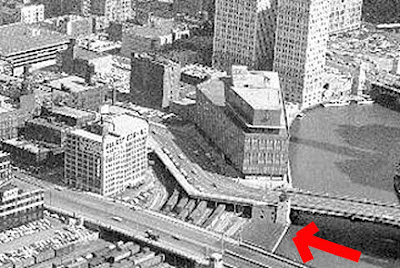 In 1967, the company entered negotiations to buy 1.5 acres at Wabash along the north bank of the
Chicago River.  It then hired the most famous architect in Chicago, Mies van der Rohe, for what would be his last skyscraper design.  When the 80-year-old Mies was taken to the location in his wheelchair, he gazed down at what was originally a crowded railyard and then an abject surface parking lot, and was said to have remarked “Where's the site?”

The challenges were many.  The site was pinched in at the center by the angled right-of-way of Wabash Avenue.  The IBM property had been acquired from Field Enterprises, then the owners of the Chicago Sun-Times, which  in 1957 had opened a new headquarters building, designed by Naess and Murphy, just across the street. As part of the sale, the Sun-Times retained the right to use below-grade space on the southward portion of the IBM site as a storage facility for huge spindles of newsprint, making it impossible to address the river in any meaningful way.  The new building would also have to be constructed so as to not disturb the below-grade train tracks that brought in the newsprint.
To accommodate the part of Wabash avenue that cut into the site, Mies had originally come up with a very un-Miesian design, reduced at the center and wider to the north and south.  “We of course rebelled,” said architect Dirk Loan, Mies's grandson, who had come to work in his office.  “We said why don't we go and talk to the city about IBM acquiring it.  And in the end, they did.”  And so the tantalizing idea of a Mies ‘U-shaped’ building faded forgotten into history.  The standard central elevator core was, in the IBM, split into two to accommodate the rail tracks running beneath the building.  Along the river, a shear wall drops from the plaza to the river, with a desultory staircase leading downward close to the bridgehouse. 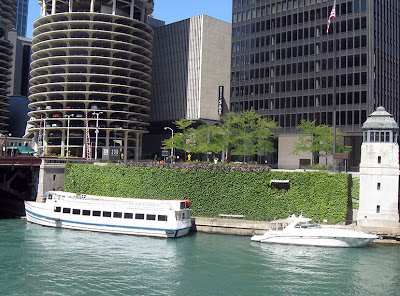 The building that Mies created tends to be ranked by historians in a category below New York City's Seagrams or 860-880 North Lake Shore Drive, but the IBM remains an urban masterwork, taking command of the site with grace and proportion - 275 feet by 125 feet by 695 feet high, set back from the river by a generous plaza. 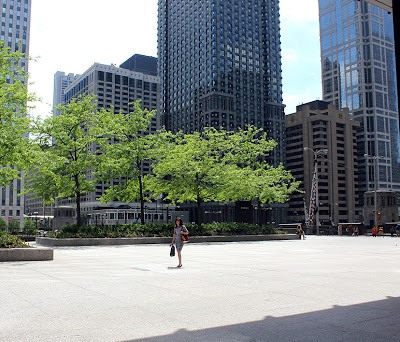 Mies liked to put his buildings on a plinth, but at the IBM, that plinth is almost mannerist, dictated by the strange surface conditions of downtown Chicago, where much of the city was raised up out of the muck over a century ago.  As it runs past the IBM, Wabash Avenue, like Michigan Avenue to east, is raised a full story above the natural level of the city, and it's flush with the IBM's ground floor.  State Street, however, to the IBM's west, starts off closer to natural level, and gradually rises up to meet the level of the State Street Bridge. 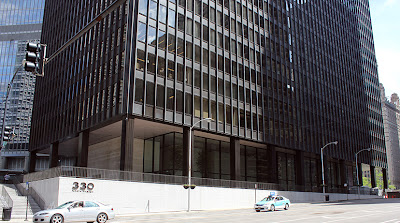 At the IBM's south plaza, State Street is a few steps up from the street, but by the time it gets to the to the north edge of the building's site, it's a full level lower.  A grand granite staircase rises from street level up to the building's smaller north plaza. 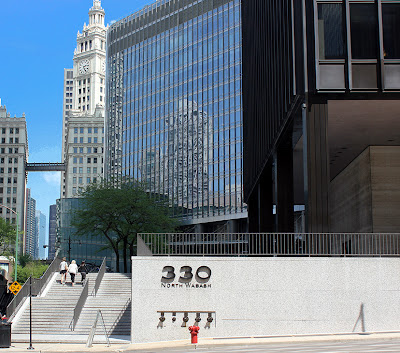 The story that the IBM was deliberately placed to block views of non-Miesian round towers of Bertrand Goldberg's Marina City from Michigan Avenue was countered by project director Bruno Conterato, who said the IBM's placement was designed to relate both to Marina City and the Sun-Times Building.  “By going well back on the site,” he told Inland Architect, “we in effect set up a line of three towers, since the Marina Towers are canted on their site, with the east structure farther north than the west one.” 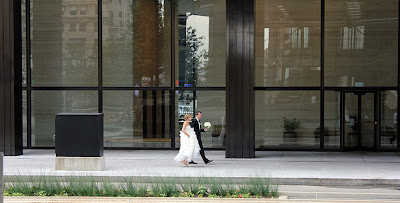 The lobby floor is a soaring 26 feet high. “We could have attempted to alter the lobby's height,” said Conterato, “to achieve a perhaps more human scale, but that would have ruined the overall scale of the building.  It would have looked like a sawed-off building if we had designed a lobby less high.”

As in other Mies skyscrapers, the effect of that open, clear lobby is to ‘dematerialize’ the building.  The curtain wall stops at the lobby's ceiling.  The outer columns descend to the ground, forming an open arcade around the recessed, glass-enclosed lobby.  At night, the dark tower seems to float above a pillow of light. 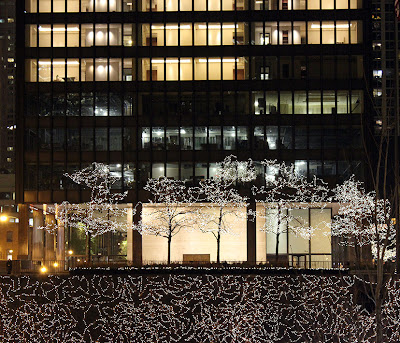 The elevators are faced in travertine, with Conterato traveling to marble quarries near Rome to supervise the cutting of the stone so that the grain would match perfectly across the panels mounted in the lobby.  The same granite and gridlines of the lobby flooring extend under the glass and out onto the plazas in a continuous flow.  All standard Miesian touches.
There are a couple things, however, that are a bit different about the IBM.  The cladding is not the bronze of the Seagram or painted steel of the Federal Center, but bronze-anodized aluminum.   At the Federal Center, the window frames are recessed from the spandrels; at the IBM, it's the spandrels that are recessed and the window frames that are raised, providing a more articulated facade, especially when embroidered with snow. 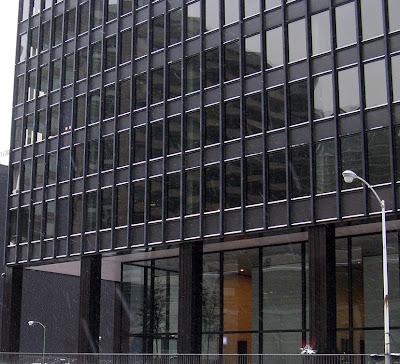 Even so, the IBM could be said to be the apotheosis of the Miesian skyscraper.  It's perfectly autonomous - no bustle like at Seagrams or offset towers as at 860-880.  It's set on its own hill, like the Acropolis.  Although now hemmed in by the Trump Tower to the east, the open view along the river is inviolably powerful.  Base, shaft and capital (mechanical floor) all in one volume, a perfect grid both in plan and section.  Windows, taller than wide, in continuous ribbons between brawny spandrels that lock in the horizontal even as the trademark Mies i-Beam mullions, rising from top to bottom in unbroken sweep, proclaim the vertical like a hundred arrows pointing heavenward. 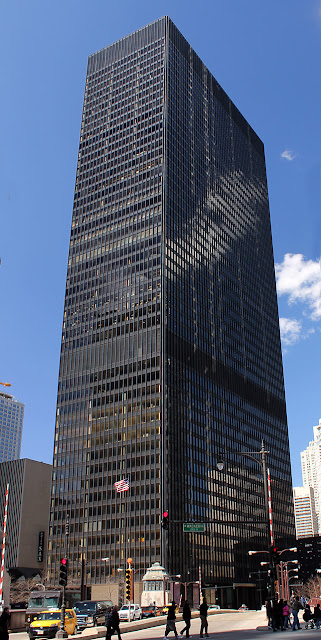 Has any other architect  - including even Louis himself - ever bested Mies in realizing Sulivan's vision of the tall building as ‘every inch a proud and soaring thing, rising in shear exulation that from bottom to top it is a unit without a single dissenting line.’?

NEXT:  The IBM Goes from Lost to Soft

lynn, this seems to be the year for 'reworking' mies' pieces. along with the hotel work going on at the ibm, i hear that iit is gearing up for a 'major' reworking of crown hall.