Direct from Venice! Provocations for Chicago's Urban Future and Spontaneous Interventions, plus still more events for May!

Yeah, I know we're in the last three days of the month, but we're still adding great stuff to the May Calendar of Chicago Architectural Events.

Today (Wednesday the 29th),  it's all about movement as DePaul's Chaddick Institute will be presenting a brown bag lunch with Jim Giblin, on A Railroad for the 21st Century:  The Illiana Rail

Bypass Concept.  5:30 p.m. at the Cultural Center, GOOD Chicago Studio is sponsoring a panel, Building the Future of Bus Rapid Transit in Chicago, with Ron Burke, Joseph Iacobucci, Steve Schlickman and Christopher Ziermann, with RedEye's CTA Reporter Tracy Swartz as moderator. Over at the Cliff Dwellers at 6:00 p.m., Friends of Downtown will be giving out their Best of Downtown 2012 Awards.  At 12:15 p.m. the CAF lecture on the Adaptive Reuse of the Viceroy Hotel, with Hume An and Jeff Bone, will also be streamed live here.

We should also mention that there are two new exhibitions open on either side of Randolph.  In the Expo 72 Gallery at - logically enough -  72 East Randolph, there's City Works: Provocations for Chicago's Urban Future, a collaborative effort by five teams whose members including David


. . . re-envisions a series of urban environments that are typical for Chicago in order to examine alternatives to the way architecture engages the city . . . [a collaborative effort] determined to find potentials for spatial, material, programmatic, and organization invention within the city.  Curated by Eisenschmidt, the installation involves large urban models of proposals for Chicago as well as an encompassing panorama drawing of historical visionary projects for the city.  Over the duration of the exhibition, the models will travel throughout the gallery, visit the different parts of the city's visionary history, and, finally, come together to create a new collective city. 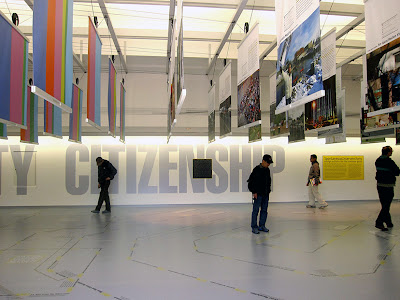 Meanwhile, over in the Michigan Avenue galleries of the Chicago Cultural Center, Spontaneous Interventions: Design Actions for the Common Good features 84 urban interventions . . .


. . . initiated by architects, designers, planners, artists and everyday citizens that bring positive change to neighborhoods and cities in addition to a pop-up installation in Millennium Park. Chicago is the first destination of the installation, which served as the U.S. representation at the 13th International Architecture Exhibition at the Venice Biennale (2012). The Chicago installation will recreate the lively exhibition design of

pull-down banners, created by Brooklyn design studio Freecell and Berkeley-based communication design firm M-A-D. The contents of the exhibition have been updated to include more recent and more local projects, more than a dozen from Chicago.

Organized by Cathy Lang Ho on behalf of the Institute for Urban Design, is devoted to the growing movement of architects, designers, artists, and everyday citizens acting on their own initiative to bring improvements to the urban realm, creating new opportunities and amenities for the public. The exhibition received over 178,000 visitors in Venice, and earned a Special Mention from the Golden Lion jury, the first time the United States has been honored in the history of the Venice Architecture Biennale. 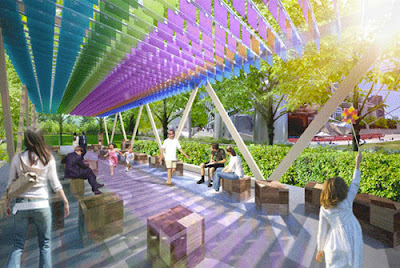 Spontaneous Interventions will include a pop-up “outdoor living room” in Millennium Park, designed by Chicago-based MAS Studio, led by architect Iker Gil. The space will serve as an outpost for the exhibition and a venue for exhibition-related programs, including talks, panels, tours, workshops and more. The space will feature a colorful canopy and seating made of salvaged lumber by local artist/woodworker John Preus of Dilettante Studios.

Both of the shows are up for viewing now, and will have their official opening receptions Friday, the same evening the Graham Foundation has a reception with guests the ubiquitous Mr. Tigerman and Board President Hamza Walker to announce the Graham's 2013 Grants to Individuals.

S.I., as we initiates call it, will also be sponsoring an ambitious range of talks, workshops, curator walks, walking tours and symposia in conjunction with exhibition.  There are almost a dozen events this coming Saturday and Sunday, June 1st and 2nd, including but not limited to the participation of Teddy Cruz, Roberta Feldman, Michael Sorkin, James Rojas, Iker Gil, Robyn Paprocki, Douglas Burnham, Nathan John, John Preus, Stephen Zacks, Anne Guiney and others.  It's all on our June Calendar, coming soon, but if you can't wait, you can also check out all the details here.