It's like the the folks over at the Chicago Cultural Center were trying to keep it a secret, but this Saturday, May 18 at 10:00 a.m. marks the opening of a highly anticipated show on the work of Alfonso and Margaret Iannelli.  Best remembered today for Alfonso's collaboration with Frank Lloyd Wright on Midway Gardens, the Iannelli's actually had over half a century of making interesting art.

The last time I checked, the show was a collaboration between Chicago Cultural Historian Tim Samuelson and scholar and collector David James, author of  a companion book, Alfonso Iannelli: Modern by Design, scheduled to be published this coming July.  (I had the privilege of previewing some of the pages, and it looks to be spectacular.) 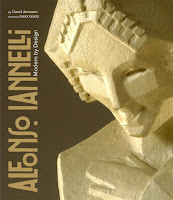 No curators are mentioned in the  sketchy information on the exhibition's page on the Cultural Center website, but I can't believe either Samuelson or Jameson had anything to do with the shockingly inane description that manages to say nothing of the qualities of the art but tries to sell the show as some kind of pulpy True Romance . . .


Opening on May 18 and continuing through August 27 in the Chicago Rooms at the Chicago Cultural Center, (78 E. Washington) is Modernism’s Messengers: The Art of Alfonso and Margaret Iannelli – 1910 to 1965.  In this show, one discovers not only the love they both had for modernism, but also the love that they had for each other.

Despite very different backgrounds and very different approaches to life, their work together and apart displayed such a partnership that one could not tell where Alfonso’s work ended, and Margaret’s began.

Yep, that's the entire description.  There's more information on the press release, which reveals near its end the real reason we should find the exhibition interesting. It's because the show . . .


emphasizes a strong tenet of the Chicago Cultural Plan which is attracting and retaining artists. That is a practice in Chicago’s history and a goal of today. Additionally, this exhibit promotes the values and impact of culture and fosters cultural innovation. 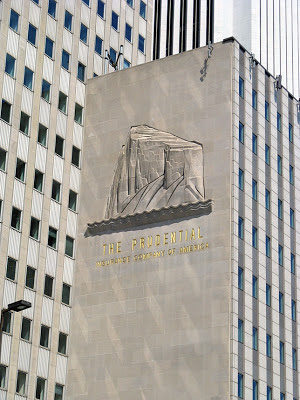 Ah yes, heaven is the land of a bureaucrat's non sequiturs.  The Iannelli's lived to confirm the tenets of the Chicago Cultural Plan, apparently now the high point of human evolution.  Along with “the values and impact of culture’” and “cultural innovation”.  And “modernism”. Mustn't forget modernism.  And motherhood, and cuddly bunnies.  Did I mention there might also be some art involved? 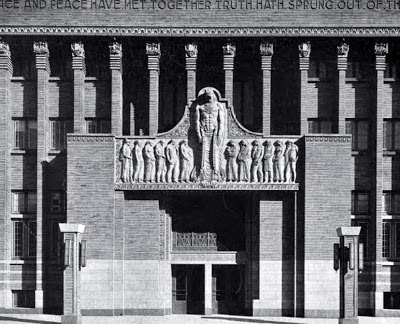 Actually, the personal saga of Alfonso and Margaret is a dramatic and poignant story, but if that was all they had going for them, we wouldn't be remembering them now.  The work, ultimately, is what matters, and in the case of the Iannelli's it's fascinating stuff.  I expect to be at the front of the line to check it out on Saturday.  To get you started, here's a couple of our past articles:

Read:
Artist Rediscovered - Alfonso Iannelli: Modern by Design
Iannelli (and Wright) out of the Storeroom