Foul Ball Hotel: the In-Your-Face Mediocrity of the Wrigleyville Sheraton


Tom Ricketts officially revealed renderings for the Wrigley Field and environs rehab at a City Club breakfast Wednesday morning.  Inside Wrigley, the most prominent change is the addition of a 6,000 square foot Jumbotron screen.  The terra cotta along Wrigley Field's roofline is also scheduled to be restored, and there's a large number of adjustments designed to improve basic functionality.

At least for the moment, I'm leaving the critique of changes to the actual stadium to the Trib's Cheryl Kent.  (Although if she thinks the Landmarks Commission will do anything other than roll over for whatever plan Mayor Rahm Emanuel signs on to, I've got a big shiny bean to sell her.)

I do want to say a couple words about the 175-room Sheraton hotel the Ricketts want to build across the street from the stadium, where a McDonalds currently stands . . .

It sucks.
I think that's pretty clear even from the rudimentary renderings released so far.  The office structure to be built to the north isn't much better, but at least it has a couple of doo-dads - a rounded ramp building and a tall clock tower - stuck on to provide at least a pretension of personality.
The hotel can't even be bothered with such minimal gestures.  It looks like a parking garage with balconies.  The design makes SCB's design for a mega-development south on Clark look like Pritzker-Prize winning work.  At Wednesday's presentation, the spin was how the hotel is in ‘harmony’ with Wrigley across the street.  And if you're looking to memorialize the cheapness of P.K. Wrigley, I guess you've got a point. (A January Tribune article cited Rebel Roberts and VOA as project architects.) 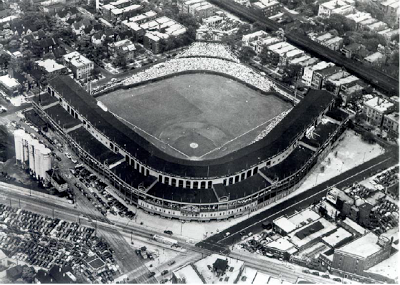 What was originally Wrigley's charm - an old school stadium smack dab inside a working class neighborhood - is evolving, perhaps inevitably, into a supply-chain designed sports complex.  Oozing like The Blob, it absorbs more and more of the surrounding community.  An untidy, diverse but sub-potential economy of multiple businesses finds itself squeezed out by a centrally controlled, precisely engineered profit engine, constructed out of a Disneyfied historicism reeking nostalgia for a time that never existed.

This is the way the world works, and it would be naive to believe Wrigleyville could somehow be exempt.  With 35,000 square feet of new, state-of-the-art advertising, the area west of the stadium will become a little bit of Ginza on Clark.  All the more reason, then, to embrace the reality and reject mediocrity masquerading as contextualism. The current design for the hotel is ‘like’ Wrigley Field in only the laziest, most cynical sense.  This is one of the most visible corners in Chicago.  Can we please get a building that frankly addresses the needs of its program with a honesty that honors rather than mocks Chicago as a place where relevant architecture can still be made?

What is up with you, dude? Such incoherent droning about a CONCEPT of a building that exists on paper within a FRAMEWORK of an overall PLAN of what MIGHT get built. I mean, seriously, could you be more melodramatic in your writing? You even included a 71-word sentence. Get laid. Pay for it if you must.

I think that 71-word sentence is a beauty, especially the big punch at the end about "a centrally controlled, precisely engineered profit engine constructed out of a Disneyfied historicism reeking nostalgia for a time that never existed." Way to go!

Oh my God. I AM a gullible rube! I didn’t even get that there was a conspiracy going on here. Please, tell us what it is! The suspense is killing me!

If you think this is just "a framekwork", I've got an overpriced season ticket to sell you. I can understand how years of devotion to the Cubs may have left you unable to recognize mediocrity when you see it, but the fact remains that this is a very crappy design that demeans the neighborhood and insults both fans and the city.

P.S.: I've rewritten the sentence in question. Let me know what you think.

It took a few revisions to get the never-built Triangle Building looking good. I'm sure it'll be the same here. I think the problem is there's no idea being expressed here. Think about the difference between old Comiskey and Weeghman Park. Same architect, Zachary Taylor Davis. Comiskey was designed to be the "Baseball Palace of the World", where Weeghman was more like the baseball erector set. Save for replacement of the stands early on, a coat of whitewash and some Bill Veeck changes, Comiskey was recognizably the same park start to finish. Wrigley has been in a constant state of evolution, it was a stripped down frame that's had different elements added, subtracted, and rearranged. A muscular, but scrappy character. Both parks represented Chicago architecture - Wrigley's stripped down nature in some ways goes with the International style, while the later wrought iron gratings have some tenuous connection to the applied ornament at Carson Pirie Scott. To develop an architecture representing historic Chicago baseball, you need to emphasize that steel frame, with detailed brickwork, arches, and stucco. That lets the hotel reinforce the character of Wrigley, instead of being soulless and inert. Pattern the semi-triangle building and Captain Morgan pavilion after Los Angeles' Wrigley Field, which was after all a refined revision of our Wrigley, with a Spanish roofline and a sleek clock tower. These buildings need to proudly say Chicago and Historic Baseball. With the right architecture, it will really feel like the baseball mecca it should be.

great points, BW, plus some history I wasn't even aware of. Here's a link showing L.A. Wrigley. http://en.wikipedia.org/wiki/File:Wrigley_Field_Los_Angeles_Opening_Day_LOW.jpg

Also I still really hate the bridge. The surface parking lots have ensured that, aside from the Metro, most of the energy peters out north of Addison, especially on the east side of Clark. This development will eliminate a good chunk of these lots, but a bridge will introduce a visual barrier, much like the el cuts off development on Addison. I'd like to see the area on Clark north of Addison develop into the more grown-up part of Wrigleyville - less drunks, more restaurants.

The sentence in question didn't need rewriting. Sometimes you've got to go with the flow, and take the reader along.

that's just what Proust told me!

I’d have to agree with Lynn. Architects have too much freedom and the more that we neighbors get involved with the minute details right from the onset the better. As a Wrigleyville resident I wish that the design process would include a committee of stakeholders so that no single individual would hold too much sway. We could vote on every detail in a democratic fashion. This might be a preliminary design but I don’t think that it can be jumped on soon enough.
--Patterson Racine

Let's accept for the moment that it is a "preliminary" design. By its very definition, that means it needs to evolve. (And, satire aside, I'd suggest that this isn't a case of architects having too much freedom, but too little. VOA is capable of quite striking work - see the Roosevelt Dorm or Old Town School of Folk Music - but my bet is that the Wrigleyville hotel, office building and plaza design was hamstrung by a focus-group like laundry list of what people think has worked before.)

"Patterson Racine": I am going to try to be as polite as possible here. Your idea of having neighbors vote on every last idea is one of the most terrible ideas I have ever heard. I am an architect, and I can tell you that even when you get too many people from the client side involved in the design process it becomes almost impossible to navigate through everyone's personal taste. Having neighbors congregate, debate and vote on the merits of design....just, no. Nothing good and productive would ever come from that. Everyone is entitled to their opinions, however those opinions should not necessarily dictate how a private entity spends their money, especially when it just comes down to aesthetics as it does in this case. I realize that you live only a block away and you feel that your voice should count for something, and if this was done with public money and involved public infrastructure or a public building, then I could maybe see some validity to your reasoning. I can only hope that your comment was severe sarcasm that didn't translate as such in the digital realm and instead came off as blind naivete.

From the professional side of things, I am not a fan of the images, and the little, single tree is hilarious. Let's try to keep in mind that that is all these are right now, too: images. Throughout the following months the design will develop and change little by little as the DD and CD process proceeds. It is an inevitability of the design process as a whole. As unfortunate as the designs seem to be, I also understand that trying to mitigate the minefield of client relations, dealing with entities that understand almost only upfront cost and not how spaces will "feel" and how that may actually lead to a more successful development, is difficult at best. The client(s) that step back, trust your opinion and expertise and allow you as an architect to find that transcendent medium between aesthetics, cost-consciousness and context are few and far between. The clients that allow you to then explain your reasoning and allow your reasoning to help weigh their opinion are even more rare. I am guessing that this was not the case here.