Two must-sees, Gatsby (if only for the architecture); Orson Welles' Chimes at Midnight tomorrow at the Music Box

One production had no money; the other had it coming out of its ears.

Critics are generally roughing up Baz Luhrmann's new version of F. Scott Fitzgerald's The Great Gatsby, but from an architectural standpoint, if nothing else, Production Designer Catherine Martin's creations are well worth a view.  Watching the film is like gazing at the world through a pair of Walgreen's magnifiers.  Gatsby's doesn't just live in a mansion, but a flapper age Schloss Neuschwanstein.  The party scenes set new records for population density - you get the impression that even Busby Berkeley would have taken one look and said, “too much.” 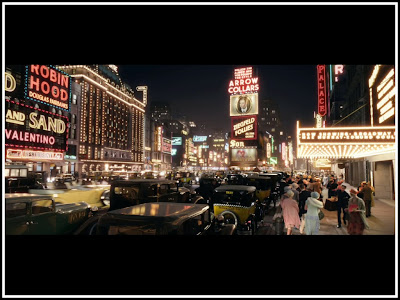 The CGI recreations of 1920's Manhattan are hyped versions of the originals, but that doesn't make them any less breathtaking.  You want to freeze those shots of Broadway or driving down the street beneath the ‘L’ and just drink them in.  And I don't really have any problem with the mixture of Gershwin and hip-hop on the soundtrack, which, in the words of the film's musical supervisor Anton Monsted, creates “the effect of, almost, sliding doors between very contemporary sounds and sounds that the characters in the film would have heard realistically at the time.” 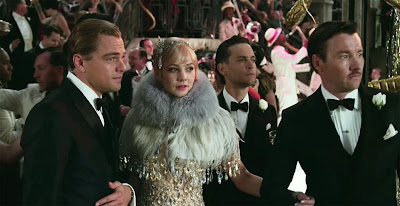 In a way, it's disorientating, but in this context, it works, just as Luhrmann's breathless editing style works, putting the audience inside of a dizzying time and a dizzying place, a party aboard a runaway train, not unlike the world we find ourselves in today.  I can't say how much of it was intentional, and how much was a happy accident, but the theatrical gestures take you in even as you laugh inwardly at their excess, and, at least for me, the big scenes packed an emotional punch.

A lot of the reviews of Gatsby center on how true the film is to the original novel, which to me is so wrong-headed as to question the capabilities of the reviewer.  Ultimately, whatever its source, a work has to be true, above all, to its medium.   Film as transcript - a ‘clean’ translation - is impossible. Any such attempt winds up only betraying both novel and movie.

The thing I remember most from Jack Clayton's 1974 version of The Great Gatsby, with Robert Redford and Mia Farrow, is the scene between Sam Waterson's Nick Carraway and the ineffable Roberts Blossom as Gatsby's father.  Without a single flashback, it evokes Gatsby's origins, the gray working-class reality he so desperately wanted to escape, with a palpable sense of mingled dread, unease and regret.

That scene didn't make the cut for Luhrmann's Gatsby, which, in contrast, is like a speeding skiff skipping along the surface of the water.  You get drawn into the frenetic energy of the big parties at Gatsby's mansion and lifestyle.  You feel like you've fallen into a perpetual motion machine set at warp speed.  It's the ketchup in which Luhrmann often drenches his films, but in the context of this story, it's pretty much a perfect fit.  Where is it leading, what is its purpose, how do I get off?  You're left anxious and a bit exhausted even as you're enthralled.

When you enter the old-money world of the Buchanans it's like falling off the merry-go-round into a dead-stop lock-step, all actions predetermined and proscribed. Catherine Martin's evocation of the surreal, slough-of-despond ash heap, the hard labor zone of filth and despair between the mansions of Long Island and an enchanted Manhattan, is the nightmare of what lies beneath, the brutal chaos that the unseeing beautiful people race across to keep from falling in.  Except they do.

But before they do, fatally, we get to The Great Gatsby's heart, to the deep, obsessive longing at the center of the mass-manufactured pretense, and here Luhrman slows down the pace, and allows the essential points to be made.

To be sure, there's no shortage of idiosyncrasies in Luhrmann's vision, in which Fitzgerald's distinctively American world seems populated largely with Australians, and a gangster named Meyer Wolfsheim is played by the great Indian film star Amitabh Bachchan.

Thinking of Luhrmann and his over-the-top Gatsby, I can't help but think of Oscar Levant's famous remark, “There's a fine line between genius and insanity.  I have erased this line.”

You may love it, you may hate it, but I think The Great Gatsby is something you don't want to miss. Make sure you see it in 3-D. 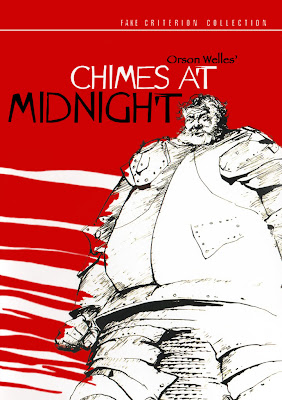 This Sunday, May 12th, you can encounter filmmaking of an entirely different dimension.  Chimes of Midnight is one of Orson Welles' lesser known works, but an enthralling masterpiece.  Like Luhrman, Welles - was he the real life Gatsby? -  loved pushing the envelope with high-tech flourishes, but the tenuous budget of Chimes left little room for them, and as a result the film speaks directly to the heart, with an improvisatory freshness.  It's a film of epic reach and touching intimacy, and if you head out to the Music Box for Sunday's 11:30 a.m. showing, you won't regret it.

I loved the atmosphere and the architectural background behind this movie, evrything was perfectly organized! I wrote a post about it if you want to see