Travesty or Head Trip? Eifman Ballet's Rodin at the Auditorium just through Sunday - and the Chicago connection to Camille Claudel

What Great Gatsby director Baz Luhrmann is to film, Boris Eifman is to ballet.  Which is to say, over-the-top, and then some.  To state many critics despise Eifman's work would be an understatement. “Mr. Eifman flaunts all the worst clichés of psycho-sexo-bio-dance-drama with casual pride while he rushes headlong to commit a whole new set of artistic felonies,” sniffed New York Times critic Alastair Macaulay.  And then he got nasty.  Macaulay was writing about  Rodin, the Eifman Ballet of St. Petersburg production that's playing at the Auditorium just tonight (Saturday) and tomorrow (Sunday) afternoon.  Since I have no taste - I liked Luhrmann's Great Gatsby as well - I recommend it.
It's a bit of a bait-and-switch.  Although the title is Rodin, the key subject is actually sculptress Camille Claudel, Rodin's lover and collaborator, who spent the last several decades of her life

institutionalized for mental illness.   Against a greatest-hits assortment of snippets (recorded) of nearly two dozen works by Ravel, Debussy, Massenet and Satie, Eifman charts Claudel's anguished art-making and descent into madness as part of a triangle including herself, Rodin, and Rodin's wife Rose.

The set is centered by an angled geometric construction that repositions into various configurations, within a wall of light in various saturated colors, sometimes with smoke.  The scenes shift in time from the institutionalized Claudel back to her life as an artist and relationship with Rodin.  The music is often deployed ironally, as in the ecstatic final dance of Daphnis et Chloe used to depict Claudel's nightmare state.  There's also a Can-Can, and a scene that ends with two rustic women standing in a vat of grapes that puts you in mind of a I Love Lucy sketch.
Eifman has his defenders, with L.A. Times critic Lewis Segal describing his work - and Rodin in particular - as “virtually the only one totally in touch with the 21st century.”  And he means that in a good way.  Eifman's dancers are dedicated and accomplished.  And so if you, as a true balletomane, are bored or outraged by Rodin, I apologize, but I found Eifman's work not only swiftly entertaining, but at key moments, deeply moving.  You can think of art as an ethereal temple or a writhing animal outcry, but it only has meaning if you have both.  Snails and oysters.

There's actually a great Camille Caudel website (in French) where you can check out her often very powerful work, including the her bust of Rodin you see to the right.   “There is always something missing that bothers me,” she wrote in a letter to the artist.  Another interesting Claudel website can be found here.

There's a Chicago connection to Caudel, which we wrote about in 2010.  When sculptor Leon Hermant's  Louis Pasteur Monument, then located next to the Field Museum, was dedicated in 1928, the ceremony was attended by France's ambassador to the U.S.  That man was Paul Claudel, who fifteen years earlier had his sister Camille committed to the Montdevergues Asylum with a diagnosis of schizophrenia, only days after the death of their father, who had supported Camille and her work.  Despite persistent entreaties from the asylum's doctors that there was no justification in keeping her there, Paul Claudel abandoned Camille kept her imprisoned there for 30 years.  It was where she died, age 78, in 1943.  The family never claimed the body.

Read: The Pasteur Monument, or, Who do Dead Scientists always seem to get the Hot Babes? 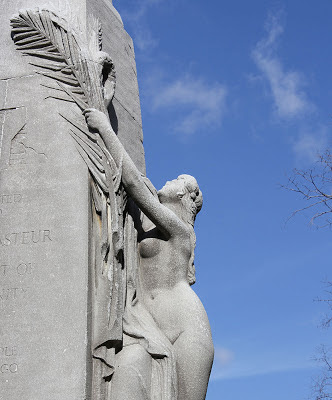