The Cranes are Flying - Right into Your Building 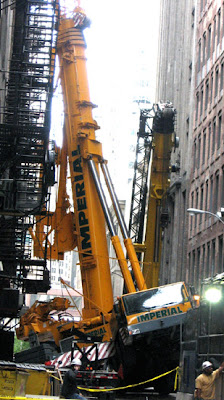 Actually just one crane, but when its a 60 foot plus high yellow behemoth, it's enough to throw Wabash avenue and four CTA rail lines into chaos.

The multi-ton crane was erected to lift air conditioning equipment to a roof of 6 North Michigan, in a mid-block alley that retains the name of Garland Court, a former three block long street that has devolved into a service route and dumpster haven.

A loud boom resounded throughout the east Loop as the alley - sorry, street - cracked under the weight of the crane, upending the cab and leaning the crane into the back of a Jeweler's Row building facing Wabash, sending a hail of bricks and debris crashing to the pavement, crushing a loading dock and possibly damaging the foundation.

Buildings along the block were hurriedly evacuated, and service along the Loop 'L', already overtaxed by the addition of Red Line trains diverted from the State Street subway, was shut down along its Wabash and Lake Street legs, with Brown Line service terminated at the Merchandise Mart.

As of 10:00 P.M., officials were still struggling to remove the crane without causing more damage, planning to ease the crane - gently, it's hoped - on its side, down the length of Garland Court, to allow for dismantling into non-threatening pieces. How do you do this? Bring in more cranes. New crane number one couldn't quite hack it. They're currently on their second. By now, everyone concerned must now be wishing they could have brought in a copter to do the aborted heavy lifting.

[Sunday, May 20] - more news from a story by the Sun-Times Dave Newbart:
1. The crane weighs 160,000 pounds
2. Garland Court is empty underneath. The crane company says they were never told this when they got their permit.
3. The crane is still there.