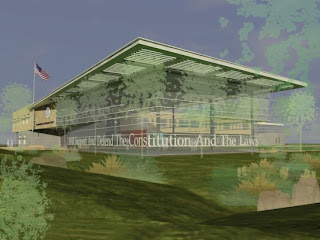 and Immigration Services building in Irving, outside Dallas, for the Department of Homeland Security, designed by Chicago's 4240 Architecture. We'll overlook the symbolism of the using “hundreds of golden plastic spoons” as a “perfect metaphor for a government run by the people”, to talk about the 50,000 square foot structure's most distinctive feature.

Designed to be welcoming to immigrants, the project combines, in the words of lead designer Robert Benson, “the stature of a United States Government building” while also remaining, “approachable and not imposing to immigrants seeking assistance and citizenship status.” Wrapped around the glass-enclosed ceremony room where new citizens will take their oath of allegiance is a key sentence from that oath, “I Will Support And Defend the Constitution and Laws of the United States." in four-foot-high letters, large enough

to be read from nearby Highway 114. Each of the letters is actually a cutout of the full U.S. Constitution. When the sun is at the appropriate angle, the words will be projected onto the floor of the Ceremony Room.

The building, scheduled to be completed early next year, is going for silver LEED status, and the concepts behind the design of the ceremony room are said to be planned for inclusion in other future facilities.