The venerable architect Henry N. Cobb was featured in a Tuesday press release announcing his latest design, 700 West Broadway in San Diego. A not unhandsome structure, a cut well above the city's norm, but, unfortunately, it couldn't be left there.

According to the release, Cobb says he drew the inspiration for his 34-story tower from John Wellborn Root's 1891 masterpiece, the Monadnock Building, on which he speaks eloquently in a video featured on the project's impressively designed, if annoyingly scored, website. But what exactly ties these two together? Let's see: 700 West Broadway - squarish, glass and travertine, shallow blocky setbacks. The Monadnock - plain brick bearing walls, simple yet seamlessly plastic concave profile. Oh, wait - here's the link: that cute retro hat slapped onto 700 West Broadway's roofline like a bad toupee. 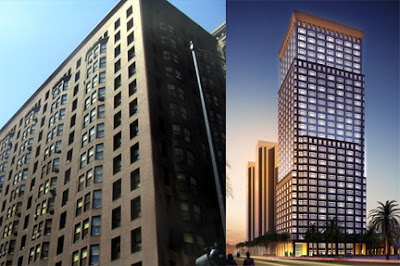 I can't help but be reminded of the pairing between another work of art and its supposed inspiration: 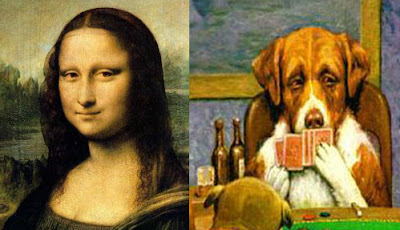 Now now...he said it provided "inspiration," which in artistic circles, is to use as much or as little of an original idea. I like the San Diego building’s subtle setbacks, massing and the ornamentation at the top. It does not veer into postmodern territory like some 1985 edifice.

At any rate, unless my eyes deceive me, one of the nicest things about the project is that the office building does not sit on an above 6-floor parking garage like every new building in Chicago.