Chicago Tribune reporter Susan Disenhouse had a report in last Friday's Chicago Tribune quoting Frank Gehry's dismay at seeing the 1956 Inland Steel Building, one of the Chicago's most essential landmarks, being put on the block less than two years after he joined a group of investors to buy the 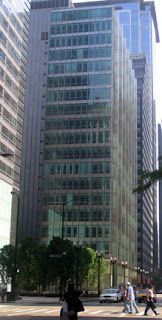 building in August of 2005. Gehry's name was used extensively in both the acquisition and subsequent marketing of the building. The investors, who paid about $44.5 million, are now expected to fetch anywhere from $55 to $65 million from the flip.

Gehry told Diesenhouse that "the only reason it was sold to someone like me was to preserve it." However, Diesenhouse also reveals that Gehry apparently didn't put any of his own money into the acquisition, and stands to earn up a quarter million dollars from the sale. "It upsets me that these guys are taking the easy way out," she quotes Gehry as protesting. "To just dump it on the market isn't responsible."

Yet veteran Chicago real estate investor Harvey Camins and his partners are far from alone in finding the current market too tempting to pass up. As reported by Crain's Chicago Business, there's now a boom market in landmark office buildings. The partnership that lovingly restored John Wellborn Root's 1891 Monadnock Building - the dazzling masterpiece that combines skyscraper height with daringly plastic, load bearing walls - and held on to it for twenty-eight years, has now put that structure on the market with an anticipated sale price of between $45 to $60 million. 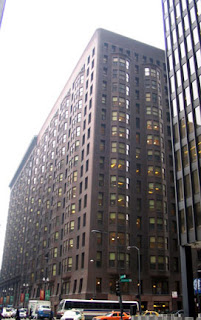 Root's other Loop masterpiece, the 1888 Rookery Building on LaSalle is, according to Crain's, in the process of being sold for $73 million.

Putting aside the irony of Gehry bitching about a deal in which he stands to make a cool quarter million without investing a dime of his own, his concerns about the future of the building are probably misplaced. Inland Steel is an official city landmark, and while the value of that protection is currently undergoing a radical devaluation, the Inland stands to endure due both to its method of construction and surrounding geography. While its small site would seem to make it a prime candidate for agglomeration into a larger megasite, its neighbors are structures that aren't going anywhere. To the east, there's the just-restored Majestic Theatre building. To the north is a plaza built for the newly-minted skyscraper, One South Dearborn, that also puts the Inland on display as an added bonus. And although Chicago is being hit by a contagion of facadectomies where everything but the facade of a landmark is allowed to be destroyed, at the Inland, with no interior columns, the exterior facade is its structure.

It’s hard to find knowledgeable people regarding.but you sound like you know what you’re talking about! Thanks for sharing this with others.