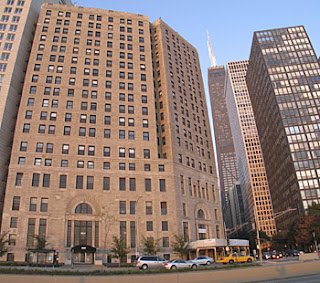 organizing a Sunday, June 3rd rally set for 1:00 P.M. in front of the 1927 Beaux Arts Lake Shore Athletic Club, 850 North Lake Shore Drive at Chestnut, to support saving the building it describes as a "Georgian Jewel" from Fifield Realty's plans to demolish the structure to make way for a Lucien Lagrange highrise. The building had been used as a residence hall by Northwestern University until they closed it down in 2005 and sold out to Fifield, who filed for a demolition permit on April 15th. As a property listed as "Orange" in the Chicago Historical

Resources Survey, indicating it is "potentially significant", the permit is on a 90-day hold while the city decides whether the building merits saving. Designed by architect Jarvis Hunt, the structure's features include a muraled, 35-by-75-foot indoor swimming pool, a two-story high foyer, carved marble fireplace and a three-story high Great Hall.

In addition to Preservation Chicago, other groups working to save the Club include the Streeterville Organization of Active Residents (SOAR), and Landmarks Illinois, which named the structure to its 2007 Ten Most Endangered List.

For Sunday's rally, Preservation Chicago promises "a torch-bearing runner, athletically-clad protesters will be out in full force, highlighting the Lake Shore Athletic Club as not only a stunning example of Chicago’s architectural might, but a site where many Olympic swimmers have trained, and where the U.S. Olympic trials for swimming were held in 1928." The organization is urging participants to come dressed in their own athletic gear to carry forward the theme.

Key to the effort is gaining the support of newly elected 42nd Ward alderman Brendan Reilly, 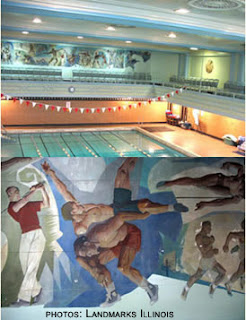 who defeated 35 year-incumbent Burton Natarus on a platform predicated on a more balanced approach to development. (brendan@reillyforchicago.com, 312/642.4242; fax: 312/277.1009) In Chicago, where alderman usually wield veto power over projects in their wards, the positions Reilly takes on issues like the Lake Shore Athletic Club and a proposal to build a new Chicago Children's Museum on what is largely open land in Grant Park are seen as key indicators as to whether his election will mark substantive change or a continuation of predecessor Natarus's long-time coziness to developers who were major contributors to his campaigns.