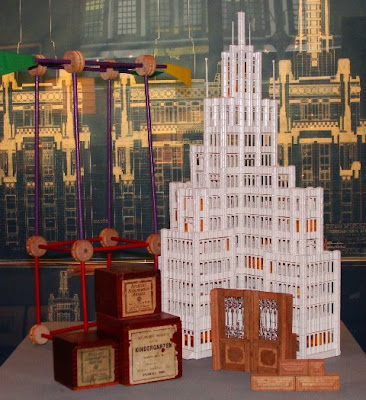 I've already fessed up to my own obsession with construction toys, and through December 27th you can relive your own at David Jameson's ArchiTech Gallery, which is marking its tenth anniversary with the exhibition, Architectural Toys, drawing on items from the late 19th and early 20th century. 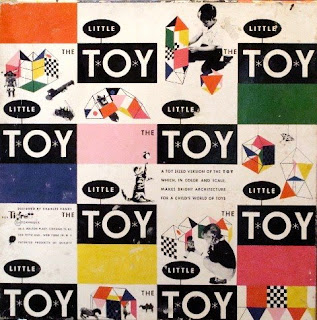 were left in their tombs for the afterlife. American and European toys of the 19th Century were made in wood and cast stone, anticipating years of rough play by legions of youthful architects.

Included are the Froebel Blocks beloved of Frank Lloyd Wright, Tinkertoys, Lincoln Logs, and the modernist white-city American Skyline set, which I also played with as a kid. Pride of place goes to an Erector Set Ferris Wheel, replicating the most popular attraction of the 1893 World's Columbian Exposition. There was also a 1950's building kit designed by Charles Eames, and a "Fort Dearborn" Lincoln Log set, which proved vastly more popular than the "Prairie Avenue Massacre" building set issued by Kenner shortly thereafter.

The ArchiTech Gallery is at 720 North Franklin Street, Suite 200, and is open Thursday, Friday and Saturday noon to five P.M., "or by chance or appointment." There's only three more weeks to catch it.