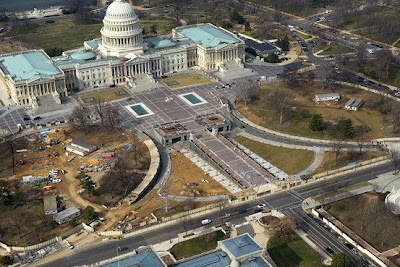 Should bureaucrats and architects be forced to watch Downfall (Der Untergang), director Oliver Hirschbiegel's harrowing film of Hitler's last days as a burrowing mole beneath the Berlin of the collapsing Third Reich?

One can't follow the contemptuous early reviews of the new underground Capitol Visitor Center, which has just opened after ten years $621 million, in such ideologically diverse newspapers as the Washington Post and Wall Street Journal, without feeling chills down the spine that the spirit of Albert Speer is alive and well, not just in the nation's capital, but in the American presence both domestic and foreign. (Thanks to Blair Kamin's Skyline blog for the heads-up)

Where visitors had, since its creation centuries before, approached the temple of democracy across broad, generously landscaped lawns whose trees established a natural, human scale, they now must scuttle beneath a massive, overpaved plaza, only to find themselves in an overscaled "Emancipation Hall" that evokes, not Democracy, but Speer's Berlin or Mussolini's Rome

It all began with the 1998 shooting of two Capitol policeman, and security concerns that escalated with 9/11. Couple those fears to the power of bureaucrats controlling the purse strings and the emptiest, most banal emotions of imperial self-importance, and you get a rancid, toxic stew that creates things like the new Capitol Visitors Center, a joyless funhouse mirror offering a perverted nightmare reflection of the true spirit of American democracy.

During an even more troubled time, World War II, the city of London suffered incredible destruction during the Blitz. The spirit of its citizens became immortal in how they survived, endured and triumphed.

In early 21st America, the bombs have yet to fall, the earth has yet to be despoiled, yet, increasingly, we are allowing ourselves to be herded into the underground shelters on false promises of a perfect security. We place our hopes not on our character but on the fig leaf of the bunker. A bunker under the capitol. Bunkers for our embassies. Bunkers at our public buildings. An above-ground bunker at Ground Zero. As Carol Ross Barney proved at Oklahoma City, it doesn't have to be this way.

When Rem Koolhaas labeled Daniel Libeskind's proposals for ground zero “a massive representation of hurt that projects only the overbearing self-pity of the powerful," I found his remarks pompous, condescending and false. Now, with the designs like the new Capitol Visitors Center, I'm no longer so sure.

"They who can give up essential liberty to obtain a little temporary safety, deserve neither liberty nor safety." - Benjamin Franklin

And now bunkers for our children: The Chicago Children's Museum!