Lunatics we Love - Prince-Ramus Lost in the Esquire Funhouse

It begins with the image of Vitruvius "wherein he fellates his client--some emperor named Caesar" and goes downhill from there. 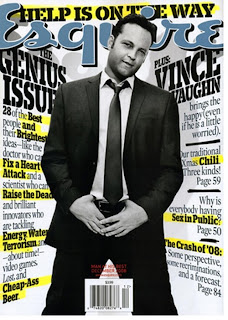 If you thought my stuff is bad, you've yet to encounter what may be the worst writing on architecture you ever encounter, Scott Raab's The Young Savior of American Architecture Burying Frank Gehry.

The subject of Raab's portrait, Joshua Prince-Ramus of the firm REX, is portrayed as having an ego that's even more bloated than Vince Vaughan after Thanksgiving dinner. Read all about it, and see the pictures, including Prince Ramus's spectacular Museum Plaza in Louisville, here.

It's too bad that Museum Plaza will likely never see the light of day due to this financial crisis. I love that building.

I think that for all his modest demeanor the reality of the high-minded approach is that it is not feasible. Blame it on credit crisis' or being ahead of his time, but he can't keep the office floating, even with cheap labor.

Prince-Ramus was not an original founding partner in OMA, as the article incorrectly states