He may never realize his dream of being President, but disgraced Illinois Governor Rod Blagojevich's viral 15 minutes of (in)fame(y) - which includes John McCain on Letterman tonight poking fun by peppering the word "bleepin'" into his opening remarks - has gone global, popping up in Milan in a post on the indispensable Opera Chic block quoting the Baltimore Sun's Tim Smith on a lawsuit filed by 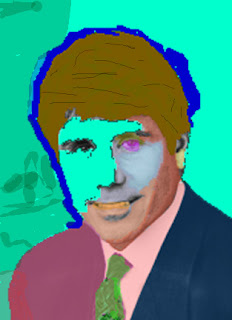 Don Rosenberg, the long-time Cleveland Press music critic who found himself muscled to the sidelines by a set of connected bluebloods taking offense at Rosenberg's tough but honest critiques of the capabilities of music director Franz Welser-Most. Smith writes:

Welser-Most also was quoted as favoring a system of charging money to get an audience with him (it sounds rather like something that Illinois Gov. Blagojevich might have thought up) -- more than $5,000 before the donor would get a handshake, but, for $10 million, "of course, you go to dinner."

Is it only a matter of time until the phrase . . .

to Blago v: to trash talk about putting the screws to an associate in pursuit of personal gain, often with unrealistic expectations arising out of a hallucinatory sense of self-importance