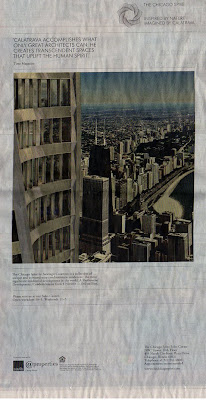 It had already been dubbed the Drillbit or the Big Screw, but in October Crain's Chicago Business added a new nickname for the Santiago Calatrava designed Chicago Spire: the Lien-ing Tower of Chicago. Construction work stopped just as architect Calatrava filed an $11.3 lien against the project for unpaid services. Co-architects Perkins + Will filed for another $4.8 million. Contractors filed for millions more, and finally it came to developer Garrett Kelleher suing himself, with one division, Chicago Spire LLC and Shelbourne Lakeshore Ltd. filing a $17.5 million lien against a different division, Shelbourne North Water Street L.P. 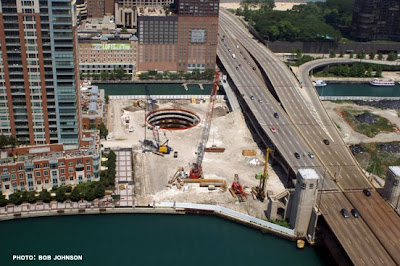 All that's left, beyond a shoeshine and a smile, is a 76 foot deep, 110 foot across hole where a 2,000 foot high building should be rising. Kelleher, however, appears to be clinging to his Gatsby-like optimism, running the full-page ad shown here in this past Sunday's Chicago Tribune. According a report by Blair Kamin, a Shelbourne spokesman says Kelleher is merely "waiting for the banks to start acting like banks again." Whether he's talking about the banks so careless in their lending that they brought down the nation's economy, or the banks so afraid of lending that they're keeping it there, remains unclear.
(Click on time for permalink) 9:36 PM