Trump and Aqua at Large and in Detail 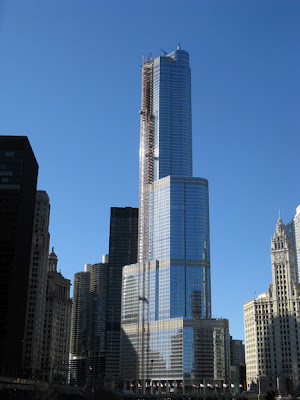 As one of the greatest building booms in Chicago's history draws to a close, the two most distinctive additions of the city's skyline emerge.

Trump International Hotel and Towers has dramatically changed the scale of Chicago's riverfront and the Magnificent Mile. At 1362 feet, the Adrian Smith/Skidmore, Owings and Merrill design is the tallest building constructed in Chicago in over 34 years, and is now the city's second tallest ever, after the Sears Tower at 1451. You can see some spectacular photographs taken from the top of the tower, taken by crane operator Ken Derry, here. (Thanks to Isaac Gaetz for tipping us off to these.)

The Trump dominates the vistas all around it. 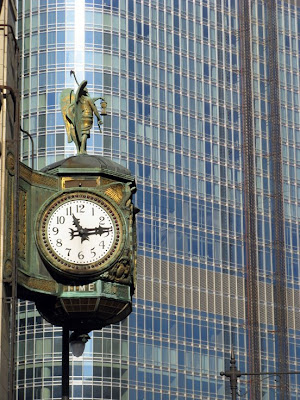 While most of the design is about big, there are some more human scaled grace notes, such as this perfectly proportioned garden separating the entry ramp for the garage spiral from the walkway leading to the Wrigley Building Plaza and Michigan Avenue. 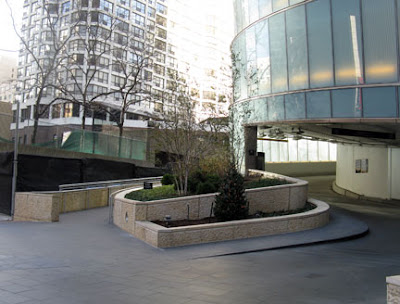 Where the Trump commands attention through its sheer size, Studio/Gang's Aqua, while no shrinking violet at 82 stories and 822 feet, dominates through it's distinctive appearance. As it nears completion, this may be the best time to see it, when it exists as pure form, before the addition of balcony railings whose presence is currently exaggerated by being wrapped in big plastic baggies. 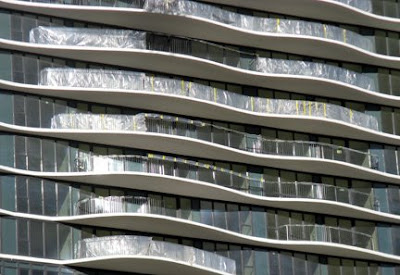 Although the condo component of Aqua has essentially sold out, the project is currently dealing with the pullout of Strategic Hotels from its commitment to construct a 225 room annex to the adjacent Fairmont in 15 of Aqua's floor. It's almost too bad we're in the era of digital photography, because developer Magellan might have compensated for the loss by getting indicted Illinois governor Rod Blagojevich to shake down Kodak for a cut of all the film sales engendered by a building that will undoubtedly become, after Da Bean and the Water Tower, one of the most photographed attractions in Chicago. 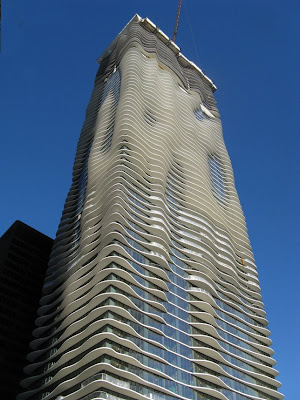 "The design of Adrian Smith and Skidmore, Owings and Merrill, it's the tallest building constructed in Chicago over 34 years, and is now the city's second tallest ever, after the Sears Tower at 1451."

Lynn, it would help readers if you gave Trump Tower's full height and included a measurement standard after "1451". Just standard journalism practices...

Corrected. A reference to the Trump's height in feet somehow got deleted from the original post. "Standard journalism practices" also include an editor to catch all the writer's mistakes, a role that for my blog, you, dear readers, have unfortunately been pressed into service. Thanks for coming through.

Thanks for the shout out Lynn, just a little comment though, my name is spelled Isaac, not Issac. Thanks!