CAF's 2012 Patrons of the Year: a Kitchen (Inspirational), a Rush (and Bill Kurtis's hips), a Tower (melange included), and the "Blood and Guts" of the City

Rush didn't set out to create an architectural icon here in the city.  Hopefully that's what it will become , but it's not what we set out to do. We set out to administer the best health care for our patients.

That was Mike Lamont, the AVP of Capital Projects, talking about the new Rush University Medical Center, picture above.  Rush and their architects, Perkins+Will, were among six projects honored at the Chicago Architecture Foundation's 2012 Patron of the Year awards luncheon at the Palmer House on Wednesday.

"Having had two hips replaced at Rush Presbyterian, I helped pay for it.  Money well spent," joked newsman Bill Kurtis, MC for the event. [You can see some of our photos of Rush here.] 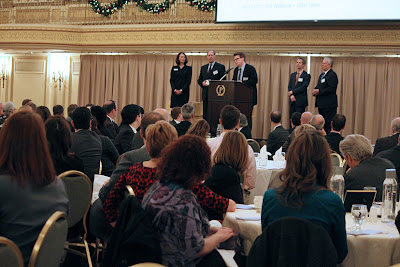 While architectural awards usually go to the designers, these awards, as the name implies, go to the people who create the commissions and pay the bills.   ("Was the Mann Center named after the Mann who writes the novels, Mr. Ormandy?" "No, madam, it was named after the Mann who writes the checks.")
"Good architecture requires more than a good architect," said Steven Stein,  Senior Partner of event host Stein Ray LLP. "It requires a great client - a risk-taker." 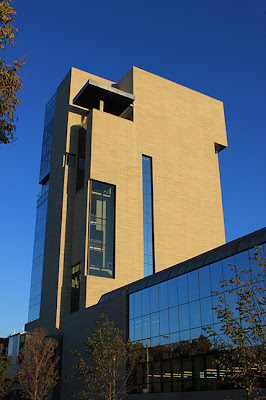 How the client/architect relationship can create superior buildings was a central topic of the acceptance speeches, including one from Tod Williams and Billie Tsien, the architects of another winner, the University of Chicago's new Reva and David Logan Center for the Arts . . .


Good buildings can only happen when there is a good client.  Great buildings can only happen when the client has vision and a commitment that exceeds beyond reasonableness.  We thank the University of Chicago, who along with the family of David and Reva Logan were unreasonable in their belief that a building could change the lives of students and those in their community  . . .

"The architecture is really about the journey of discovery," added University Architect Steven Weisenthal, "which is in many ways what the melange of materials, volumes, spaces, vistas is - you never know what you're going to find next." 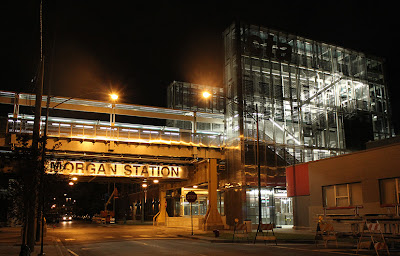 "There is a saying," said Carol Ross Barney, architect of the third winner, the new Morgan Street CTA Station,  "that I would like to debunk totally here today .  The saying that 'it's good enough for government.'  Because I'm going to tell you how gratifying it is to work with CDOT, work with the people at the City of Chicago .  They're devoted; they're dedicated .  This - it's not even a building -  it's infrastructure; it's the blood and guts of our city." Added Chicago Department of Transportation Commissioner Gabe Klein, "We have a small but very experienced team and they work very hard and I think more important they work really smart."  He cited the role of the station in supporting the accelerating revitalization of its Fulton Market neighborhood. [You can see our photo review of the Morgan Street Station here.]

Shannon Stewart, CEO of Inspiration Corporation, thanked Larry Kearns of Wheeler Kearns Architects for the success of the fourth winner, the Inspiration Kitchens in Garfield Park, supporting a mission of  "helping people who are homeless or low income getting culinary skills and then moving to the food industry and in addition to that, it also is a place that we provide free meals to people who are working but who are still struggling to make the ends meet.  Larry Kearns and Chris Spencer. . . are awesome architects. and they made it easy for us to be good patrons because they really led us to great choices and making a beautiful building."
There were also two honorable mention awards,  for the Black Ensemble Theater from Morris Architects Planners. . .
. . . and the   Instituto Health Sciences Career Academy from JGMA and Ghafari.
The awards were determined by a blue-ribbon jury chaired by Stanley Tigerman and including Joseph Burns, Roberta Feldman, Reed Kreloff, Mike McCaskey, Cathleen McGuigan, Steve Stein and John Ronan.

Even the 19 nominees that did not win awards - from the new City Target on State, the Roosevelt University Tower. Burberry on Michigan, the Museum of Broadcast Communications, and the Old Town School of Folk Music -  would seem to prove that enlightened patronage, the kind that actually enriches and extends the glory of Chicago Architecture, is far from impossible.  If only the builders of all those deadening residential towers could take the hint.