The bicycle:  the future - or the yuppies revenge?

On Friday, Chicago Mayor Rahm Emanuel and Department of Transportation Commissioner Gabe Klein dedicated the city's most ambitious commitment yet to the ideal of taking biking beyond the recreational to make it an integral part of Chicago's transportation system.  On the west side of Dearborn, from Polk Street all the way north to Kinzie, there is now the city's first two-way, protected bike route, complete with dedicated bicycle signals.  At the Printers Row Park event, Klein also officially released the Chicago Streets for Cycling Plan 2020, an ambitious document that sets a goal of a 645-mile network that puts protected bikeways within half a mile of every Chicago resident.

It was a Back to the Future moment, as Chicago rose the crest of the first major bike boom back in the 1890's, when the introduction of the affordable safety bicycle set sales soaring.

It also created a new industry, with Chicago at its center.  No fewer than 38 bicycle manufacturers made Chicago their home.  In one estimate, two out of every three bicycles built in America came from plants located within 150 miles of Chicago's city center.  Manufacturers from throughout the world exhibited "bicycles, tricycles and appurtenances" at the 1893 World's Columbia Exposition, where you could also see the "Hotchkiss Bicycle Railroad", which was essentially bicycles mounted on an extended wooden fence.
Of course, it was not the bicycle railroad, but the highway that would come to dominate American transportation, as the rise of the automobile soon relegated the bike to a children's toy.  The great bike boom of 1890's created a surplus of product that sent Chicago's bike manufacturers reeling toward bankruptcy.  Today, 86% of the bicycles sold in America are manufactured in China.

Somewhere around the great 1973 oil embargo, however, adults began to rediscover the bike, reclaiming the pathways from their kids.  According to one survey, over a quarter of all Americans sixteen or older ride a bike sometime in the year  Over 130,000,000 bikes are manufactured annually worldwide,  most of them for adult riders.

The number of people using bikes to commute to work remains small.  Portland, Oregon, at just under 6%, remains the champ.  New York City is at .6%, and most cities, including Chicago, hover somewhere around the 1% mark.
The Emanuel administration wants to change that, and is intent on taking biking beyond the boutique.  “People are going to ride their bikes to work,” said Emanuel on Friday, “It's going to happen.  Now we've got to do it in a way that insures protection for both the bicyclist and the driver.”
Emanuel posits a clear connection between bikeability and economic growth:


Two facts in the last year:  coincidence?  I think not.  One, the City of Chicago moved from tenth to fifth of most bike-friendly cities in the country in one year.  No other city has ever moved that far that fast. In the same year, the city of Chicago moved from fifteen to tenth worldwide in startup economy.  No other city has moved that far, that fast. And you cannot be for a start-up, high-tech economy and not be pro-bike.  And you can't be pro-bike without having a vision of having a start-up economy."

In addition to Dearborn Street, 2012 saw the completion of a spoke route on Wabash, and crosstown routes on 18th, Jackson and Kinzie.  The goal is to have 100 miles of protected bike lanes by 2015, and over 500 new miles by 2012.   Through 2015, $32 million of the funding comes through the federal Congestion Mitigation and Air Quality (CMAQ) Improvement Program, with a $8 million local match.  The city is still trying to figure out a dedicated funding source for ongoing maintenance. 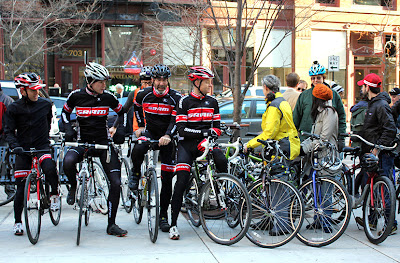 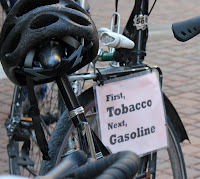 Despite the economic potential Emanuel sees in biking, the intrusion of an increasing number of bicycle riders into our car-clogged streets has often taken on the pitched-battle profile that recalls the animosity between farmers and ranchers in the Old West.

The Trib's John Kass, as part of his ongoing battle against the 21st Century, rails against "elitist politically coddled bicyclists" by indulging his usual habit of seeing everything in Chicago he doesn't like as a Rahm Emanuel plot,  raising spectres of traffic tickets and tolls for bikers.  But even a dedicated bicyclist like Crain's Chicago Business's Greg Hinz, citing over 1,400 Chicago bicycle injuries  each year, with 39 fatalities since 2005, expresses his doubts over the city's bike plan: "I just don't know if it it's possible."  Part of the plan is to make streets safer by deliberately slowing down motor traffic.  How will drivers take to that? 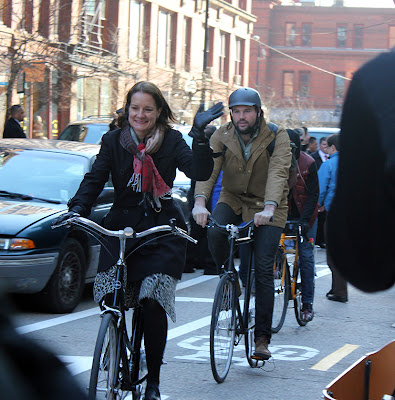 There's no doubt that bike lanes confound our unthinking expectations in navigating streets, almost as if we suddenly decided to adopt the British method of driving on the left.   What we expect is sidewalk/parking/southbound lanes/northbound lanes/parking/sidewalk.  On Dearborn Street, what we see is the southbound parking actually thrust into the street, replacing a traffic lane.    A two-way, "barrier protected" bike lane, north and southbound, takes up what was previously the parking lane. 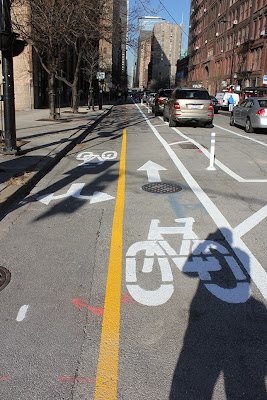 The "barrier" consists of spike-like bollards placed at wide intervals along the inward perimeter of the route. The markings painted on the sidewalk become an essential iconography in defining the bike lanes and their relationship to the rest of the street.  Green-painted "Two-stage turn boxes" provide bikers a waiting space for making two-stage turns. 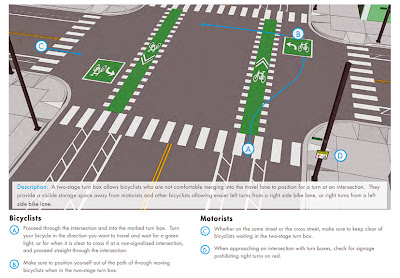 There are mixing zones, crossing markings galore, and even new traffic signals designed for bicycle crossings . . . 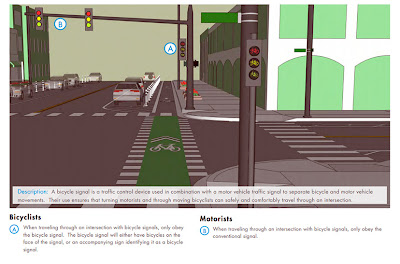 It's like having to learn a new language, relearning how we "read" the city as we move through it.  No doubt about it, it's a bold initiative, and a real gamble.  It not only serves a constituency, but aims to shape behaviour.  If nothing else, the initial disorientation should give us a chance to not just move past the city on our way to somewhere else, but see it afresh as we're reclaiming our bearings.

The parking lane on Dearborn on the west side of the street faces northbound not southbound as stated in the post.

I really enjoyed reading this post, big fan. Keep up the good work andplease tell me when can you publish more articles or where can I read more on the subject? kettingslot