Art Alone Endures: A Night at the Fine Arts Building


Last Friday was the fourth annual A Night at the Fine Arts Building, a holiday event that opens up the ten-story structure to allow visitors to explore both its architecture and its honeycomb of arts-related tenants, from painters, to vocal coaches, piano and violin teachers, architects, digital designers, and more.

The Fine Arts  was originally built in 1885 for the five Studebaker brothers, who transformed a small blacksmith shop in South Bend, Indiana into a maker of cover wagons and, eventually, one of the country's most prominent carriage manufacturers.  The huge windows on the main floor brought light and attention into the elegant showrooms, while the rude work of warehousing and assembly was accomplished in the floors above. 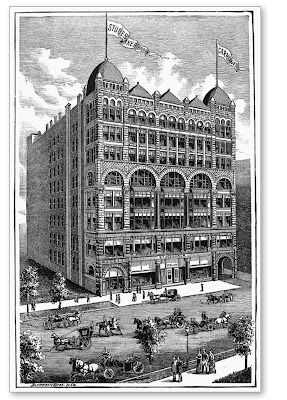 Architect Solon Spencer Beman had assigned the project to his employee Irving K. Pond. In his autobiography, which we wrote about last week,  Pond recalls . . .


The Studebaker warehouse which I designed for Mr. Bemen in 1884-85, while heavy, in a way, as became a warehouse building and a display ground for fine vehicles- this accounting for the great windows- was not Richardsonian in mass or in detail. but had the springy lilt which might be expected from one whose pulse beat in rhythms.  I leaned more to the lighter, airier forms of the Tuscan, then to the heavy stocky forms of the Northern Spanish Romanesque.  The carvings on the Studebaker were an adaptation to granite of the leaf forms and convolutions of the Pullman [building] court stairway, and undoubtedly were the inspiration of much of that type of ornament which was soon to follow.

The rough-boned design was not universally loved.  In an 1891 edition of Harper's Magazine, critic Montgomery Schuyler wrote, “The Studebaker building is one of the show buildings of Chicago, but it cannot be said to deserve this particular praise in so high a degrees as several less celebrated structures.  It partakes--shall we say?--too much of the palatial character of Devonshire Street and Wall Street to be fairly representative of the severity of commercial architecture In Chicago.” 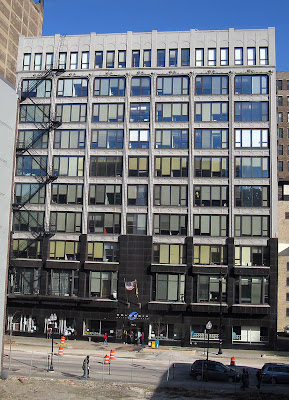 It took not much more than a decade for the Studebakers to outgrow their new space, and in 1896, they commissioned Bemen to design another building for them at 623 South Wabash, across from Adler and Sullivan's Wirt Dexter Building.  The ten-story structure, with it's open glass facade, was later owned by Brunswick, before being acquired by Columbia College in 1983.  The Wirt Dexter was destroyed in a spectacular 2006 fire. 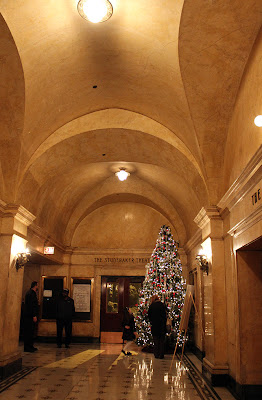 The Studebakers sold their former home on Michigan to the “Corporation of the Fine Arts Building”.  In Pond's account . . .


The Studebaker warehouse was, some years later, to be remodeled, as to its interior, for office, studio and theatre uses, while the exterior was to be robbed of a quality of quaintness and naivete, by the addition of any extra story or two, crowned with a heavy over-hanging corning, in the New Mode, which destroyed an aspirating vertically peculiar to the original design.  This was the first,  and for many years, the only, Chicago building to individualize the bays and unify the composition by sending the piers up through, and capping them above the coping.

The new corporation also purchased the land beneath the building - which the Studebaker's had been leasing -  from three separate owners.  Just two of the properties cost $100,000 to acquire.  Music publisher and developer Charles C. Curtiss redesigned the building as  a kind of artists colony.  The skylit studios on the 10th floor became home to many of the city's leading artists, including Lorado Taft, and the painters of the murals that line the stairway.
You can find a complete inventory of the murals on Jyoti Srivastava's indispensable Chicago Architecture and Cityscape blog here. 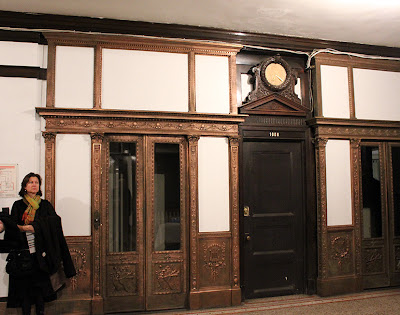 The Fine Arts was also home to literary magazine The Dial and Poetry.  Famed cartoonist John McCutcheon was at one time a tenant.  Frank Lloyd Wright rented studio 1020 in both 1908 and 1911.  Memorist Anna Morgan recalled . . .


In the beginning years of The Fine Arts Building, there was a blending of the social with the artistic life in the studios that was truly delightful.  We were all prosperous, with plenty of work to do, yet somehow there seemed to be time to exchange visits with our co-workers and take an active interest in the work which each was doing . . . It was a show place in the town, a rendezvous where you were sure to see interesting people.  The samovar was in daily service between the hours of four and seven, and for a few years it was almost a continuous party. 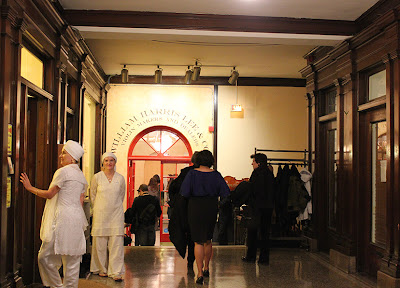 And while at the Lambert Tree Studios, the artists the building was created for have long since been replaced by offices and chic retailers, the Fine Arts remains an active artists enclave.  In 2005, developer Robert Berger bought the 200,000-square-foot building for $10 million.  The Studebaker Theater, where I saw Peter O'Toole, Ralph Richardson and Henry Fonda (in separate productions, unfortunately) remains closed, as does the smaller Playhouse . . . 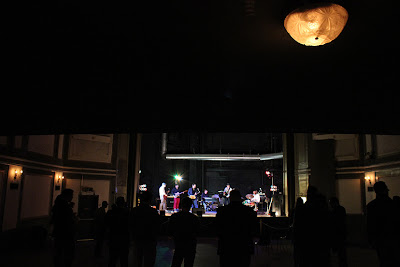 . . . where I was among the small audiences bowled over by Orson Welles' Falstaff many years ago. 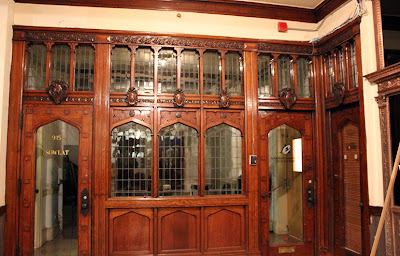 Berger has put money into restoring the building, cleaning up the facade and revealing the subtle pink hues of the stone for perhaps the first time since it was covered in coal dust over a century ago.  And while some of Berger's high-tech visions have remain unrealized, tenants now include digital design and marketing firm Clique, whose offices offer a commanding view of Grant Park. 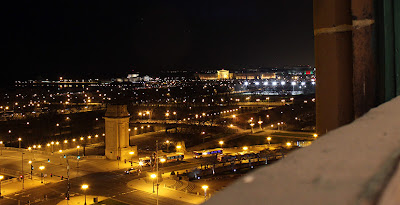 The Fine Arts is a bit of a shaggy dog of a building, down to the much-loved Artists Cafe on the main floor . . . 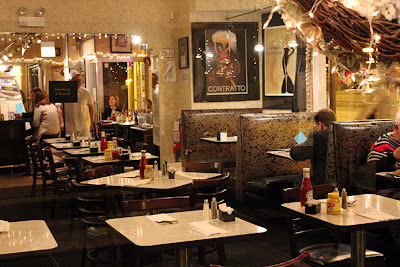 For all of Pond's pride, the exterior is interesting rather than elegant.  Berger, however,  has made good on his promise to keep the roster of tenants arts-focused, preserving what the building website claims to be"The Nation's Oldest Artist Colony."  Walking into the warmth of the womb-like, amber-colored lobby . . . 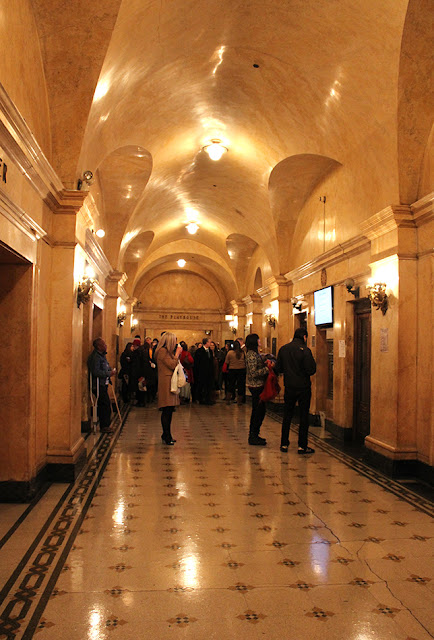 . . . and swooping up the glass-enclosed shafts in one of the manually-operated elevators . . . 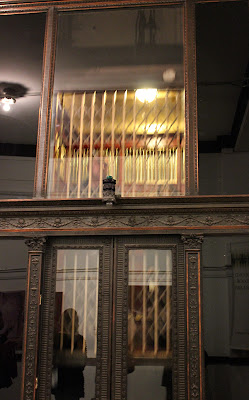 . . . is to enter a world far removed from the generic commerce and architecture of our Supply Chain Age.  Behind the doors of the long corridors . . . 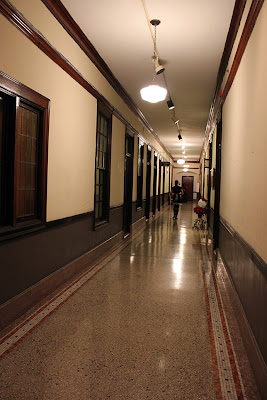 . . . tenants struggle, as always, to make their way through the world, but as they spill out into the hallways and mingle with their guests, Anna Morgan's "continuous party" again takes life. 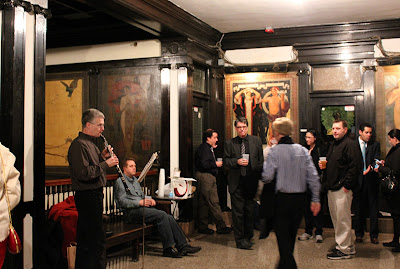 I've always been disappointed the 1896 Studebaker building doesn't get much attention. It's Mies, 50 years early.

This was the first, and for many years the only, Chicago building to individualize the bays and unify the composition by sending the piers up through, and capping them above the coping.