It's really not a building you'd give a second look.  A nondescript apartment block, presentable enough, to be sure, but pretty much what you'd see in any Chicago neighborhood.  When you walk by and it's gone, will you even notice? 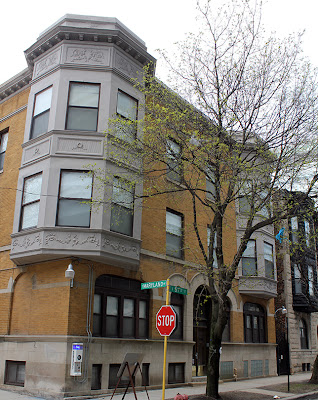 But the six-flat building resting gently at the corner of Maryland and 57th has one great claim to fame.  For less than a year, it was home to a four-year-old Ronald Reagan.  It was here, according to a an eloquent requiem by Mary Clare Kendall in the Examiner, that young Ronnie would watch horse-drawn fire engines race by his window.   In his gas-lit apartment, the small boy dreamed of sportscasting and Hollywood and Pennsylvania Avenue, and of a nearby Theological Institute rededicated to the theology of Milton Friedman.  On warm, summer days, his mother would take him to feed cabbages to the small dinosaurs that still grazed in Washington Park. 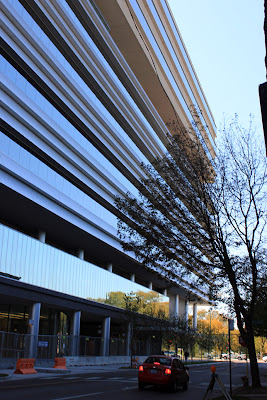 Today, the apartment block sits in the deep shadow of the new, state-of-the-art University of Chicago Center for Care and Discovery, right across the street.  That same kind of hyper-density is planned for the two blocks to the north of the massive battleship of a hospital, including where the Reagan apartments stand.  Kendall writes that it may be gone as early as January 1st.   The Commission on Chicago Landmarks has already determined the building doesn't meet the criteria for designation, and Kendall says Mayor Rahm Emanuel's office hasn't responded to her request for comments.  (Considering how Emanuel not only crafted an elaborate charade to designate Bertrand Goldberg's Prentice Hospital a landmark and rescind that designation only minutes later, but was actually complicit in helping Northwestern develop a campaign to destroy the building, I would advise Kendall not to hold her breath waiting.)

The University of Chicago is both a world-class institution and an urban mega-power.  It goes where it pleases, and strikes where it pleases, and in this it is largely unchallenged by governmental entities, such as the city, which operate in the same Era of the Supply Chain dynamics of relentless consolidation and standardization.  When Rafael Viñoly , architect of the new Center for Care and Discovery, mapped out the eventual filling out of the blocks to the north with the same massive amount of square-footage as in his building, he cited a basic principle that the sign of success when you do something is that you wind up doing more and more of it (and build even bigger buildings). 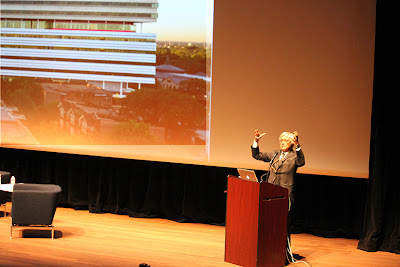 Such is the case in health care, where what was once a distributed network of neighborhood hospitals is being supplanted by a smaller number of far larger, increasingly centralized facilities like the U of C, Rush, Lurie and Northwestern, all of which have recently completed new facilities with price tags of half a billion dollars on up.  You can witness the fallout at Ravenswood Hospital on the northwest side, a community institution with a century of history that, even as it bulked up, found itself unable to compete. 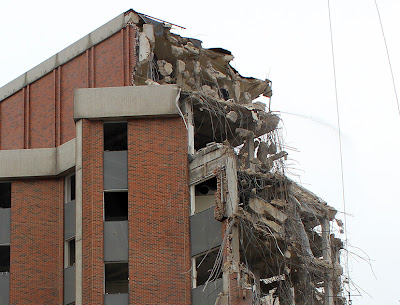 In 1998, the hospital barely retained its Medicare eligibility after a 15-year-old gunshot victim who collapsed only 35 feet from the hospital's entrance died after being refused care.  That same year, Ravenswood was acquired by Advocate Health Care, which merged the facility with Illinois Masonic, cut jobs, downgraded the status of the emergency room, and eliminated in-patient services.  It didn't help. Ravenswood's healthier competitors hired consultants to poach its doctors,  and Advocate closed the hospital in 2002. The brain surgeons (this is not a metaphor) who took it over and made it a  Neurologic and Orthopedic Hospital departed for better climes in 2009, and Ravenswood was euthanized for good.  A 2005 proposal to convert the hospital to condos went nowhere.The once modern showcase of a building remained boarded-up and empty.  This past July, a 16-year-old boy broke in and fell two stories to his death. 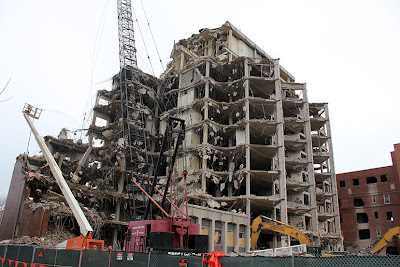 Now the main hospital, the Adler Building, a rock-solid structure not much more than 40 years old, is being demolished for a handsome new $33 million Lycée Français School designed by Krueck and Sexton.  May it live to least half a century.
This is an example of outlying districts actually de-densifying - it takes a lot less construction to serve hundreds of students than 300 hospital beds.  At the cores, however it's a different story.  Density is good, say the urbanologists, so it follows that more must always be better - right?  In the case of the University of Chicago, this means an enormously rich and powerful institution spilling over into the residential districts on its borders and remaking them in its own super-scaled image.  So long, Ronnie's apartment - at the end, your bulked-up neighbors made you look like a discarded toy.  Hello - eventually - to Center for Care North.  Relentless big, bearing down, block after block.

On the peripheries of the University campus, the juxtapositions are almost surreal . . . 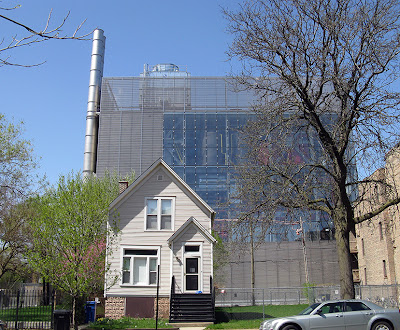 The old stone-clad houses on Maryland Avenue, reflected in Helmut Jahn's spectacular West Campus Combined Utility Plant, are like ghosts who have yet to realize they're dead. 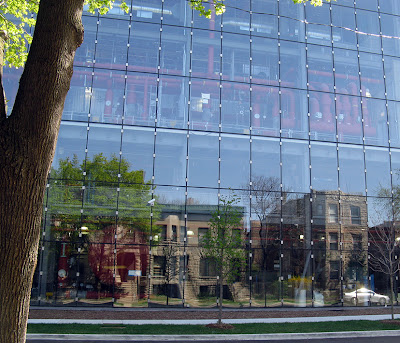 I feel like it's a waste of architectural artifact. But if the demolition leads to a good future use, let the change be.