Out from the Sidelines: The Autobiography (and Confessions) of Irving K. Pond


“I.K”, [Frank Lloyd Wright] said with almost no prelude. “I.K, I have been conventional too long!  I am a genius, I know no conventions, a genius knows no law.  A genius must and will live his own life.  From today I cast aside conventions; from today I live my own life!”  That was the gist of a ten or fifteen minute prattle, in which the words 'genius', 'life', 'conventions' were flung about like confetti at a carnival. At first, I thought that as usual architecture was on his mind . . . but the next day the papers carried as an item of news that our genius had 'eloped with the wife of a client.'
- from  The Autobiography of Irving K. Pond: The Sons of Mary and Elihu 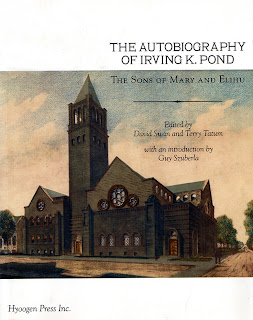 Reading the history of the Chicago School of architecture through the eyes of Irving K. Pond is like experiencing Hamlet through Rosencrantz and Guildenstern.  The expected players - Frank Lloyd Wright, Louis Sullivan, Daniel Burnham, etc. - are all there, but the glow of inevitable historical triumph has been stripped from their beings, leaving them looking as grasping, pretentious and duplicitous as the far less immortal souls with which they shaped their era.  If history is written by the winners, The Autobiography of Irving K. Pond is the revenge of one of history's losers.

Except, of course, Irving K. Pond, is no loser, other than, perhaps, in posterity.  With his younger brother Allen, he was one of the most important practitioners of Chicago architecture's first Golden Age, as certified by no less than the self-proclaimed “World's Greatest Architect”.  At the opening of the new City Club Building in 1910, Frank Lloyd Wright declared that America had produced but three creative architects: Louis Sullivan, Wright himself, and “the Ponds, Irving and Allen.”
If you're looking for a Holiday gift for a true Chicago history and/or architecture buff, you can't do better than The Autobiography of Irving K. Pond.  I'm not going to oversell it.  It's not great literature, or a compulsive page-turner, but as a portrait of Chicago and its architects by someone who stands on the other side of  the myth-making, it's as tasty as a box of chocolates, and just as addictive.
Plus, as Forrest Gump famously observed, “You never know what you're going to get.”  In the case of The Autobiography, it's the frank life story of very different kind of individual, with one major obsession Pond waits until his 80th year to disclose. He remembers how - still an infant in his perambulator - he was fascinated by the view of a young boy walking on the path ahead of him . . . 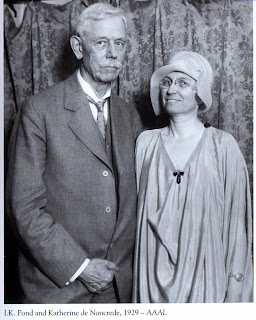 I could definitely see there was no right leg . . . He seemed not a creature of the earth . . . I never have been able to trace anything of a sexual nature in the phenomenon; but from my earliest boyhood I had had a feeling that if ever I married. my life companion physically, at least, must and would be similarly conditioned..  Is it unnatural, then, that throughout my life, a child of either sex, or a beautiful woman minus a leg, more particularly a right leg, and moving easily and rhythmically  on a crutch, or one with a foot so drawn up as to be little or not at all in evidence below the skirt, should fascinate me and attract me with strange and irresistible forces?

Flash forward twenty years.  Pond, coming to Chicago from his birthplace of Ann Arbor Michigan to take a temp job in the office of family friend William Lebaron Jenney, soon lands himself a permanent position with architect Solon Bemen just as the 26-year-old Bemen gets the once-in-a-lifetime commission of designing an entire city: a company town for sleeping car magnate George Pullman built on 4,000 acres 13 miles south of Chicago's center.  In 1883, with the town well on its way to completion, young Pond leaves to make the usual Grand Tour of Europe, finding himself on Christmas Day in the church of Santa Maria Maggiore , where his eye is arrested by a striking figure slowly making her way down the aisle . . .


As the young woman walked, or rather seemed to float rhythmically down the aisle, I could see no right foot, for that leg was shortened and she was wearing a shoe with a light metal extension which in the shadows was little or not at all in evidence.  I said to myself, “There goes the future Mrs. Pond.”

For the next three days, Pond returned to the church, trying to work up the courage to talk to this enchantress.  On the fourth, he found that she had returned to California.  He corresponded with her for  years before finally becoming engaged to her in 1889, an engagement which then lingered on year after year - “her father needed her!” - until “I suggested that our engagement might have been a mistake and that it would, perhaps, be better ended.” The poor woman, Pond informs us, never married.


I have reason to believe, through observation and experience, that this fascination exerted upon certain males by abnormality in one of the opposite sex, works equally the other way about, and that among women there are those to whom the physically exceptional in men makes a similar and equally potent appeal.

Flash forward, again, to 1929. Allen Pond has just died.  Irving,  recently turned 72, marries Katherine de Nancrede, who he has known for forty years, since the time Katherine had injured her leg in a youthful swimming accident.  The use of a crutch during her long recovery led to complications that resulted in Katherine eventually deciding to have her right arm amputated.  There's a Rosebud-like reveal of what may have been the origin of Irving Pond's fixation, but I won't ruin it for you here.

As an architect, Pond always kept himself far removed from the avant-garde mainstream.  Frank Lloyd Wright, according to Pond, “has succeeded to Sullivan's throne and now holds the scepter. Never in my life have I been a hero worshipper-- never have I been willing to let some man, whom the mob acclaims, do my thinking and lay out a course for me.”

Pond wrote of Louis Sullivan as someone, “like myself, [who was] ill content to let his life flow forever between the restraining banks of hard and fast convention,” but he was quick to add, “I never counted myself one of the so-called Chicago School . . . ”  When a member of that Pantheon finds his way into Pond's pages, you can pretty much bet they're about to be taken down a peg.
According to Pond, the first true skyscraper was not Jenney's 180-foot-high 1885 Home Insurance Building, but the nearly 200-foot-high water tower Solon Bemen constructed at Pullman five years before.  The first building to give true expression to the steel frame was not Sullivan's Wainright - “a distorted Palladian Composition if there ever was one” - but the North American Building at State and Monroe by Holabird and Roche, even if it wound being an inferior reworking of the design Pond originally submitted to the developer.
If you surmise from this, however,  that The Autobiography is the book of a bitter old man, you'd be wrong.  Irving K. Pond, in his book as in life, is an engaging and utterly charming companion, introducing the reader to all the best people: Lorado Taft, Julius Rosenwald, Harriet Monroe, Isadora Duncan, as well as giving life to others of the time who now survive only as names attached to buildings:  Wirt Dexter and Frank Gunsaulus, to name just two.
Pond was a dedicated participant in amateur theatricals, especially good in Shakespeare.  In 1885, he was one of the organizers of the Chicago Architectural Sketch Club, which lives on to this day as the Chicago Architectural Club.  Unlike his more sickly brother, Irving Pond always prided himself on his acrobatic prowess.  For his seventieth  birthday, he invited the press up to the roof of the YMCA building to record him going through his regular exercises, including handstands and airborne somersaults.

What might be mistaken for churlishness in The Autobiography is instead, I would submit, an impatience with the kind of Wrightian grandiloquence that bangs the drum as much to enthrall as to enlighten.  The greatness of a Sullivan or a Wright - or a Niemeyer - is predicated on immodesty, on the malcontent compulsion to remake the world.  Pond lacked that bravura gene and the poetry that goes with it.  Wright is the splendid, hungry beast bringing charm and menace to the party in equal measure.  Pond is the gentle craftsman remembered for the pleasure of his company - in person and in his buildings.
“The Ponds”, writes David Swan in the book's preface, “sought to create a modern American architecture without rejecting architectural stylistic traditions, but simplifying them through the emphasis of geometry and the inherent quality of building materials and construction.  In that regard, the Ponds were strongly influenced by the Arts and Crafts movement, with the emphasis on honest materials used honestly.” 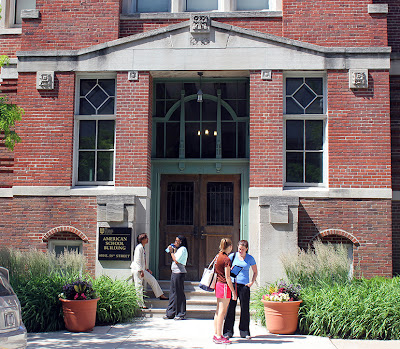 For the better part of a century after its completion, Pond's book was available only on microfilm held at the American Academy of Arts and Letters.  Finally in 2009,  as edited by David Swan and Terry Tatum, it was issued as a handsome paperback.  Swan has augmented Pond's original, very small selection of illustrations with 350 photographs and drawings.  There's also a comprehensive list of buildings and projects.
The Autobiography of Irving K. Pond is not only an invaluable reference work documenting the work of one of Chicago's most important, if least remembered, architectural firms, but a memoir that is at once both as charming as its author, and an eyewitness report, skewed in fascinating ways that may change the way you look at things, of some of the most seminal decades in Chicago architecture.

As he concludes the meditation on his life, on family, friends and adversaries now mostly dead, battles long forgotten, buildings demolished, Irving Pond again turns to Shakespeare, to Prospero's speech near Tempest's end . . .


You do look, my son, in a moved sort,
As if you were dismayed: be cheerful, sir.
Our revels now are ended. These our actors,
As I foretold you, were all spirits, and
Are melted into air, into thin air:
And, like the baseless fabric of this vision,
The cloud-capped towers, the gorgeous palaces,
The solemn temples, the great Globe itself,
Ye all which it inherit, shall dissolve
And, like this insubstantial pageant faded,
Leave not a rack behind. We are such stuff
As dreams are made on, and our little life
Is rounded with a sleep . . .


The Autobiography of Irving K. Pond: The Sons of Mary Elihu.  Edited by David Swan and Terry Tatum, with an introduction by Guy Szuberla.  Hyoogen Press, Oak Park, IL  588 pages. $40.00.