The Chicago That Never Was: The Bulletin Board Building

There were a lot of plans for the former Pine Street when it was widened and expanded with the construction of the Michigan Avenue Bridge, effectively letting Chicago's commercial district to jump the river and extended its reach.

In 1918, the North Central Association, representing principle property owners, along with the Chicago Plan Commission, commissioned several leading architects to imagine what the new district should look like, and the results were published in The American Architect that year. 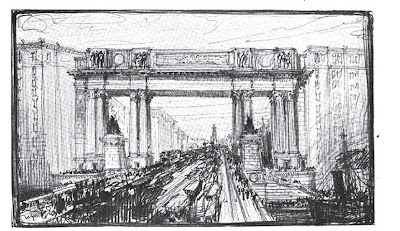 Holabird and Roche came up with a monumental entryway on the northern side of the bridge. 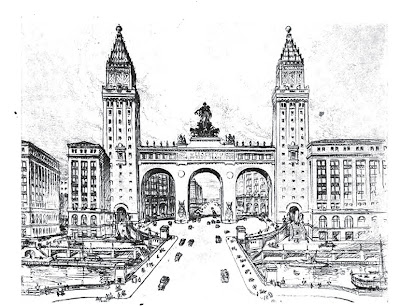 Andrew Rebori, the Architects' Committee's Managing Architect, came up with something even grander. 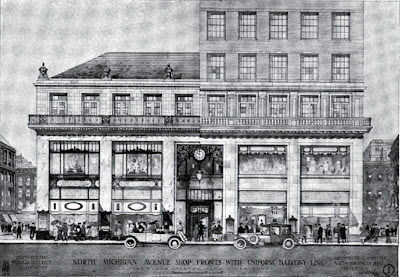 The North Central Association recommended uniform height limits of 140 feet and a continuous balcony projection nearly three feet wide, 36 feet up from the sidewalk above two floors of shop windows, as illustrated in the above drawing by Rebori. 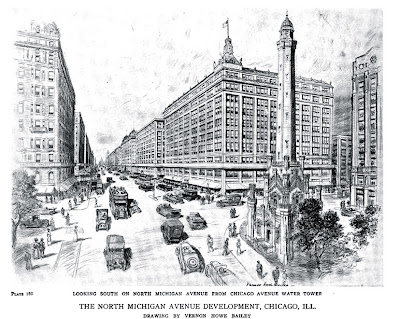 The view south from the Water Tower was denser that much of what actually exists to this day.  The southwest block, for example, is in today's actuality a sequence of two-story storefronts from Ralph Lauren to Tiffany's, far shorter than this rendering of a continuous sequence of ten-story buildings that look like those aerial views of of the Burnham Plan's anonymous, uniform blocks made flesh.

Of course, reality intervened, beginning with the completely individualistic Wrigley Building arriving in 1920, as illustrated in Rebori's drawing at the top of this post.  .  That same year, Holabird and Roche's 16-story John Crerar Library, which can be seen to the far left of Rebori's drawing. was also completed at the northwest corner of State and Randolph.  (It was demolished in 1981 for the sloping-roof 151 North Michigan.)  In 1924, the Wrigley Building Annex was built about where the "Bulletin Board" building appears in the drawing, and with the completion of Tribune Tower in 1925, the new North Michigan gateway was set, asymmetrically.

Which best represented the “City Beautiful”?  The standardized ideal? . . . 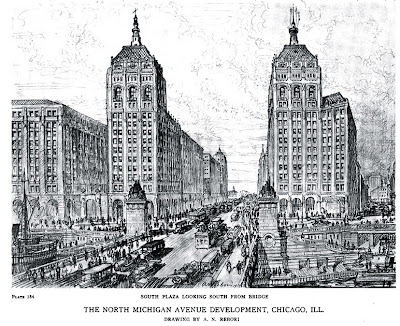 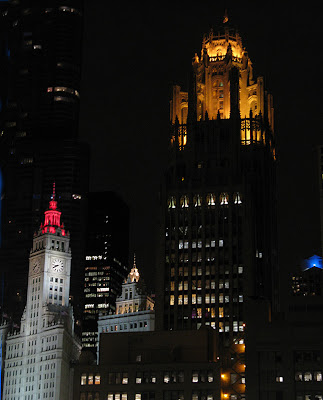