Can Signage Save Block 37?

In his email newsletter to his constituents Monday, 42nd ward alderman Brendan Reilly released renderings of proposed new signage for Chicago's beleaguered Block 37.  Apparently, it requires a zoning variance, so Reilly is scheduling a public meeting to invite comments.

The proposal, backed by the Chicago Loop Alliance, hardly seems radical, but it's probably not entirely adequate to the stated objective of securing new tenants to the substantially empty, 300,000-square-foot mall - only 35% leased, and continuing to hemorrhage tenants.  Just this month, Beard Papa closed its pedway cream puffery.   Alternative Shoes pulled out in August and Andy's Custard shut down in July.  Block 37 was acquired for $84 million by Los Angeles real estate firm CIM Group this past April from Bank of America, which had worsened the mall's problems by blocking a lease to the Muvico chain for a multiplex proposed for the hard-to-rent upper-floor space.

Early in the design of the mall, it was to include a wrap-around digital art work, quickly eliminated, leaving reflections of the  Ford Oriental marquee across the street the only animator of Block 37's woven metal facades . .  . 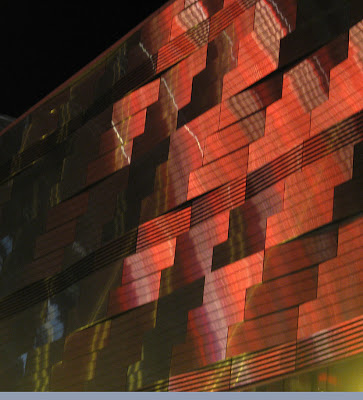 The greatest excitement Block 37 has yet experience remains the over-the-top groundbreaking ceremony then-owner Mills Corporation put on in 2005, complete with quick-change artists . .  . 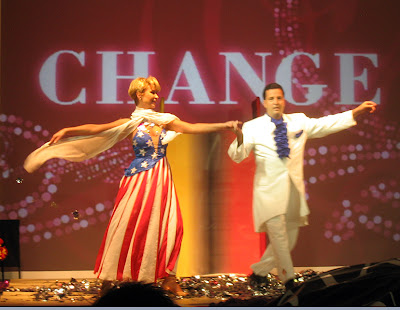 . . . and a grand finale with Mayor Daley, lame-clad dancers, golden shovels, and a burst of confetti . . . 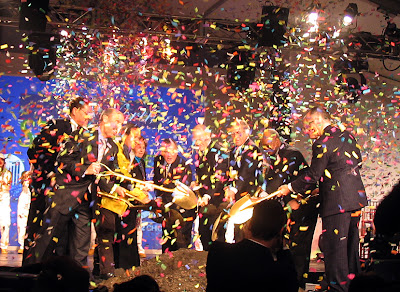 In September of 2003, when Block 37 was still an empty lot,  Marshall Field's, on the other side of State Street, put on a vertical fashion show, with models rappelling down its Burnham-designed facade. It attracted 12,000 spectators, most of whom flooded into the store afterwards.  The event was named the PR event of the year.  You can see video of it here.
More than signage, perhaps a little theatricality is what can differentiate what is now a mall without personality.

I don't think the singage could hurt, but also I don't think it will make much difference in the end. Block 37 is a fiasco, and was from the moment the original buildings were torn down. The curse continues...

A mall needs to look like a MALL. How about a nice, centrally-located arched doorway on State St? The curved walkways don't help, either.

Get the food court open on 3. You should have seen the crowd in the Macy's basement food court and that food is not that great