Chicago Macro and Micro: Wacker re-opens while a bike expressway comes to Dearborn

Both cars and bikes scored victories this week.
On Friday, a multi-year nightmare finally ended as the reconstructed western leg of Wacker Drive  opened.  Officials marked the conclusion of the $300 million project with a promise that it should keep motorists and pedestrians both from having to deal with detours and temporary sidewalks for at least another 75 years.  What hasn't changed, however, is that Wacker is a basically unattractive, anti-urban thoroughfare, with a lot of grand buildings fronting on what amounts to an expressway with stoplights, a place where, despite wider sidewalks and touches of ornament, pedestrians are tolerated more than embraced. 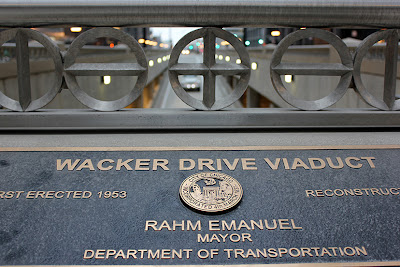 At the same time, a very different kind of expressway was coming to Dearborn from Polk to Kinzie, as a lane of traffic was being removed from the northbound, one-way street, to allow CDOT crews to demarcate a dedicated set of protected, two-way bike lanes along the western curb.  Cars will actually park to the east of the lanes.  We'll we watching to see how well everyone adapts. 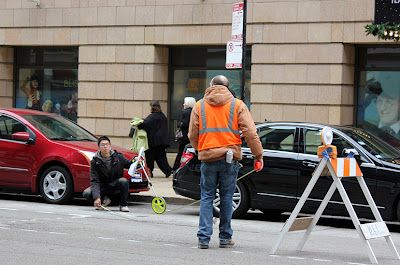