This Thursday: Burnham's Legacy, Archeworks Critique and a new Plan for Grant Park

We've got three late listings, jamming up on Thursday, December 18th, the last active day in the calendar before everything shuts down for the year-end holidays. (Not to mention Daniel Barenboim's return to Chicago for an all-Liszt recital at the Harris Theater.)

At 12:00 P.M., at the Chaddick Institute of DePaul, architectural historian and author Sally A. Kitt Chappell will lecture on Chicago's Urban Nature: The Legacy of Daniel Burnham, going up against the Art Institute's Joe Rosa at a 12:15 Landmarks Illinois lecture at the Chicago Cultural Center, Are We Ready to Landmark Goldberg

Buildings?, a prelude to the upcoming Goldberg show in the Department of Architecture's new Renzo Piano Modern Wing gallery.

Starting at 5:30, with a cocktail reception for its new gallery, Archeworks will be conducting its Semester Final Critique and Review, open to the public, of this year's three student projects, including pocket parks for Little Village, the stewardship of six of Chicago's major community parks for the proposed 2016 Olympics, and a consideration of water scarcity and pollution worldwide.

At at 6:30 P.M., at Daley Bicentennial Plaza Fieldhouse, the Grant Advisory Council 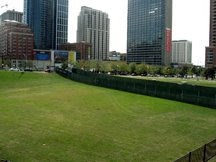 will be offering up Planning for the Southwest Corner of Grant Park: public input, promising to review new plans by EDAW and Adrian Smith+Gordon Gill Architecture for the sloping section of Grant Park east of Michigan and north of Roosevelt that has most recently been bisected by a ramp access point for trucks supporting construction of the new Metra 11th Street station.

You can find details on all of these events here.

The southwest part of Grant Park must also remain OPEN, FREE AND CLEAR!! Bob O'Neil has a very strange notion of "conservancy".

It is time that Bob O'Neill and his cronies be replaced by competent and ethical persons.

The Children's Museum debacle exposed the flaws of that Grant Park Conservancy and that peculiar advisory council.

At the south end of the Park, Bob O'Neill and his group decided that a good use for a beautiful green space was to litter it with dozens of giant rusted forms, i.e., the "Agora" artwork. Oh, yes, they are smarter than us and "understand" the work.

Just look at the Agora---a perfect example of the Emporer's New Clothese--and you will realize that these modern art officionados are bound to do something stupid with the green space that is the subject of the upcoming meeting.

I've never been sure that Mr. O'Neil has "a group" apart from the developers whom, I understand, support the organization, which appears to consist of Mr. O'Neil. I would like to know more. He does arrange for many interesting programs that are well attended, and I appreciate that. But he does not seem to have a point of view that puts the general public interest first.

I would love to see a conservatory like Lincoln Park and Garfield Park have in the south end of Grant Park. Considering how much winter we have in Chicago, it would be great to have a green, plant-filled indoor park for residents and downtown workers to enjoy in the winter.