Blair Kamin took some time off Sunday from covering the usual suspects to focus on the latest work from one of Chicago's most talented, yet often under-the-radar architects.

Andrew Metter toils for A Epstein and Sons, a powerhouse international firm that often operates in the shadows, as architects of record doing the grunt work for other firm's designs. Henry Cobb was the branded architect for the new Hyatt Center on Wacker, Lohan Anderson the up-front firm for 353 North Clark, but Epstein is provided architect of record services for both projects.

Occasionally, Metter and Epstein's annex/5 design studio gets to shine on their own. I 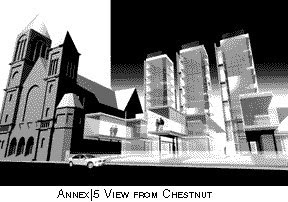 first encountered their work in an 2003 competition to find a reuse for the historic - and now apparently doomed - St. Boniface Church at Chestnut and Noble, which combined new residential construction with converting the actual church to a day-care center.

For Stanley Tigerman's 2004 Ten Visions exhibition at the Art Institute, Metter teamed up with Margaret McCurry for a proposal to reclaim "found infrastructure" - train lines, river embankments that carve up neighborhoods - for activities that resist gentrification. "The idea," said Metter, "was to reclaim the ground for income-producing activities: hothouses, farmers' markets, etc....The other idea is that along the river you establish manufacturing." Factories are submerged, the roofs become eco-parks, with housing for the workers. "There's no such thing as affordable housing," Metter argued. "It's all subsidized by the government. So the idea was to design a new topology: a house and a job. It's a new building type and mental construct-not just build homes and figure that people will get checks from the government, but build it in conjunction with income-producing opportunities." 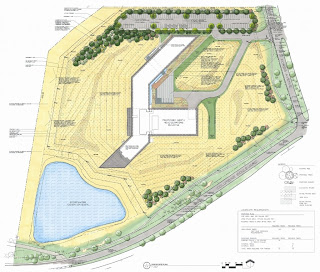 In this Sunday's Trib, Blair Kamin enthuses over Metter's latest project, a new headquarters for Serta Mattress on a 20 acre site in Hoffman Estates. I remember being struck by the design when Metter presented it at a Chicago Architectural Club session a couple of years

ago. Instead of the usual suburban tabular rasa, it actually works with the natural topology, creating an elegantly detailed, streamlined presence that hovers almost weightlessly above the surrounding prairie. Metter is also a highly capable photographer - damn him - and the Trib has put up a portfolio of handsome photos of the Serta complex, which you can see here.

Lynn,
I believe the AOR for 300 N. LaSalle is Kendall Heaton out of Houston, TX, not Epstein.

Thanks for the heads-up. Correction made.

where is 300 N. LaSalle mentioned in the piece?

it doesn't anymore. the reference was in error and has been updated.

I've seen that building a couple of times and was struck by it even whizzing by, thanks for filling in the story behind it.

Hey, another building I'm curious about but can't seem to find-- at the MCA last year I saw some stuff about a park district facility being built down south, like around the steel mills (I think it's actually very close to where Leopold & Loeb dumped Bobby Franks), with a very green design... not sure if it's actually being built, was proposed, already exists, what, but I can't seem to find out what it is or who did it. Do you know what I'm talking about here?