Do you "like to watch"? BPO says, come right in! 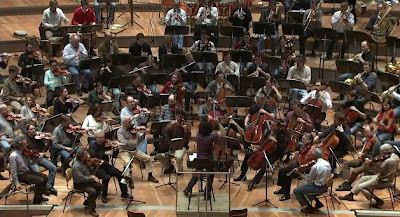 And for forty days and 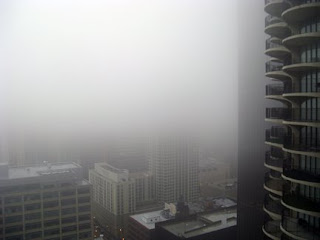 forty nights, it rained. And when it wasn't rain, it was drizzle. And it was cold. And it sucked.

Well, maybe it won't wind up being quite so biblical in proportion, but right now, life in Chicago is like living in a rain barrel, minus the rustic charm. Maybe that's why last night's Chicago Symphony Concert with Pierre Boulez had no small measure of empty seats.

Chill and drizzle were also the watchwords in Berlin last night, as wunderkind conductor Gustavo Dudamel opened Saturday's concert with a performance of Rachmaninoff's Isle of the Dead. I don't know if there were empty seats in the Philharmonie, as well, but I would have loved to have been there.

And now, it seems, I can. In this weekend's Financial Times, Laura Battle reports on the Berlin Philharmonic's bold new experiment and videocasting concerts - live - over the internet. For €9.90 (about $12.50), or €89 ($112.50) for a season ticket and unlimited archive access, you can access the BSO's Digital Concert Hall, where you can listen to and view concerts live.

Battle reports that 2,500 people logged onto the BPO's first streamed concert this past January, with 10,000 now registered with the site. The fear, of course, is that it will cannibalize ticket sales, but I would argue that, by expanding the regular audience for classical concerts, it stands only to increase the appetite for live performance. The Metropolitan Opera's HD broadcasts haven't depressed live attendance any more than telecasting Cubs games keeps Wrigley Field from selling out.

Nothing, of course, can be a substitute for being in the hall, of the sense of shared presence between you and the performers, which, in its most golden moments, can have thousands of people breathing as one. You are not confined to the camera choices of a director. You can look wherever you want (at the CSO, last night, you could, for example, watch the woodwind players - including a striking blond stringer flutist - inserting ear plugs just before the expanded brass section right behind them launched into Janacek's blazing fanfares) . . . or choose to close your eyes and just listen.

But, as with the BBC's audio streaming of the Proms each year, listening - and now watching - live - can impart a sense of the "one timeness", as Battle quotes Daniel Barenboim calling it, of a unique event where music lives in the moment and then disappears, except in our memory's afterimage - into the stream of time.

Last night's CSO concert is a perfect example, from the burnished performance of the Sinfonietta, slightly less ectastic than I would like, but then that's not what you expect from Pierre Boulez, to a mesmerizing performance by the orchestra with soloist Frank Peter Zimmerman of the rarely performed Szymanowski 1st Violin Concerto, and an equally rare performance of Igor Stravinsky's complete Pulcinella with a trio of vocalists - the early numbers being a bit droopy but soon capturing the full sparkle of music that is, at once, spiky, witty, loving and charming. Despite my seat neighbor's declared antipathy to "modern" music (none of the pieces on the program is less than 80 years old), the concert, and the physical experience of being in that hall with those performers at that time, created an intensity of enjoyment and engagement that cannot be duplicated in replication.

That being said, I also draw enormous enjoyment from the Proms concerts - the rare performance of Janacek's opera Osud was one of the high points of last season - and I'm looking forward to testing the Berlin waters. Next Saturday's concert opens with Elliott Carter's Boston Concerto, April 25th sees Bernard Alois Zimmerman's Requiem for a Young Poet, in May Seiji Ozawa conducts Elijah, Claudio Abaddo returns with Schubert's Rosamunde, three songs from Mahler's Das Knaben Wunderborn with Angelika Kirschschlager, and Debussy's La Mer, and in June, Pierre Boulez conducts his Notations for Orchestra I-IV and VII.

Check it out for yourself here.