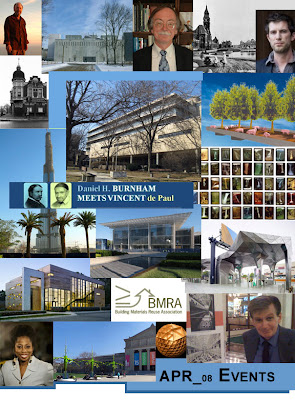 I must be sick. I'm actually publishing the April calendar of Chicago events before the month begins. But then, you'll probably need to a couple days preview to let you decide how many of the 70 - count -em - 70 events you'll be able to shoehorn into your calendar. (Google and iCal to come.)

Doug Garofalo and Eric Ellingsen give gallery talks at the MCA's big Buckminster Fuller exhibition, where Olafur Eliasson will also lecture even as he's putting the finishing touches on his own MCA show opening May 1st. Clyde Baker will talk about engineering foundations for the world's tallest buildings for SEAIO and the Structural Engineers Foundation and SEAOI holds its annual Bridge Symposium.

DePaul's Chaddick Center offers up an afternoon conference on Daniel Burnhams's plan for Manila and Baguio in The Phillipines, acting commissioner Chris Raguso talks about changes in Chicagos's planning departments for Friends of Downtown. Richard Kieckhefer discusses Architecture for Reformed Liturgy at the Loyola Museum of Art.

An especially troubling aspect of the month's events is that I will be foisting myself off on the public, not once, but twice, at CAF, on the 6th with a gallery talk for the Boom Towns! Chicago Architects Design New Worlds exhibition that I guest curated there, and again on the 29th with a lunchtime lecture on George Pullman and his privatized town planning. Apologies to all in advance.

One of the most important events in April will undoubtedly be Grahm Balkany's April 20th presentation, Gropius in Chicago: A Legacy on the Brink, which will cover his expanding research on Gropius's role in planning and designing a series of striking buildings for Michael Reese hospital, now gravely endangered with being bulldozed into a characterless tabula rasa for an athletes' village for the 2016 Olympics.

Amazingly enough, this only scratches the surface of all the great events being offered up in April. Preview them all here.

Thanks for listing the "Burnham Meets Vincent" conference. We'd love to have you and your blog friends attend. We have a great panel and a very promising participant list that will add to the discussion. All are welcome!