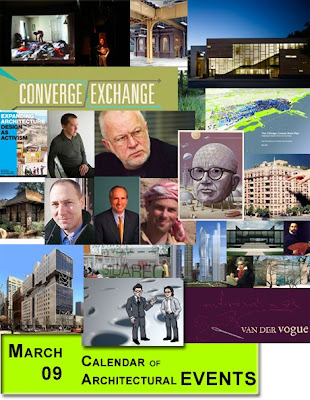 Where do you stand on human cloning? You better be pro - or possess multiple personalities - if you have any hope of keeping up with the over 60 architecture-related events on Chicago's March calendar.

The logjam begins on Tuesday with the 100th presenter at Pecha Kucha Chicago, with a roster that includes Dan Wheeler, AIC's Duke Reiter, landscape architect Peter Osler and cartographer Dennis McClendon. And then it just never stops.

Want academics? There's UIC's Robert Bruegman and Harvard's K. Michael Hays at UIC, Larry Beasley's Dream for a True Urbanism in Abu Dhabi at CAF, and archeologist Geoff Emberling on the World's Earliest Cities for APA Chicago. Developers? Richard A. Hanson of Mesa Development talking about The Heritage and the Legacy for CAF, and King of River North Albert Friedman at a Crain's Chicago Business forum.

More? Graham Garfield talks about the "L" for Landmarks Illinois, Benet Haller on the Chicago Central Area Plan Six Years Later for Friends of Downtown. A full range of informative programs at the Chicago Center for Green Technology. Kate Stohr talks about Architecture for Humanity at MCA. Plus this year's edition of the Chicago Modernism Show and Sale.

And if you're really desperate, I will again be inflicting myself on unsuspecting onlookers with a Saturday, March 14 gallery talk for my exhibition Booms Towns! Chicago Architects Design New Worlds, resurrected at CAF through May 1st.

It's enough to make your head explode. Fire up your datebook, and check it all out here.

How about creating this calender in Google Calender and making it public? That way we could import it into our own calendars.

Oh, god, even more work? But it's an interesting idea. I'll have to experiment with this. Thanks for the suggestion.

HAHAHA - I just sent you one more!!

you are right... you do too much... thank you for being a terrific critic and observer for chicago. ...as such I present to you... your calendar googlified! Huzzah! My work was a simple cut & paste job compared to your consistent dedication to our fair city.

For those of you that would like to overlap it with your google calendars: http://www.google.com/calendar/ical/l4jgrpme5b3f8plf6bt4f1alss%40group.calendar.google.com/public/basic.ics

and the xml link: http://www.google.com/calendar/feeds/l4jgrpme5b3f8plf6bt4f1alss%40group.calendar.google.com/public/basic

ok, so, you can import this calendar into other calendars etc. i'm always missing an event i was meaning to attend and checking archchi+ a day late. there are a couple drawbacks, links aren't all that good, and pictures are a no go, (yet.) Hopefully, that can be worked out and a google calendar can look as good as the original archchi+ calendar page.

let me know if there are any broken links!

and lynn, seriously, thanks. I enjoy your blog everyday.