The Girl Who Cried 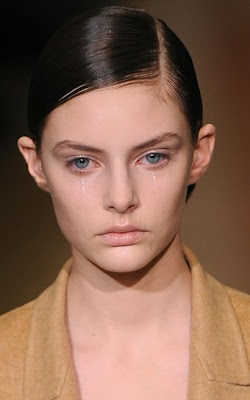 She is living a dream. She is Auguste, born in Lithuania, now in Milan, the cradle of fashion. Dressed in the highest haute couture, her face, her hair, her body, are shaped, colored, painted and blocked. An actress playing a role or a blank cipher, to the designer's whim. She is poked and prodded, tweaked and transformed. Lights blaze and blind. For the presentation of the cloth.

Auguste is both omnipresent and invisible, a fetish object and a commodity.

A child become a woman, hair slicked down to look like a boy.

Hundreds of pairs of eyes, hungry with boredom, stare greedily for something sexy, something unique, something new to set pulses racing.

A parade of strutting mannequins as relentless and rhythmic as an assembly line take their turn, strike their pose, and depart. A wall of cameras flash with a muffled thunder of clicks. Next, next, next, next.

Auguste walks down the runway. Her gaze is inward, as if she were somewhere else. The audience gasps. She is crying. Small rivulets of tears as sharp as knife blades fall from her hooded eyes, blue as ice, iridescent scars against Auguste's pallid, perfect face.

Compulsively, each person in the crowd who sees Auguste inwardly asks, why is she crying? Did her shoe pinch? Had she been treated rudely backstage? An allergic reaction?

Clearly, none of these explanations will suffice. The publicist deflects, notices no tears, and denies they were seen by anyone else. Real tears, real feeling, puncture the slick, seamless artifice as a pin punctures a balloon, with shock and violence. How thin, how porous the membrane that separates the pursuit of beauty from the desperation of desire, which empties even as it invests.

You reveal yourself in what you see.

(thanks to Opera Chic.)