Once More into the Woods - Haitink's CSO Mahler 1 released - better than Raisin Brahms?

The birds chirping in the morning, the stretched setting of the DST sun, the spring monsoons, followed by howling winds and biting cold - nature is back full force in 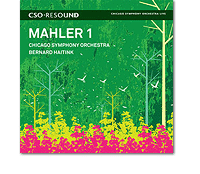 Chicago, and what better way to celebrate than with Gustav Mahler's own Pastoral, his Symphony No 1, just released in a performance conducted by Bernard Haitink.

An interesting aspect of the performance, according to the CSO press release, is that "Haitink chose to go back to the composer's intentions for the famous "Frère Jacques" theme that opens the fourth movement. Traditionally played by solo double bass, the passage in fact was written to be performed in unison by the entire bass section, muted; however, after discovering this was beyond the capability of most orchestral bass sections, Mahler compromised and gave it to the solo principal player. Haitink has reassigned the haunting passage to the entire CSO bass section here--the first conductor of the Chicago Symphony to do so."

I expect to be downloading as soon as I scratch up a sawbuck from beneath the sofa cushions. You can beat me to it by going to iTunes, for $9.99, or buying the antique versions in CD or SACD form from the CSO store. On May 12th, you'll be able to get the recording in audiophile lossless download from HDtracks.

The perfect accompaniment to Chicago's next blitz und donner fest, which should be coming round in about . . . ten minutes.

. . . and lest you might still be starved for culture, we give you: