Does a proposed memorial to architect and planner Daniel Burnham represent an overdue tribute or a colossal failure of nerve? Should 2009 be the year to finally begin realizing Burnham's vision for a grand gateway to Chicago's lakefront? A story in three parts 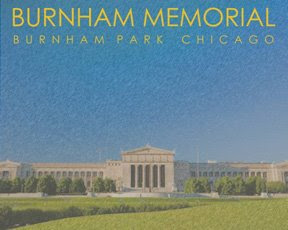 I. The rebellion against a closed competition to design a memorial to Daniel Burnham.

II. Is There a Disconnect Between Competitions and Chicago Architecture? 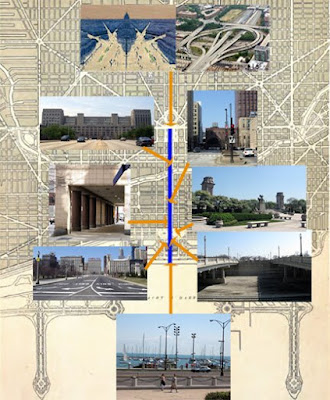 III. Restoring Burnham's Vision for a Grand Gateway to the Lake.

First, some notes on history. The planning and construction of the Congress Expressway was done decades before easy federal Interstate Highway money would be dreamt of. Edward Bennett himself, in the late 1920s, had to fight for the West Side Superhighway to be built along Congress rather than Monroe (I put Bennett's 1929 rendering of Congress Parkway on the same website that you, um, borrowed the Guérin harbor rendering from). And Burnham's explanation of the rationale for Congress as the city's new axis, rather than Van Buren or Harrison, was that it was easier to cut an artery through the middle of a block than to widen an existing business street. So I wonder how careful he would have been about the Auditorium Building, at the time considered obsolete and in serious arrears on back taxes.

On to Queen's Landing. An absolutely absurd situation, with His Importantness Bob O'Neill coyly suggesting year after year that a fabulous new bridge is awaiting construction any day now, and CDOT claiming with a straight face that a pedestrian signal there cannot possibly be coördinated with adjacent signals.

So imagine my surprise three weeks ago to learn that the new Central Area Action Plan proposes spending $500,000 to, by 2014, install an at-grade crossing at Queen's Landing!

thanks so much for your thoughtful post. a few comments:
1. you got me. it was 1:30 a.m., I was finishing up the piece and I realized it needed a positive image with which to close. the scan on the Google books edition was lousy, so I cribbed your beautiful scan from the Burnham Centennial website. My apologies. I've added a paragraph with image credits at the end of the piece. If the folks at the Centennial Committee - or you - would prefer I not use it, I will gladly remove the scan.
2. You're absolutely right - I don't think Burnham would have been particularly sensitive to the buildings along the route, including the Auditorium. One minor disagreement, you state "planning and construction" for the Congress expressway was done decades before the Interstate Highway act. I agree on planning (and here's a link to your great scan of Bennett's 1920's rendering) but the actual construction of the expressway didn't begin until the act made the funding available, and it was executed very much in the auto-centric euphoria of the 1950's.
3. Bob O'Neill and the Queen's Landing story is one of the great sagas of how planning and development actually works, versus some of the more misty-eyed recollections we're seeing as part of the Burnham retrospective. It's driven by someone who presents himself as a community leader (Bob O'Neill, who is actually a paid lobbyist advancing the interests of big Michigan Avenue landholders and the mayor) of a community organization that really isn't. (The Grant Park Advisory Council, emphasis on Advisory, which, as far as I can tell, elects no officers and takes no votes on controversial issues, but is, instead, the vehicle O'Neill uses to stifle and deflect dissent from the objectives of his employers.) I look forward to seeing the revised Central Area Plan, but we don't need to wait until 2014. A stoplight and a small dollop of political guts is all that's required.

Again, thanks for all the great info and comments.

No worries about the scan; I was just hoping for a link to planofchicago.org I deliberately put the website up in HTML so high school students and others could easily steal the images for History Fair projects and reports.

Anyway, virtually all of Congress Expressway was open to traffic before the Federal Aid Highway Act of 1956 was even drafted. State to LaSalle opened in 1952, First Ave to Mannheim in 1954, Ashland to Laramie in 1955, and LaSalle to Ashland plus the widened Michigan to State section in 1956. One thing that made the highway so difficult to build during the 1950s was the necessity of finding local funding. The reason we honored Dan Ryan by renaming the South Expressway is that in 1955 he convinced the General Assembly to allow the county to issue $245 million in expressway bonds secured by future fuel tax revenues, to speed up the construction process. A year later, such Herculean local efforts became unnecessary, but Chicago had already built the Edens, the Calumet, the Kingery, the Ike, and the Tri-State and East-West Tollways. There's a map of expressway opening dates at http://www.encyclopedia.chicagohistory.org/pages/2285.html

Lynn, thank you for telling your readers about that sham "council" that is actually just Bob O'Neill.

It is disturbing that both the Tribune and Sun-Times continue to quote Mr. O'Neill as if he is anything other than a shill. They give him a platform, perhaps due to their simple-mindedness, laziness, or conflicts of interest within those papers.

Heck, Mr. O'Neill himself is a walking conflict of interest.

If there is anything certain, it is that the Chicago Park District will botch this memorial.

One only needs to look at the Agora sculpture to realize that the Burnham memorial will be a bust.

What's wrong with the Agora? Nothing, if you think that green space in Grant Park should be cluttered with dozens of massive, rusted hulking structures.

Of course, the creators of this eyesore---actually, dozens of eyesores--would say, "Oh, you do not understand 'Art'."

To which I would reply, "You do not understand 'Park'."

Anyway, the same geniuses are probably going to harm the vista along the north-south axis and the east-west axis by large abstract piece of junk--er, "Art"--in front of the Field Museum.

And then they will tell us that we don't "understand" it.

So if you go to the Chicago Architectural Club website they have a banner about crashing the party - but is it a real alter- competition?