This is Learning from Vancouver? 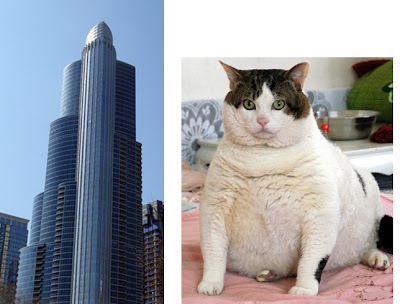 OK, not everybody has to be Kate Moss, and not every building has to be supermodel skinny. Still, Chicago, which has long heralded the Vancouver example of tall, thin buildings that bring density to the urban core while maintaining plenty of light and air circulation, talks a good story, but once there's money to be made, it all tends to go out the window. That was confirmed when Sam Assefa, director of land use and planning policy and a key advocate for the Vancouver approach, was recently unceremoniously dumped in a reorganization of Chicago's planning departments.

The Trib's architecture critic Blair Kamin has been singling out the high-rise work of architects Pappageorge Haymes for praise, but the fact of the matter is that they've provided cover to city bureaucrats inflicting major damage on the city's lakefront, especially at 600 North Lake Shore Drive. It's an handsome building, split into the two as a sop to provide more light, but it still often places the adjacent Ohio Street Beach into deep shadow. 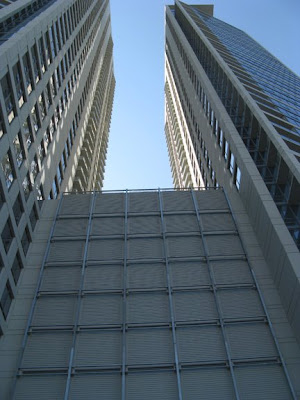 To be sure, it's not Pappageorge Hayme's fault, but 600 North is a structure that should never have been built. A clown car load of aldermen muscled it through as they huffed and puffed at protesting activists. "This is not a communist country!" the Trib reported then alderman Burton Natarus as railing. "You act as if this beach belongs to you personally," Bernard Stone ranted. "It belongs to all the people of Chicago," he lectured, even as he was stealing a finite and irreplaceable resource placed in his trust for the benefit of all the city's citizens - sunlight on a public beach - and handing it over for the profit of a single private developer. 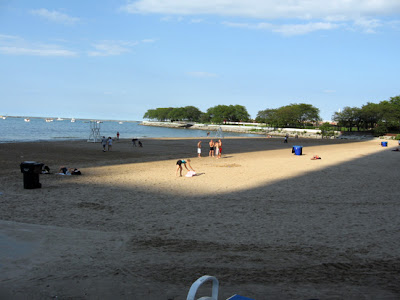 The situation at Roosevelt Road lacks that kind of venality, but a building with the massiveness of One Museum Park still plays havoc with shadows and light. It's an interesting problem, as the original concept was to create a southern street wall to Grant Park that would complement the historic landmarked street wall down the west side of Michigan Avenue. That street wall, of course, is the opposite of Roosevelt, composed primarily of medium rise buildings standing shoulder to shoulder with nary a gap. 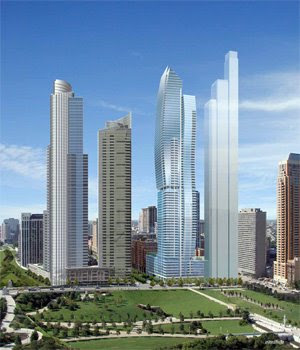 That kind of scale apparently no longer offers an adequate level of profitability, and so we get east Roosevelt Road, composed entirely of just four huge towers, one completed, one under construction, and two more planned (in the current economy, don't hold your breath). Continuous podiums at street level, portly towers above, with gaps that dissipate any visual sense of a street wall's feeling of closure. And would anyone really want a continuous street wall 60 stories high? At this point in Chicago's development, is a truly civil streetwall like Michigan Avenue any longer possible?

And who knows? With its rounded, stepped massing, One Museum Park, amiable and Rubensesque in a lost spaceship kind of way, could actually wind up becoming an object of affection, just like Edgar. 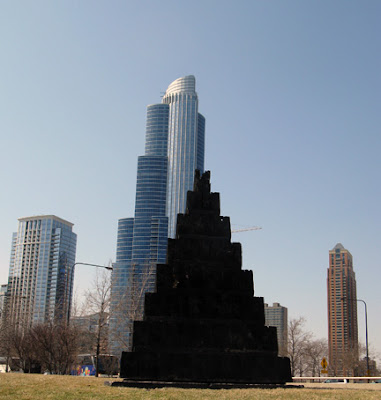 I was at a recent presentation given by Jeff Renterghem of Pappageorgehames, he should some interesting slides of OMPE, specifically that depending on the vantage point the building the really takes on different qualities. You are correct that viewed directly on from the north it is quite wide and almost squat looking, but viewed from the west southwest side it actually looks quite slender because the mass of the building all lies roughly within a thin band. Just something to think about. It really is a building that changes depending on your vantage point (much like the trump tower or the sears tower)

I had really hoped to attend Renterghem's talk, but it wound up I couldn't get away.

It's absolutely true that the building offers up different profiles, including a much thinner one from the east, but design isn't like a carbon credit. You don't get a gimme on an overscaled profile just because you created a slimmer one on another side. The best architecture sustains a sound sense of proportion throughout the design.

I believe that is correct. Renterghem stated that part of the problem was that the height limit on the building, coming from the city, changed several times. Apparently the original design was a much more squat building, which was deemed to lack the aesthetic ‘oomf’ they were looking for. As a result, the height allowance was increased. This cycle continued several times. Ultimately I believe the central core rising higher would potentially be a nice improvement, but from what I gather, by the time this height was permitted, the project was too far along to revise the foundations and other design aspects to accommodate the change.

Please don’t take this as an excuse as I intend it as just a brief account of the occurrences from what I gathered during Renterghem’s speech.

My understanding is that Sam and the city were not trying to replicate the Michigan Ave Streetwall, but were rather attempting to balance the conditions on the north end of the park....Aon, BCBS, 340, etc...

Jack, I can certainly understand the intent, but I think what fights against any sort of realization of the idea is that the Roosevelt Road mirror is little more than a stub, about a quarter of the length of the Randolph Street wall, which extends all the way to Outer Drive East, providing a real sense of enclosure. With the museum campus to the east, of course, that's pretty much impossible at Roosevelt, so the procession of buildings, no matter how large and tall, still has a kind isolated and unfinished feel to it, as if Columbus Drive was the edge where the earth simply drops off. That's not the experience on the ground, of course, but from the wider perspective the structures on Roosevelt look less like a wall, however permeable, than an island enclave.

Not that the current market could support it, but do think placing a supertall structure or two, a few blocks behind the Roosevelt "wall" might give the sense of depth and density you are looking for? or would this reinforce the isolated island sense you described?

More than the aesthetics, I seem to be the only person concerned about how much this wall of buildings will shadow Grant Park (all the way to 11th at 2 pm on Sep. 10th, for instance). My protests at Plan Commission were, of course, as utterly ineffectual as any other testimony offered before that group of rubber stamp clerks.

"Tall and thin" is always the response. But these towers are as close together as possible and still sell units facing east and west. The one called Grant Park Tower 3 has to actually hang out over the public sidewalk on Indiana. How can a building be called "tall and thin" if it won't even fit on its own site? Once the afternoon sun is a little west of south, it can no longer slip between the buildings.