God save us from the tasteful.

In selecting the new Burberry store on Michigan Avenue as her calling-card critique, interim Tribune architecture critic Cheryl Kent has chosen to rechannel Blair Kamin's worst schoolmarm tendencies, slamming it as "a screaming chrome ornament", "a boor", and a "noisy drunk", concluding, "That's sort of a bad joke like the Burberry store is a really not-funny, bad joke."  (Seriously - does that last sentence even qualify as English?)
To be sure, there's a lot to be offended by on Michigan Avenue, from the ballroom bunker of the Marriott, to the sugar-candy grotesque of John Buck's 600 North Michigan.  To be offended, instead, by Burberry's, however, is an admission of catatonia.

Once upon a time, as can be seen in remnants such as the Jacques Building and Women's Athletic Club, north Michigan Avenue was the chic street of the city, with upper-end shops, galleries and restaurants housed in classically-styled edifices.  That day is long gone.  At some point in the 1970's, the Mag Mile began to usurp State Street as Chicago's great commercial thoroughfare, and it has gradually become a series of malls separated by stretches of architectural glop. And lest we over-sentimentalize the past, remember that the Mag Mile was once home to a Woolworth's Five and Dime, and that the current site of Tiffany's was previously a McDonalds.

Compared to Robert Stern's goofy tin facade for Banana Republic, now replaced with a "tasteful" glass front, the new Burberry is the height of reticence.  If you want to be offended by something, be offended by the growing inequality of our current Gilded Age Redux, not by the highly engaging design of the new Burberry's, which opened late in November.  It replaces a far more modest two-story precessor . . . 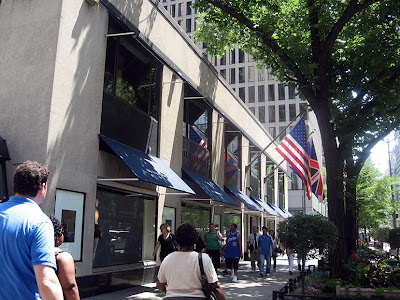 . . . with a five-story-tall, 25,000-square foot flagship squeezed onto the same small site at the northeast corner of Michigan and Ontario. 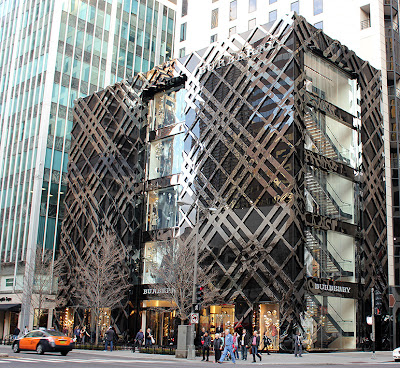 Against the taller buildings to its north and west, it looks a bit like a stylish handbag placed on a table next to the bookshelves.
Burberry's is Chicago's late entry in the luxury retail flagship wars that have, until now, passed the city by.  Those wars of conspicuous consumption could said to have started in 2001, when Prada turned Rem Koolhaas loose to create a $50 million New York City flagship.  It was followed in 2003 by an even more spectacular Tokyo store by Herzog and de Meuron that cost  $83 million and was described by Deyan Sudjic as "a new building type, part billboard, part architectural gift wrapping."  New manifestations continue to pop in the world haunts of the super-rich - London, Singapore, Beijing, etc. - including another glittering box by Toyo Ito for shoe emporium Tod's on the Omotesandon in Tokyo.
Until now, Chicago's pretensions of being a world-class city have still left us short of qualifying for this type of architectural hyper-bling.  Here, Prada set up shop in a simple whitewashed brownstone on Oak Street, while Tod's has contented itself with a small showplace in One Mag Mile.
Michigan Avenue's most spectacular retail structure staked out a far more democratic price point.  Solomon, Cordwell Buenz's Crate and Barrel store remains, even two decades after its opening, a beacon of modernist elegance.  With its gently enceinte swell curving at the corner, it's a worthy successor to Louis Sullivan's Carson Pirie Scott.  An open glass box, visually centered by a sequence of open escalators, its uses the display of goods and movement of shoppers to animate the act of consumerism into a kind of architectural street theater.  It anticipates the clean, minimalist Apple Store designs that would come to define retailing in the new century. 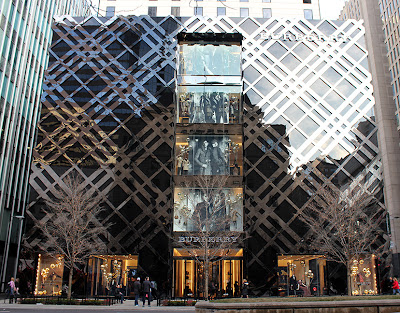 If Crate and Barrel is Michigan Avenue's white princess, Burberry's is its new dark knight.  Its five-story-high facade of dark glass and chrome, articulated into an homage to the brand's distinctive Tartan check, has the look of a fortress drawing you in through the vertical shafts of light above the entrance and alongside the bravura stair against the southern wall.   It's a personification of high-end retail's tricky balance between snob appeal and inclusion.

The hand of Burberry Chief Creative Officer Christopher Bailey, a/k/a the "brand czar", can be seen in the design of every aspect of the Burberry experience, including the new Michigan Avenue store, carried out by Callison Barteluce architects of New York. In a 2009  interview with Lauren Collins in The New Yorker, Bailey talked about his own experience as a middle-class sixteen-year-old going to buy the gift of a watch for his mother at a designer store . . .

Bailey is clearly looking to create a more inviting scenario for Burberry in general, and Chicago in particular.  According to Crain's Chicago Business's Brigid Sweeney, he designed Burberry Michigan Avenue as total retail theater, with floor-to-ceiling "digital walls" and a hyper-connected environment which may have more Apple product than Apple's actual store up the street - iPhone docks, untethered iPads for salespeople and embedded iPads for customers.  Plus 500 loudspeakers and 100 display panels. 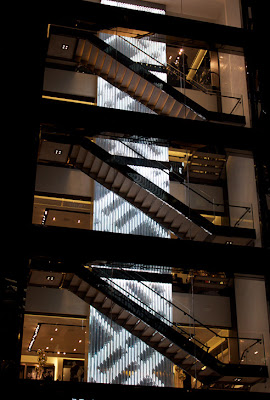 It's that balance between the physical and virtual worlds that Burberry - and every other retailer - is working overtime to figure out.  The pundits keep telling us we've entered a brave new Amazon world where on-line retailing is king and bricks-and-mortar a lingering anachronism.  The unceasing crowds on Michigan Avenue would suggest otherwise.  Burberry CEO Angela Ahrendts told Crain's,  "How we use technology was going to be our greatest differentiator," and adds that in the luxury segment, 70 percent of the customers shop on-line but shop in the physical stores.

The photograph that accompanied the Tribune review depicts the new Burberry facade in the highest possible contrast, the chrome elements sticking out like plastic on a cheap radio.  Using a photograph that documents your opinion is always fair game, but the way the inset strip of windows doesn't read at all is an over-the-top misrepresentation.

As with Blanche DuBois, bright daylight may not always create the most flattering view of the Burberry store.  Yet even though the sun illuminates the chrome elements very strongly - you can think of it of a gift box densely wrapped in a shiny weave of metallic ribbon -  I've never really found it, in any of my real world encounters, as harsh as Kent depicts.  That same chrome is highly reflective, in a way that visually breaks up the mass of the facade into a set of variations, cleanly illuminated bands next to reflections of neighboring buildings and elements of shadow. 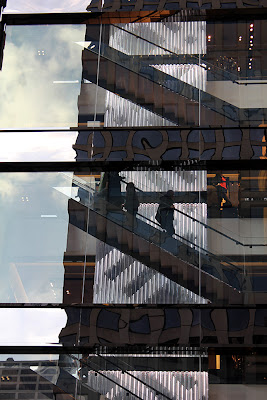 At night, the building has a certain magic.  The insistent white metal dissolves into gradations of black, as  the building becomes a dark, permeated fortress.  Unlike the usual mass-market backdrop of an almost clinical, foot-candle overload of whiteness, the amber elements of Burberry's interior seep light through the facade in an almost liquid way. Even as the intricate geometric banding of the Tartan check locks down the facade like a chastity belt, the warm shafts of light offer up a "come-hither" look that suggests you might actually be in for erotico-shopping fulfillment. 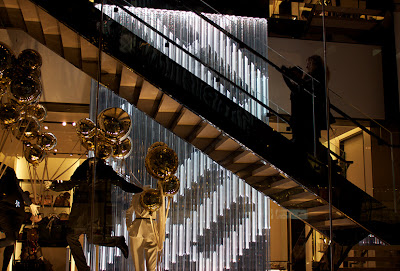 You want tasteful?  Try Lucien Lagrange.  I'll take Burberry's stew of money-grubbing and elegance, the subtle and the insistent, any day. 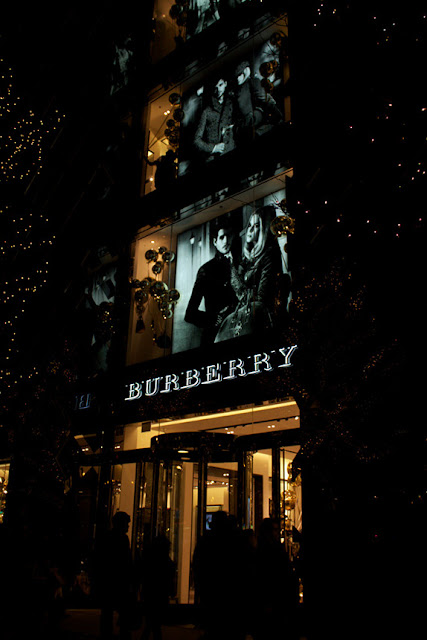 Also on ArchitectureChicago Plus:

Burberry's new store is a nice addition to the Mag Mile and this review is an excellent alternative to what the Trib had to offer last week.

I wish my comment could be one of those bitchy cat "mmrrroww" sounds wherein the giver pantomimes a paw scratching...but it just doesn't translate well into the written word.

I'm not usually one to post commnets, but this is an exceptionally well-considered and well-written archtiectural review. I first read the Tribune critique and was astounded by the dismal photograph they selected. I kept looking for a galery of images, but there was just one poorly composed detail shot that didn't offer any context. This is a far superior review, and I have newfound respect and appreciation for aspects of the building i hadn't previously considered. well done!

This is the architectural equivalent of The Expendables. We're are going to wreck havoc with our massive budget- and we gotta great pyrotechnics guy! ....but if you want to a good story go see Flight.

I really disagreed with the Chicago Tribune's architectural review of the new Burberry store - I think it is outstanding and a big plus to Michigan Avenue.

I first read the Tribune critique and was astounded by the dismal photograph they selected.
William S. Hart High School Senior Portraits

I think that Burberry's new building is a most welcome addition to Michigan Avenue. I really like the design. BUT, I am so sick and tired of hearing about how wonderful this part of Chicago was "years ago." I do have pictures of Michigan Avenue in the 30's and 40's and 50's where taverns, counter restaurants, and gas stations lined up along the "Avenue." There were no trees, no "boulevard" and lots of surface parking lots. Take a look!

Thanks for taking your time writing this post! Cheers, coupon and voucher
Also, feel free to visit my blog http://getmcdonaldscouponsfree.wordpress.com/