I've just decided that I won't be able to finish up my story on the winning entries to the Chicago Architectural Club's bus rapid transit shelter competition until next week, so for this weekend - in addition to this year's Chicago Blues Festival and the Printers Row Lit Fest, here are a few more great things to visit in Chicago.
It's been almost two months, but Millennium Park's Jun Kanecko Exhibition is finally open, and it's a wonder.  Opening day, April 12th, there was an accident involving some idiot climbing on one of the colorful, oversized ceramics, and the show was shut down to allow all the sculptures to be more securely seated. 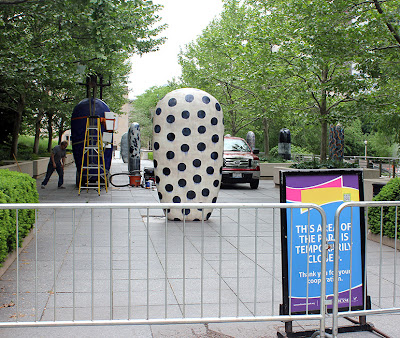 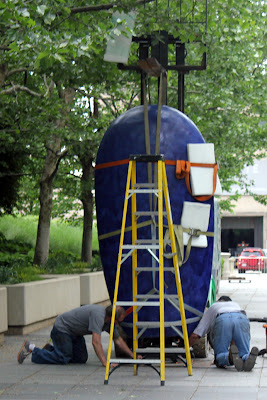 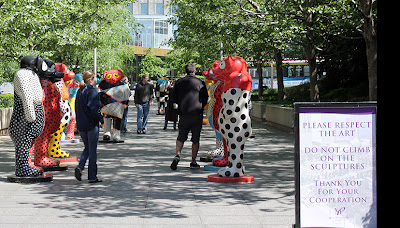 Dango means ‘rounded form’ or “dumpling’, while the Tanuki ‘is considered to be a trickster who causes trouble and mayhem in both the human and supernatural worlds,’ which will probably be the legal defense of the person who damaged the art - ‘a Tanuki made me do it’.  It's a delightful addition, running through November 3rd, as custom-made for photo-ops as Kapoor's bean. 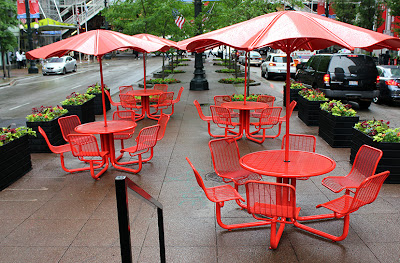 Meanwhile, over on State Street, art meets street furniture in something called “The Gateway” an experiment in placemaking from the Chicago Loop Alliance designed to mark the entry into the Loop at the expanded median just south of Wacker and a way to animate an underused asset with fire engine red tables, blue chairs, and, perhaps most importantly, active management by a cleaning team and support staff from 7:00 a.m. to 10:00 p.m. daily through September, providing an Al Fresco meeting place for patrons of neighboring restaurants and fast-food joints, including a soon-to-open Chick-fil-A in the Page Brothers Building . . . 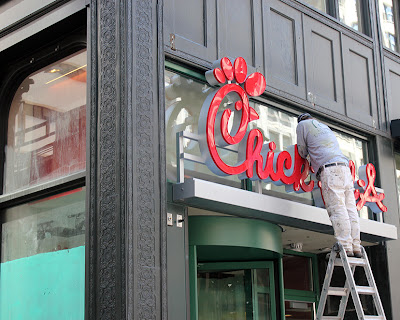 . . . where yesterday morning finishing touches were being applied as uniforms, personally addressed to each new employee, were arrayed along a window-side counter. 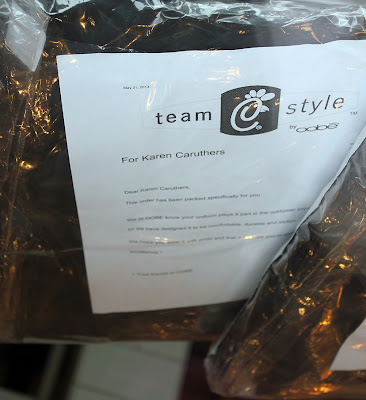 Our last item today may be the most interesting. 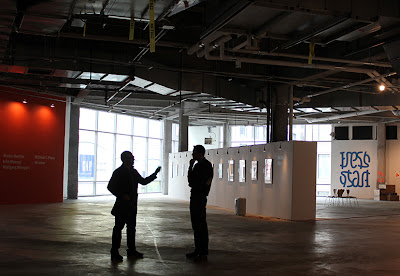 The Chicago Loop Alliance has taken on a 17,000-square-foot, never-occupied space in the tenant-challenged Block 37 complex that  to create Block Thirty Seven, a Pop-Up Art Gallery curated by the Chicago Design Museum.  Currently on display is a great show featuring the work of graphic designs Marian Bantjes, John Massey, Michael C. Place and Wolfgang Weingart, as well as a special exhibition, Re/View focusing on optical illusions.  Tomorrow, June 8th, from 2:00 to 4:00 p,m, the gallery will feature a talk by designer, typographer, writer and illustrator Marian Bantjes to kick off Chicago Design Week.  Tickets are $20.00. 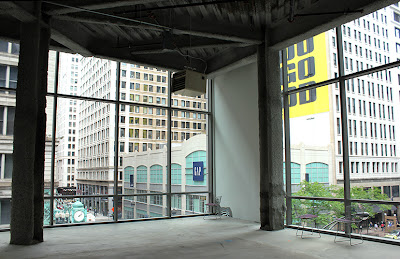 This is an incredible space, with spectacular views onto State and Washington streets through huge, floor to ceiling windows.  It's entirely raw, and all the better for it.   We wish, of course, Block 37's new owners, L.A.'s CIM Group, the best of luck in finally leasing the upper reaches that have remained pristinely free of tenants ever since the mall opened in 2009, but in the interim, Block Thirty Seven is a major addition to the life of the Loop, with enormous potential.

Can Signage Save Block 37?
Block 37 - The Curse Lives!
The Entombment of the Plug Bug
Planning and its Disconnects: The Cautionary Tale of Block 37