The Chicago River is more an idea of a river than a natural one.  As the city grew, the river's  sleepy, meandering character was obliterated, sacrificed to the industrialized efficiency that fuels and shapes a boom time.  You can see it best downtown, where the winding river was refashioned as a highway to the lake, nature's imperfections engineered away for a channel where the banks are concrete and the flowers tall skyscrapers rising flush to the water's edge.

As you move out into the neighborhoods,  the visual markers may be less evident, but the process was the same.  In the early part of the 20th century, the North Branch of the Chicago River was straightened, redug, and deepened to increase capacity to handle the dramatically increased flow from the North Shore Channel that merges with the river just south of Foster. 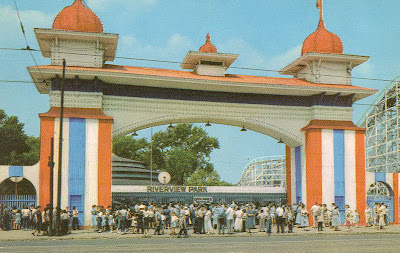 Until 1889, Belmont and the river was just outside the Chicago city limits.  The surrounding neighborhoods had been settled largely by German immigrants, and a group of Prussian War veterans bought 22 acres along the eastern bank of the river north of Belmont to serve a shooting range for hunting game in the woods and hitting targets erected on an island in the middle of the river.   Showing up on a 1902 Rand McNally map as North Chicago Schuetzen Park.  Residents began to ask if the park could also be used for picnics, and when ownership passed to two of the association's members, swings were added to give the women and children something to do while dad was out decimating the wildlife.  A carousel was added, and in 1907, a $550,000 investment resulted in rides and attractions were added to what was renamed as Riverview Park, which quickly began a Chicago summer institution, billing itself as the ‘world's largest amusement park’.
Although I was incredibly young child, I still remember, amidst the roller coasters and haunted houses, my parents hustling me quickly past ‘The African Dip’, and my confusion seeing the black men sitting on swings, loudly hurling insults at passing patrons to get them to buy a few balls and the chance to hit a target and see those swings break open and their tormentors dropped into a drenching dunk tank.  According to one account, it allowed all of Chicago's often antagonistically diverse ethnics - the Poles and the Irish, the Italians and the Swedes, the Czechs and the Serbians -  to all come together in solidarity as ‘white’ people avenging the offenses of colored folk.  It's said that when the NCAAP finally got the attraction closed in the late 1950's, it was the most lucrative in the park's history, and the then unemployed black taunters lost incomes of over three hundred dollars a week.

As the 1960's dawned, blacks were not on display, but patrons, and Riverview remained a beloved Chicago institution whose annual opening day was probably more keenly anticipated by the city's kids than that at Wrigley Field or Comiskey Park. Then, suddenly, days after closing for the season in 1967, Riverview was sold to an investment group for $6.5 million, and demolished in quick order. 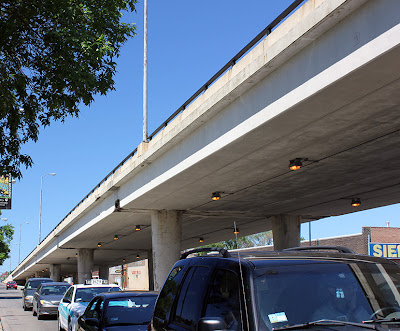 Its only memorial is the looming Western Avenue overpass.  Built in 1962, it served its purpose for only five years, but endures to this day as a makeshift memorial as inscrutable as Stonehenge, long-slated for demolition, a lack of funding its recurring reprieve. 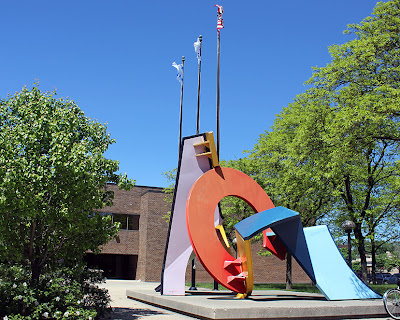 In 1975, a new 19th District Police Station opened on Belmont, with a large sculpture by Jerry Peart named Riverview.  The station was closed last year by Mayor Rahm Emanuel in a cost-cutting move.  The Cook County Court First district remains.   The Riverview Plaza strip mall opened in 1981, anchored by a Dominick's, which shut down the Riverview way - with no prior notice - in 2010.  A year later, it became the first Chicago location for the expanding Mariano Fresh Market chain.

More recently, Devry University and its Keller Graduate School of Management have added a major new building on the site, which makes me wonder if it's some kind of sly allusion to the sometimes Potemkin Village qualities of for-profit education. 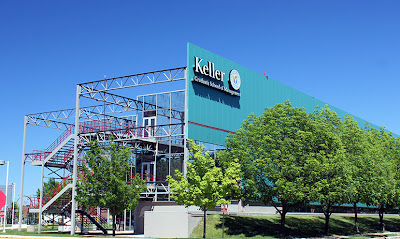 Keep walking down Melrose, however, and you enter through the trees to a different world, a wonderful, not overstructured riverwalk. 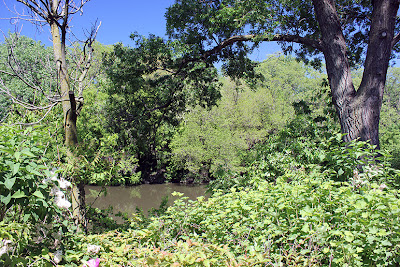 The Chicago Park District purchased 3 acres of the former Riverview site in 1969, added another 6 twenty years later, and leased additional land from the Metropolitan Water Reclamation District to create Richard Clark Park, 19 riverfront acres named after an office from the Belmont Tactical Unit who was killed in the line of duty.  Its soccer fields and bike trails are used both by residents and by the students of nearby Lane Tech. 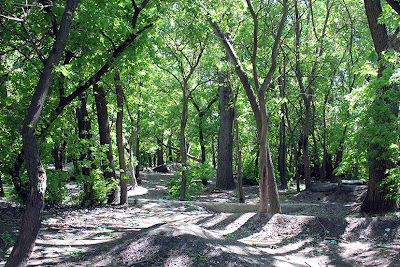 The growth along the edge is dense enough to largely conceal views of the river, but as you move further north you come across what is, to me, the park's true glory, a dense, forest-like section that lets you forget you're in the center of the city.  This is the The Garden Chicago Dirt Jumps, Chicago's first dedicated bike park, a collaboration between the city, the Park District, and Chicagoland BMX and Mountain bikers.  It offers BMX bikers a series of dirt jumps, some of which are said to have been constructed from remnant stubs of the foundations of Riverview Park.

Try to move north from The Garden, however, and you're stopped by chain-link fence, through which you can see the ongoing construction of a major new boathouse, design by Jeanne Gang and Studio/Gang Architects. 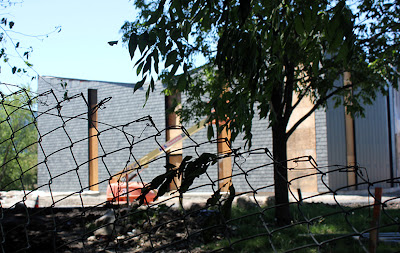 A funny story about that boathouse.  For years, the Clark Park Advisory Council, a group of local activists supporting the park, had been working with varied success to get the Park District to provide a number of minor improvements to the park, including replacing the yellow trailer that served as a concession stand and the metal containers used for storing canoes and kayaks.
At a public meeting in 2011, the Park District presented plans for a new 4,000 square-foot  building to accommodate these needs, set back from the river's edge with a narrow launching ramp.
Victory at last.

Then in September of 2011, Mayor Rahm Emanuel announced plans to build no fewer than four boathouses, each coasting $4 million, across the city.  Two - at Ping Tom Park and River Park - to be designed by Johnson and Lee, and two to be designed by Studio/Gang - one around Ashland and the south branch, and the other, at Clark Park.

When the Advisory Council asked for funds for a monument to Richard Clark, they were told there wasn't any money.  Now, for the Mayor's initiative, the funding floodgate opened full blast.  By the time the new boathouse was approved by the Park District, the "not-to-exceed" price tag had soared to $9.45 million, including $2 million in funds from Western Avenue South TIF, along with a share of $2 million in unused funds for the cancelled 2012 NATO Summit, and a $1 million contribution from Brian Gamache, CEO of WMS Industries, whose headquaters buildings overlooks the site from across the river. (Already some websites are referring to it as the ‘WMS boathouse,’
What was originally a 4,000 square-foot facility is now a 20,000 square-foot, multi-level complex with a wide concrete esplanade leading down to a floating boat launch that looks to be over a hundred feet long.  In a park that's not quite twenty acres, the boat house and its support areas will now take up two.
As usual, Gang has come up with a design that is striking, sustainable, and poetic.  The distinctive form of the roofline draws  on the dynamics of rowing.  As described on the Studio/Gang webpage . . .


The design for the boathouse structures translates the time-lapse motion of rowing into an architectural roof form. In addition to providing visual interest, this form also offers spatial and environmental advantages. With structural truss shapes alternating between an inverted “V” and an “M”, the roof achieves a rhythmic modulation that allows southern light into the building’s upper clerestory. The clerestory glazing warms the floor slab of the structure in winter and ventilates in summer to minimize energy use year-round.

Once the steel trusses began to rise at the beginning of the year, construction has been proceeding at a fast pace. 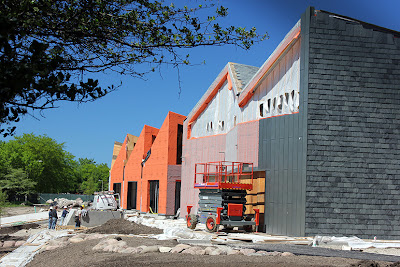 While the warm orange color is only temporary, awaiting the final stone, the peaked roof of the boathouse is already a visual landmark along the river, creating an “ah!” moment as the building reveals itself in the clearing. 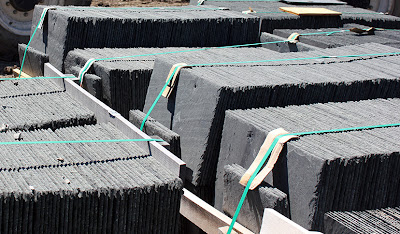 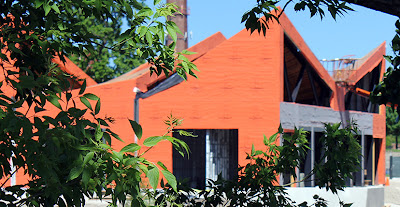 Visualize it alive with boats, kayakers and rowers and their boats and you can see a new dynamic energy coming to the river.  It's transforming Clark Park from a quirky neighborhood amenity to a flagship anchor of a new - and decidedly upscale - vision of Chicago's future urban fabric. 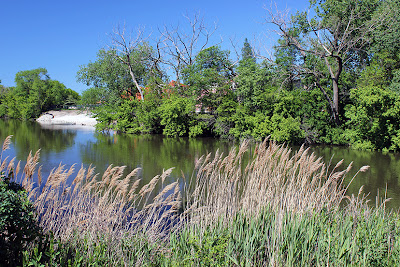 There have already been transformations on the West.  South of Addison, there's still the massive Exelon high-voltage facility. 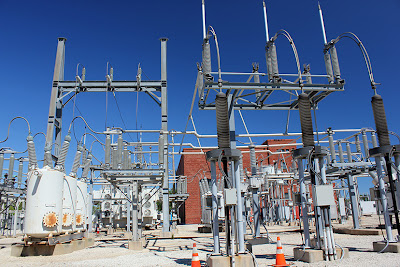 While at Roscoe and California, patrons line up for the sausage du jour at Hot Doug's. 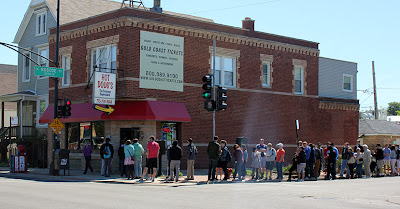 And down the street, at the riverbank, there's the gleaming new headquarters Solomon Cordwell Buenz created for WMS Gaming, a $35,000,000, 120,000 square foot structure, made possible with a $3.8 million tax incentive, that provides a visual counterpoint to the boat house directly across the river. 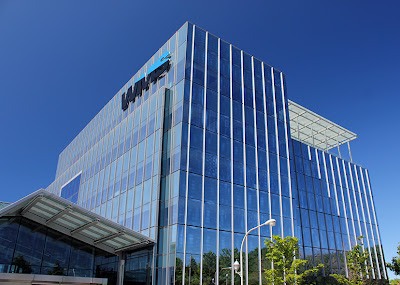 Shortly after the building was finished, WMS, a maker of slot machines and video gaming devices, was bought out by Scentific Games, ‘the leading integrated supplier of instant lottery tickets, online lottery systems, video control systems and pari-mutual wager systems and terminals . .  ’ for $1.4 billion.

To the south, there is the Belmont River Club, constructed at the turn of the 21st century on former industrial property, with over a hundred condos and townhomes.  From the lovely jogging path that runs next to it, you gaze out to the river, and to the dense, tall trees along its eastern bank that muffle the sounds of the city and let the birdsongs float cleanly within the soft rustling of leaves. 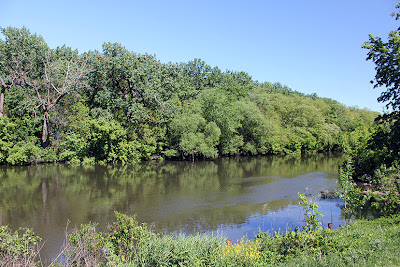 The day I was there, I didn't see a single boater.  You could  easily imagine yourself not in the city, but along a secluded rural waterway.  Then I imagined what that scene will look like, colorful and festive, as that same stretch of river is jammed with rowers and their long boats when Clark Park sponsors its first regatta.  For a moment, I thought I saw the ghosts watching them from the bank, heard the gunshots of hunters and the screams of passengers speeding down The Bobs.  Then it all vanished, and it was again, for the moment, just the quiet river. 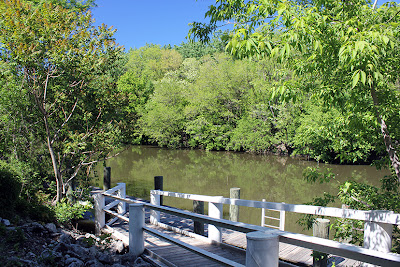