In the Age of the Supply Chain, is there any room for Gratitude? John H. White at Chicago Sun-Times Rally


Pulitzer-Prize winning photographer John H. White usually achieves eloquence, not through words, but through the images he captures through the lens of his camera.   Unlike most of us, he pauses to think before he speaks, and chooses his words with deliberation.  Still, White has become the rallying point in the outrage over the decision of the Chicago Sun-Times to fire its staff of professional photographers in favor of iPhone pictures taken by reporters or sent in by the general public.

It was White's words of gratitude that brought a respectful silence to a Thursday, June 13th rally at the plaza of the James R. Thomson Center, and put the situation into sharp perspective.

Gratitude is a concept that's largely disappeared from today's commerce.  A company, to be sure, is in business to make money.  When we pick up a newspaper, or read it on-line, we've executed a commercial transaction. We've paid our money and expect value for it.  We don't say “Thank you” to the people who created it, any more than when we put on a shirt, or eat a plum, we thank the seamstress or the farmer.  As if we even know where we could  find them.
At the deep end of the Age of the Supply Chain, gratitude, or even respect, has become a sentimental artifact, as has, seemingly, the very idea of an individual worker having value.  Every point of the process of production is standardized, consolidated, and abstracted.  Efficiency, not man, is now the measure of all things.  When price is driven down towards zero, the margin for excellence disappears.  The quest for the ‘insanely great’ becomes a spreadsheet pursuit of ‘what's the least we can do and still survive?’ It is not a coincidence that announcements of layoffs usually spike stock prices.  At every point of exchange, at every level of production, the primary dynamic of the Supply Chain is to eliminate human labor to the greatest extent possible, and commoditize and drive down wages of that which remains. 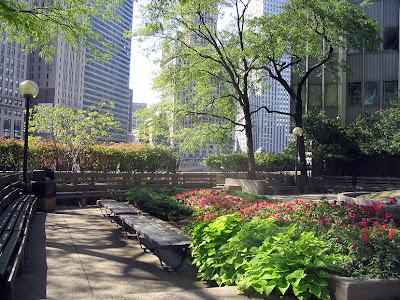 Hence we have Chicago newspaper reports on community sports events being created by people in the Philippines being paid pennies an hour.  We have a major daily - the Chicago Sun-Times - that hollows itself out as it struggles to survive, becoming less a newspaper than a collection of financial stratagems.  Business content created by a separate subsidiary, centered on a Sunday magazine consisting primarily of fawning portraits of corporate executives.  Arts and dining content taken from the Chicago Reader.  The entire ‘Nation and World’ confined to a single page or less, much of it devoted to a bizarre map flagging the origin of individual stories.  Ironically enough, the most consistently professional part of the paper may well be its Splash society section, printed on thick paper, the better to reproduce color photographs of the beautiful people, no small number of whom are probably part of the consortium that bought the paper to keep it from going down the tubes.

But, in the end, what remains of the Sun-Times?  A thinning veneer of star columnists, reviewers, and reporters wrapped around a collapsing center. 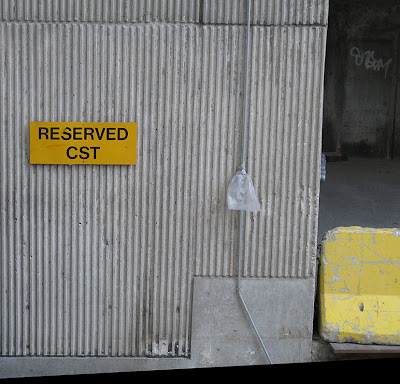 Apologists, experts and realists all agree:  It must be so.  In their Panglossian haze, nothing that's happening, no matter how troubling, can be anything other than the best that can be expected.  Resistance is futile.

And it is true, we cannot go back to where we were.  We will never again have four competing dailies.  The strangely reassuring sound of a thick brick of newsprint hitting our doorstep each morning is not coming back. The trees thank you. 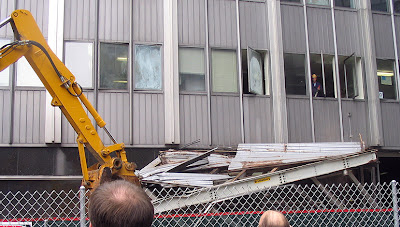 But there is not, as the corporate feudalists would tell you, only one path - their path- to the future.  And when the supply chain that once made life better for everyone now seems only to add to America's 60,000,000 low wage workers, when it stops building us up and instead eats away at muscle and bone in the pursuit of better margins, when it transforms the pursuit of excellence to a lowest-common-denominator ‘good enough’, then passive acceptance is no longer an option, lest we descend to the beggar's world described by Bertolt Brecht (via Marc Blitzstein) . . .


What keeps a man alive?
He lives on others.
He likes to taste them first,
then eat them whole if he can.
Forgets that they're supposed to be
his brothers.
That he himself
was ever called a man. 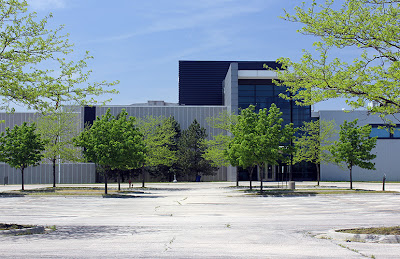 The Sun-Times decided John J. White was unnecessary.  If that's what happens to the best of us, what kind of future awaits the rest of us?  Yet at Thursday's rally, White found room for hope, even after having taken a major blow, in people coming together in common cause.  “I never knew until today,” he said, “that you could fly with broken wings . . . your kind words gives fresh wind to our wings.”

Thanks for documenting this....and noting its importance.