Update [6/12/13]: filming is reported to be taking place at Hilberseimer Abnegation Village June 13-15 and again on the 19th.  Let's hope there's no storm damage today.
The good news?  It's the first development on the south Loop site since Grand Central Station was demolished in 1971.  The bad news?  As Alfred Hitchcock used to say consoling one of his overstressed actors, “It's only a movie.” 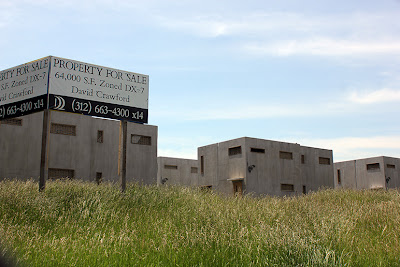 You've probably already seen pics of this small housing village.  It was constructed for the movie Divergent.  Directed by Neil Burger - as Blair Kamin would inevitably find a way of telling you: he's a Yale graduate - who also made 2006's The Illusionist and 2011's Limitless, it's based on the novel by Veronica Roth.  Born in Barrington, she reportedly wrote Divergent while studying at Northwestern.  It's part of an award-winning trilogy  (the final volume, Allegiant, is scheduled to be published this coming October) that Lionsgate studio is  hoping will blossom into a lucrative, Hunger Games-type franchise.  Divergent's cast includes Shailene Woodley, Theo James, Maggie Q, Ashley Judd and Kate Winslet.  $40 million of the $80 million budget was said to be spent on the 6o days of shooting in Chicago, which began in April.


Set in a futuristic dystopia where society is divided into five factions that each represent a different virtue, sixteen-year-olds have to decide if they want to stay in their faction or switch to another - for the rest of their lives.

In the novel, teenagers must choose between the Amity (peaceful), Abnegation (selfless), Candor (honest), Erudite (intelligent), and Dauntless (brave) factions, but there are those known as Divergents, who don't fit into any one of these particular groups. 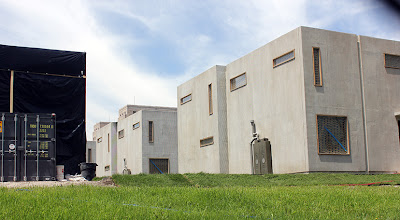 Apparently, that ‘futuristic dystopia’ is actually Chicago, at a time when institutions have broken down and TIF funds exhausted, but the upside is that they've finally built close-in housing for all those people who went missing when the CHA projects in which they lived were demolished. 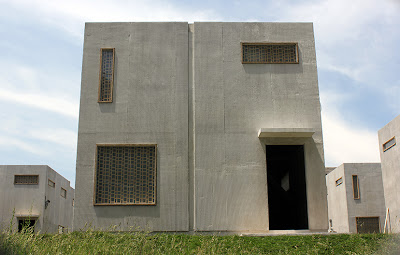 The irony is that Divergent's housing is actually more attractive than some real projects I could name.  You can tell its fiction because in the actual Chicago you'd never find an affordable community like this composed entirely of detached units. 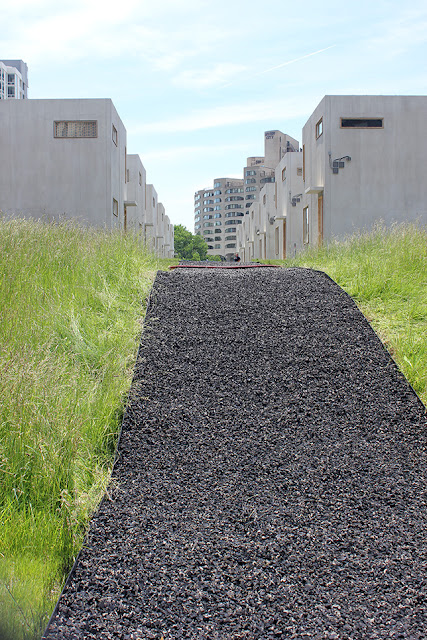 Us neighbiors were briefly scared. And it closed off an unofficial dog park!!

soon dogs may be the only residents.

Not the only ones, with all the rabbits in the area. And from time to time there may be folks camping, shall we say, along the riverbank there.