Icehendge? Chicago has a new Frank Gehry, and it's Like Nothing You've Seen

We got a tip from a reader to check out what was going in the lobby of the Inland Steel Building, the 1957 jewelbox skyscraper at Dearborn and Monroe designed (separately) by Walter Netsch and Bruce Graham of SOM.  She wasn't exactly thrilled, and was wondering if we should write a complaint to architect Frank Gehry, who admired the building so much he became part of a consortium of new owners in 2005, and retains a 5% ownership stake. 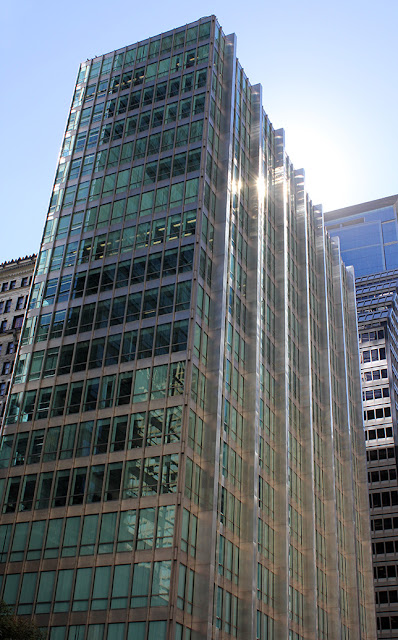 What was going on in the lobby was the installation, earlier this month, of a new security desk.   Not normally a subject for controversy, except that this was no catalog item from Office Depot, but a striking assemblage of elements of glass one Facebook observer has dubbed ‘Icehendge’. 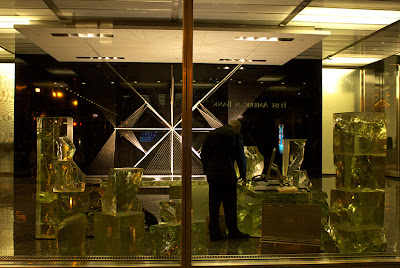 And I don't think there'd be much point in complaining to Frank Gehry, because, I've been told, he designed it.  From what I've heard, it's intended as a visual a counterpoint to Richard Lippold's Radiant I, commissioned for the building in 1957 by Inland Steel VP and noted art collector Leigh Block. 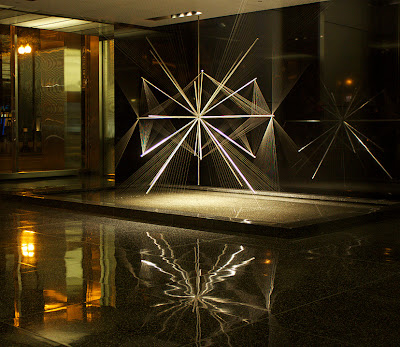 Radiant I's relationship with the building's lobby is original and integral.  According to a 1963 New Yorker profile by Calvin Thompkins, early in the design process, Block asked Lippold to tell him what he needed.


Lippold said he would like more space, and, to his amazement, the builders agreed on the spot to push the lobby wall back eight feet . . .‘Radiant I’ is a thirteen-by-fifteen-by-twenty-four foot construction of gold, stainless steel, and enameled copper set over a rectangular reflecting pool, and in the opinion of Lippold, Inland Steel, and nearly everyone else it is a complete success; it convinced him that he could do his best work in collaboration . . .

Lippold wrote in a magazine article that to have that collaboration to be a success, the artist must “attach his work so tightly to the building, in similarity of proportion, material, and technique, that try as he might, the user cannot pry it loose [visually] and thus is forced to move though the sculpture or the painting, to the building, and, of course, back down through it again to himself . . . The architect's responsibility in this is simply to allow the artist to achieve this double rapport.” 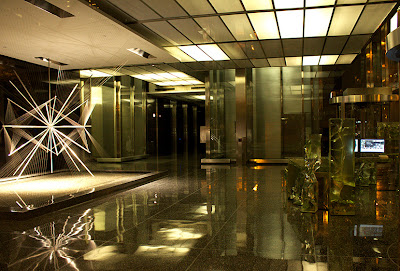 Radiant I definitely meets this goal.  It both reflects and is reflected in the polished stone of the walls and floor.  A small drop ceiling hovers above it as if kept aloft by the sculpture's energy field, which seems to radiate out beyond the physical object to take in the farthest reaches of the lobby.

The Frank Gehry reception desk, on the other hand, is a study in contrast and assimilation.  It's placed at the far end away from the Lippold, along the south window wall and entrance doors.
It was lovingly fabricated by the craftsmen of the John Lewis Glass Studio of Oakland, California.  You can check out a fantastic gallery of photographs of the work being assembled, shipped, and placed on the John Lewis Facebook page.  (Their next Chicago job is renovating the brick at Crown Fountain in Millennium Park) The 14,000-pound work in the Inland Steel  lobby is made of emerald-colored glass, cut down from 6-foot-high blocks into Gehry's famously crumpled forms, arranged as a sculptural work area and enclosure for the security guard, whose video monitors look painfully, plainfully outshone.  Especially at night, the interior composition of the glass refracts color and light like a finely-cut gem. 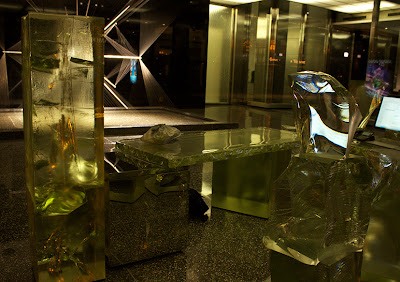 I'm sure - Gehry or no Gehry - the installation will be controversial,  but because of the way the reception desk is set against the perimeter, you can still easily find views into the lobby that pretty much bypass Gehry's work and let you enjoy the original composition.  (And without that huge  purple metallic artwork that used to set the back wall of the elevator lobby aglow.) 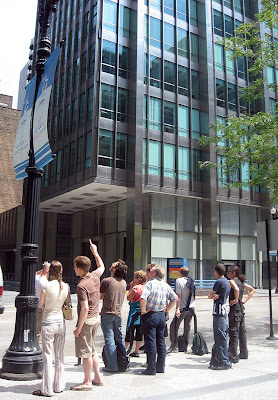 The Inland Steel is in the midst of a major renovation to bring its functionality up to current standards, but as an officially designated Chicago Landmark, the original feel of the design, right down to the original single-pane windows, has had to be scrupulously maintained.  It's important to remember that the Inland Steel, one of the glories of Chicago Architecture, was in its day a gloriously radical statement, and that statement is being preserved and restored.

As an autonomous object, the Gehry reception desk is an intriguing work. Inserted into the relentlessly angular grid of the Inland Steel Building and its lobby, it's also a subtly subversive one, providing a small explosion of the 21st century into the late 1950's vision of Netsch, Graham and Lippold.  While not changing their vision in any way, it keeps it from being embalmed as a museum piece.  It's like the young cat introduced into a household dominated by a beloved aging feline - the relationship is often uneasy, but it invigorates both.  Even as we're left to admire how things once were at a snapshot point of architectural history, the Gehry reminds us how things have changed, as it places past and present in dialectic tension.

And, of course, it's reversible.  It's furniture, not structure, and if it ages badly, it can be carted off, respectfully, long after Frank's gone.  My sneaking suspicion, however, is that once we get used to it, it will become one of those funky objects beloved by the Chicago public. 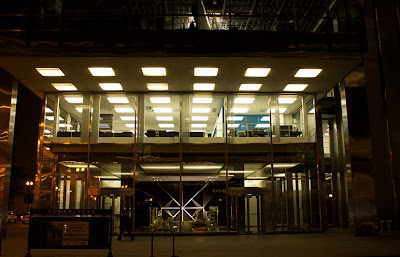 What do you think?

Great to know the -- in depth from this blog.This will really help for my forward steps to be taken.free youtube views

Visited this wonderful building in June without knowing anything about the Gehry desk. Noticing it, I thought: oh dear, they got that wrong. Ice and steel? It's such a lumpen counterpoint to the Radiant sculpture that it seems like a bad joke. Well, as you point out, it can easily be removed and it is at the edge of the space...Something, I suppose.

One of the best details about this building: in the bathroom stalls, the door latches are also cigaeette holders and ash receptacles. After you;re done sitting and smoking, flipping open the latch casues your ashes to fall into a little box. Made of stainless steel, of course, in keeping with the design of this corporate headquarters.