In a ceremony complete with organ and brass fanfares resonating in the reverberant sanctuary, Chicago's Second Presbyterian Church Thursday evening unveiled the plaque for its designation as a National Historic Landmark.  (Ironically, it's awaiting pro forma approval from the Commission on Chicago Landmarks - it was designated in 1977 - before mounting the plaque on the building's exterior.) 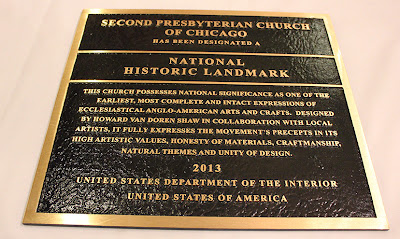 The 1874 church,  with a new interior by Howard van Doren Shaw created after a disastrous 1900 fire, goes from a class of 80,000 in its previous listing on the National Register of Historic Places to a far more elite group of 2,500 National Historic Landmarks.  “Second Presbyterian is the only church in Chicago to receive this distinction,” noted Linda P. Miller, President of Friends of Historic Second Church, a volunteer organization that works both to support and publicize the structure.
It's only appropriate, as Second Presbyterian, at 19th and Michigan, was born out of elitism.  It was the church of the Chicago's 1%, just blocks away from the Prairie Avenue mansions of the likes of Pullman and Glessner.  It was after the death of meatpacker George Armour that the church's two-ton bell- in use to this day - and its tower were funded by his family.
It was the wealth of the congregation that accounts for the splendor of Second Presbyterian's interior.  After fire raged through the church in 1900, noted Chicago architect Howard van Doren Shaw, also a member, was brought in to repair the exterior and replace the gutted interior, no expense spared.  Shaw made the church more intimate in scale by lowering the ceiling, the clerestory windows and the proscenium. He rejected Renwick's Gothic style for that of the emerging British Arts and Craft movement, giving it a distinctively American spin.  The composition is dominated by Frederic Clay Bartlett's 30-foot tall, 40-foot wide, Tree of Life mural, from 1903, painted directly onto the cured plaster wall of the apse, culminating in a rainbow and a choir of angels, among the no less than 175 different angels throughout the church, painted, sculpted, carved and in glass. 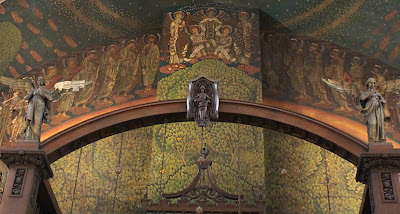 The glory of the church is its stained glass windows, a number of them from Louis Comfort Tiffany and his studio.  The oldest, dating back to 1894, was the sole survivor of the 1900 fire.  A design by Louis J. Millet was added in 1905, and two by Edward Burne-Jones installed in 1913. 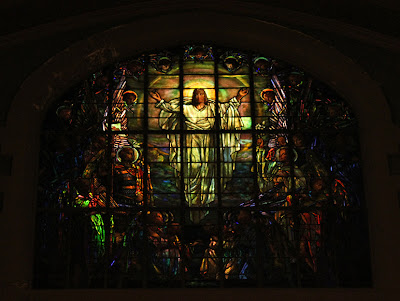 Even at is peak, at 792, Second Presbyterian's congregation was far less than the 1,300 seats in the auditorium.  Over time, as the area became more industrial, the wealthy fled, the mansions demolished or turned into boarding houses, and Second Presbyterian's membership declined.
Although in 1901 Booker T. Washington was invited to Second Presbyterian and drew a turnaway crowd, it wasn't until 1958 that the first Afro-American was admitted to membership, a late catch-up as the racial makeup of the community had been changing.  Soon the survival of a treasure built by millionaires had become the responsibility of a largely poor Afro-American congregation.
At Thursday's ceremony, Roosevelt Ferguson, President of the church's board of trustees, remembered a time when churchgoers had to contend with falling icicles during the worship service.  “We only had heat on Sunday morning, and there used to be a huge icicle hanging in the southeast corner.  The heat would cause the icicle to melt and fall.” 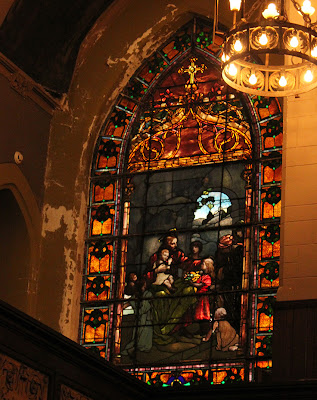 Ferguson recalled the church considered three options: close the building and donate it back to Presbyterian hierarchy, move the sanctuary to the McCormick Theological Seminary site at Halsted and Fullerton - which McCormick sold to DePaul University in 1975 - or remain and tough it out, which was, thankfully, what they chose.  A series of loans were arranged to do essential tuckpointing.  When the loans came due, repayment was refused, and the funds were able to be redirected to replacing the mesh over the priceless stained glass windows.  “We had to replace the iron mesh,” recalled Ferguson, ”because the kids in the community when they passed the building would challenge each other to see who could a get a rock through the old iron mesh and hit the windows.” 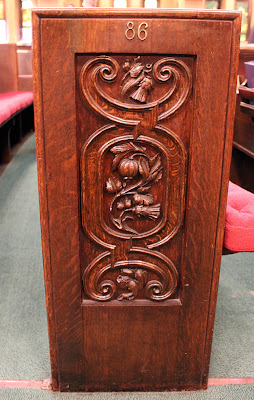 Unlike, say, Fourth Presbyterian, which has had the luxury of a retaining its wealthy congregation and now finds itself site smack in the middle of Chicago's primary shopping street, Second Presbyterian gets far fewer visitors than it should.  At Thursday's ceremony, several of the speakers mentioned this was their first encounter with the interior, and they were awestruck.  I was one of them. 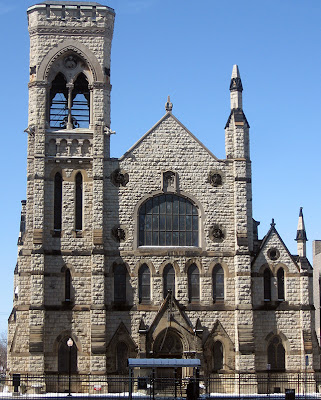 The fact that the exterior, truth be told, is more imposing than graceful, probably doesn't help.  Today, even as the community around it undergoes an accelerating gentrification, Second Presbyterian is maintained by a small membership and group of volunteers.  It's hoped that the National Historic Landmark designation will help bring more of us to encountering - and supporting - one of the greatest spaces in Chicago.


Second Presbyterian Church has worship services ever Sunday at 11:00 a.m.  under the direction of Interim Pastor Rev. Dr. David M. Neff.  In the fall, the church's Sunday afternoon concert series, Sounds of the South Loop, is scheduled to resume a new schedule.  In addition, Friends of Historic Second Church offers guided tours,  Wednesday and Saturday at 1:00 p.m. (holidays excepted), and every Sunday after services (approximately 12:15 p.m.)  Brochures are also available for self-guided tours during the hours the church is open.

The architecture of this Church is simply gorgeous. I got married here August 2 and the pictures are all breathtaking.

The congregation is very diverse (which I like) and filled with very caring people. Also, there are more professional young adults from the neighborhood beginning to attend the Church.

I currently attend medical school in another state, but whenever I am in town, I worship in this Church with my husband because I always enjoy the worship service and the people.