The Bankers Building: Improv of Decrepitude

How can something so ugly be so compelling?

When it opened in 1927, Burnham Brothers' Bankers Building was a prestige location.  At 41 floors, it rose almost 200 feet above the great dome of Henry Ives Cobb's Federal Courthouse, just across the street.  At 476 feet, it remains the tallest Chicago building to be clad entirely in brick. 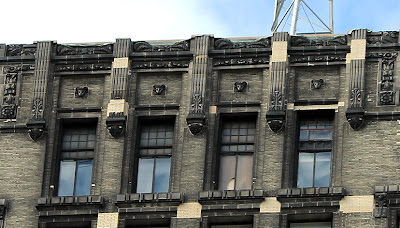 Which may not have been an entirely good idea.
Despite generally high occupancy rates, time hasn't been kind to the 442,000 square-foot structure now known by its intersection as the Clark Adams Building, much it now taken up by the Club Quarters, Chicago Loop hotel.

The heroic, if weathered, figures still crouch on either side of the globe in the relief high over the entrance, but over time, there's been a substantial crumbling of that brick facade, especially at the corners, and as new replacement brick has been inserted, the color mismatch makes it look like the skyscraper got an on-the-cheap fix-up by somebody's brother-in-law.  When was the last time the building was cleaned?  And if it were, would it just make it worse?

Set between the cool perfect limestone of the Field Building to the North, and the even cooler, even more perfect flat-black graphite metal of Mies's Federal Center to the East, the battered and bruised Bankers pulls itself up to its full height and feigns dignity even as it's attired in patches. Against the proud, often glistening towers of the flush Financial District, it's a memento mori nagging at the cityscape's leveraged bravura. 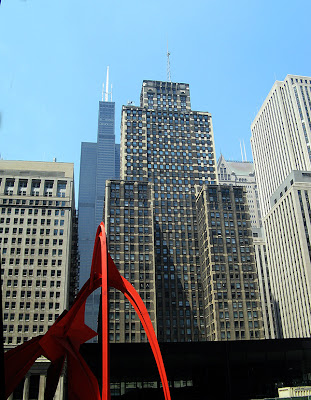